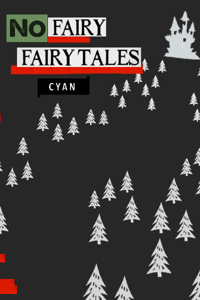 by Cyan of Mogh

A collection of fairy tales without fairies, featuring sequels to Grimm classics, retellings of foreign legends and more than a few original tales from my own head.

The wolf brutalized at the end of Little Red Riding Hood returns with robotic implants, desperate for revenge.

Snow White teeters on the edge of 40.

A Japanese fisherman saves a turtle and is rewarded two-fold: a guided tour of an underwater world and a shotgun marriage with a capricious princess.

Pirates of the Qing Dynasty era square up against a bold young nut-seller and a talking fox.

The legendary assassins of Alamut haunt a paranoid Sultan.

For every wicked act, a new white hair appears on a young woman’s head.

And many more tales that, if summarised, would make this blurb go on forever.