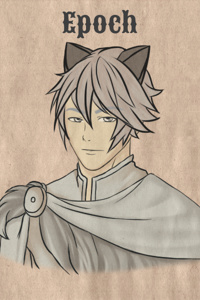 Epoch is a slow-burn LitRPG/Gamelit novel that tells the story of Luke, later named Lucius—a natural inhabitant of the game-like realm of Elyssia where thousands upon thousands of detached, virtually unkillable entities known as the Players were suddenly introduced right after the dusk of the magnificent Age of Heroes.

Shortly after the Players arrived, the balance of power in Elyssia instantly shifted. Kingdoms fell, wars were waged, alliances between races were made, and Lucius, after ten years of training in captivity, found himself being used as a pawn in a prophecy that he had no intention to fulfill.

With aspirations and desires of his own, Lucius must find a way to cautiously adapt to the drastic changes in the very foundations of the realm after being sent 300 years into a future that was forever altered by the outcome of the war that his captors had lost and the Players won in a victory that resounded throughout the ages, all for a terrible price.

As an avid fan of the LitRPG genre myself, I wrote this novel with character progression, heavy Gamelit elements, and some degree of world-building in mind. If you like these, please feel free to give this novel a try.

And wait, isn't this also an isekai story?

Well, it's all a bit complicated to explain here. Maybe you should start reading now?