Xiulan took another bite of rice and exhaled in pleasure. It was… well, it was perfect. Her back felt so good. Senior Sister’s Medicinal Qi had worked out knots she didn’t know she had, and it felt absolutely amazing. She had avoided any of Xiulan’s meridians, and focused merely upon her more mortal aspects, but it had done wonders.

She glanced around the table. Senior Sister was gesticulating at a medicinal scroll excitedly, and mentioning technical details of acupuncture. Master Jin nodded, focused entirely on her words, and asking the occasional question that, if possible, made her already bright eyes light up even more.

Disciple Gou Ren was lazing against Chun Ke and Pi Pa, having already finished his meal. He was tossing a stone up into the air and catching it as it came back down, humming to himself and looking content.

One hand reached down, and Xiulan absently patted Tigu, the cat long since having fallen asleep.

She didn’t know what she felt. Was she at peace? Or was she simple so drained that she couldn’t feel anything?

“Now, we just need a test subject for this.” Senior Sister said, purposefully pitching her voice higher. “Gou Ren~” She hummed, a vicious grin spreading across her face.

The disciple’s eyes widened with abject terror, and he flipped backwards over the boar, landing behind him like he was a castle wall and peeking up over his bulk at Senior Sister.

“Like hell!” He roared, his eyes searching for exits. “My face was stuck like that for a week the last time!”

Senior Sister winced at the accusation.

“His facial nerve is a bit further to the left than it is in the scrolls.” she explained, and turned back to him, “I made you meals for that entire week, didn’t I?” She asked, smirking at the boy.

The disciple kept glaring, not moving from his position behind his shield, but tilted his head to the side to conceed the point. He glanced out of the corner of his eye at Xiulan, something warring in the back of his eyes.

He pointed. “Take her instead.” He demanded, as if sacrificing her to a demon.

Xiulan froze as Senior Sister’s teasing attention turned to her.

“Oh?" Senior Sister asked. She stood, and walked over, her hips swaying slightly. Her gaze was predatory.

“Will you allow myself and my husband to examine your body... thoroughly?” She asked, licking her lips, her eyes roving all over Xiulan’s form. Her hands made odd grasping gestures.

“Yes, my body is at your disposal, Master Jin, Senior Sister.” Xiulan agreed easily. Master Jin choked, and Senior Sister recoiled, both of their faces flushing.

“Ah, that's no fun. You’re not supposed to agree. Where's the floating swords to ward us off?” Senior Sister complained, sitting down beside her.

She was not about to point actual blades at Senior Sister, but if this was some manner of game....

Xiulan focused intently. They were no treasures of her sect, that assisted her as loyal servants, but she managed to make her chopsticks float.

It was a good Qi control exercise. It was not childish. It was unbecoming for the Young Mistress to do such a thing, it was true… but she wanted to.

“...back? Back, foul demon, you’ll never take my body?” She asked as she concentrated, bringing her weapons to bear.

Senior Sister laughed, delighted, as the chopsticks bounced against her forehead ineffectually. She fell over anyway, as if defeated by the worthless attack. She was still giggling, her smile bright.

“And you, how dare you betray your comrade!?” she demanded, a smile starting to form. Her newest weapons levelled themselves at Gou Ren. He fled before her wrath, dodging around the room.

Her smile got wider. She managed to trap him, by adding a third, and striking him from behind. He fell over, an obviously false death howl escaping his lips. “Chun Ke, avenge me!” he demanded as he “died”.

The boar just snorted with amusement, and didn’t move from his position.

Finally, she turned her “blades” at Master Jin, and hesitated. He looked eager to receive her blows, holding a spoon up like a weapon of his own.

She tried to add a fourth, and the chopsticks wavered in the air. Her concentration failed entirely.

She paused, waiting for the rebuke for her failed concentration, but it never came. Instead, there was only laughter. Senior Sister hugged her from the side. She suppressed a flinch at the sudden touch, but it was no chastisement.

It was… pleasant. There was no grand politics. Just inane chatter, and talks of tomorrow.

She wondered if this was what the mortal soldiers did.

She yawned mightily, and nearly collapsed onto the table.

“Xiulan, go to bed.” Master Jin told her kindly, but chidingly. Her face flushed with embarrassment.

Yet she did as she was told. She climbed the stairs, one step at a time. Each step away from the light, and into the darker top floor was made with just a slight bit more trepidation. She entered “her” room, casting about in the darkness, and her eyes alighted on her little used bed.

She tried to sleep as little as her body would allow.

Grimacing, Xiulan got into the bed, exhaustion driving her to the brink.

She was back in the valley, again.

They had managed to catch three of the bastard’s raiding parties destroying them wholesale. The others, the groups that had risen to her call, had completed the encirclement, led by their own Experts and practitioners, ready to finally bring Sun Ken to justice.

Of course, it had been a trap. She was equal to Sun Ken in cultivation--that much was true. She could trade blows with the legendary Whirling Demon Blade. But some things only came with time. Time, and experience.

It was a desperate ambush. Sun Ken had been running out of places to flee to. The noose was tightening.

So he chose to fight. Chose to strike at the ones who had levied arms against him first, and hunted him for so long, for his pride would allow nothing less. He had spat in the Verdant Blade Sect’s face once. He couldn’t resist trying again. That “only a daughter” had been sent against him had his blood boiling.

The scream of “ambush!” split the air.

The rumble as the rocks fell. The howls of the bandits, their eyes mad, and spittle flying from their mouths from whatever combat drugs they had consumed. The hail of arrows. Then the impact.

Blood. Blood, blood, so much blood. Many of Sun Ken’s bandits, though cultivators they were not, had a little bit of Qi. Fueled by whatever they had taken, the bandits were mad, whirling demons. Their blades spun. They ignored wounds that should have killed them. They struck with absurd strength, for mortals, and the soldiers died.

The ambush was effective. Yet no amount of guile could match strength.

She danced among them. To these bandits, she may as well have been the heavens, for all that they could reach her. What she did to those vile men couldn’t be called fighting them, because that implied that they had a chance of hurting her.

Rice that was harvested, but every drop of her Qi she spent, cleaving through the men and intercepting attacks meant for allies was a victory.

And then Sun Rong had appeared. The lesser of the two bastards. So full of pride, and boasting about how he would defile her along with his brother.

Sun Rong was no Whirling Demon Sword. She met him head on, even after the slaughter had made her green blades crimson. She was stronger. She was faster, and even the amount she had killed before had not tired her. His mad spins were not befuddling. His footwork was poor. His foundation, built out of rape and murder.

He was unused to fighting people who could actually fight back.

The first exchange launched him backwards, and gifted him with three cuts along his arms. He tried again to strike, but had to throw himself out of the way again, as her blades closed like the jaws of some beast.

The transition from cocky strikes to panicked backpedaling had been swift. Yet his guard was good. Like he was used to a superior opponent battering him from all angles. He even managed to score a small hit along her chest as he died.

She turned to help her compatriots, when a roar of fury echoed through the battlefield. Sun Ken witnessed his brother’s death.

The screaming faces of the fallen, in that butcher’s valley, and the Demonic Qi that had invaded her soul.

The hands that grasped her legs, and the rising tide of blood.

This time, when Sun Ken’s blade struck, it bit deep.

Xiulan woke up, drenched in sweat.

The glow of happiness from dinner was a bitter echo.

As it should be.

She rose to a seated position, in the too dark, and suddenly oppressive room. She tried to breathe.

It was folly, her father had said, to dwell on such things.

It was a weakness of her heart. She was a cultivator! One who defied the heavens! A few deaths shouldn’t bother her!

If it didn’t bother you, you wouldn’t have made it a point to remember all of their names, would you?

She whispered the names in her head. They had all died valiantly. Honourably, she told herself.

Yet they had died all the same. Died, because she hadn’t been good enough.

She began her morning routine, her face a mask of serene grace. 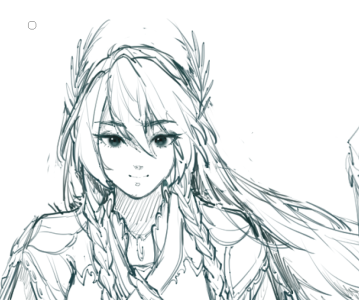 I wonder who this pretty lady is...