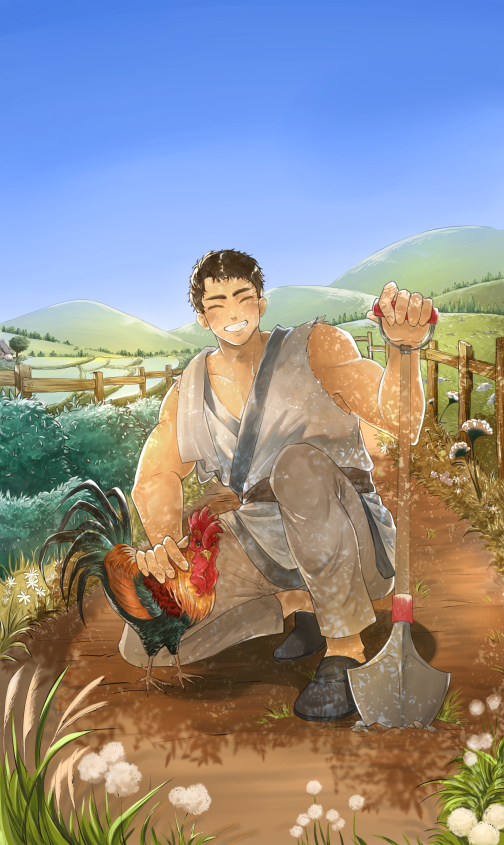 Kintsugi: to repair something broken with gold.

At first, there was bare existence. A mass of conflicting feelings and instinctual reactions. Thought, without thought. Feeling without feeling.

It was a crippled, broken thing. Torn open and sundered in ages past. It slept fitfully, and it hurt.

That was the way it had always been. Torment and nothingness, for a thousand, thousand cycles. So long, it had forgotten. But the pain. The pain it remembered. The sharpness of it had faded, but it still remained-- that dull, dull ache.

The cycles continued as they always did. The occasional tremor here, the odd pulse there. Places far, far away from it.

It was. And yet it wasn’t. And that was fine with it. It was so easy, not to be.

One cycle, there was a feeling. A feeling it remembered. A bare tendril of heat. It was practically nothing. But... it was familiar. It reached deep, deep down, and touched a crack, from a wound millennia old.

It expected pain. The ripping tearing sensation. Like a beaten dog, it cringed and cowered, trying to escape from the agony that was sure to come. Yet it could not move. All it could do was endure.

The warmth touched the jagged edge. It lay upon the massive wound...and left itself there.

There was no pain.

It was warm and comforting, in the sea of pain.

Ten cycles became twenty. Twenty became thirty. And the wound...started to stop hurting. Its last piece of what could only charitably called “self” pulled itself out of the diffuse chaos, and mire of grinding pain. It reached blindly for the light, grasping eagerly, desperately for the one that was healing it’s wounds.

Tendrils of its own power reached, swiping clumsily for the healing light. For several cycles, it tried to grasp the other. Until it finally succeeded. One tendril met another.

And, as it finally brushed against the tendril, connected.

It cringed again, but could not pull away. It shrieked and whimpered, pulling and tugging at the line, and trying to sever this unwelcome hold that led directly to it.

But still no pain came. Instead.. There were feelings. Feelings beyond pain. Happiness, contentment, care, respect. There was hurt too. A feeling of profound loss, but determination to continue.

It stopped trying to free itself, and observed.

The Connected One toiled every day, healing its wounds, and disregarding the connection. He gave and gave. He did not force the plants to grow beyond their abilities. He expected nothing, beyond their nourishment later.

There was no tearing. No feeling of being drained into a husk.

Tentatively, it gave back. A tiny, pitiful amount. The Connected One spent the energy, and returned it.

The pain slowly, ever so slowly dulled. He gave everything he had, without reservation. A thought connected them.

Let's take care of each other, okay?

There was no acrid tang. No slimy...words, intentions? Nothing that demanded its power.

For the first time in millenia, the shattered remains of something once greater thought. It was lesser than even the least animal… but it chose.

And so the cycles continued. They started taking breaths together. They breathed in and out in time with each other. One inhaling, one exhaling. It was a wondrous connection. It was learning. It was feeling. It was knowing other than pain.

How the rice grew. How “nutrients” affect the soil. How things connected in a way it could somehow understand, despite never hearing of such things before.

They worked as one. Toiling, and aiding each other. Growing, and healing together. It consumed so much of the Connected One’s attention.

The pain continued to lessen, as they worked. They spent all their time together, holding, nurturing, growing.

Until one day, they were attacked. Attacked by a wicked, vile thing, that sought to hurt them while they were still weak, still injured.

Their connection was saturated with all the pitiful dregs of power they had in that area. Some leaked, it was inevitable, but they needed it now. To give their all, for each other.

They were still mustering their strength, reaching out over it’s length and breadth to bring in more, when the enemy was cast down, and defeated. The feeling of violence faded, and their power relaxed once more.

They redoubled their efforts on healing the wound.

And so their cycle continued. Breathe together. Sleep together. Work together. Bit by bit, the wound closed. Bit by bit, more and more old pieces gathered towards the healing wound.

Another began to offer his strength. It was base energy, with no healing light. This one knew not why he offered it, only that he was supposed to. Hesitantly, they accepted it.

But it did not trust it. It felt.. Like some of the others. The ones that hurt. It carefully examined the power, and consumed it.

The next cycle, the other offered again.

The energy was examined intently… and accepted.

And so the cycles continued. Day turned to night turned to day like it always had.

The time for slumber was coming upon them. They hoarded their harvest for the winter, like all the little ones did, hiding their seed, and some of their power.

For the first time since it could remember, they were actively preparing for the great sleep. Organising their energy. Directing threads of power. Looking at old, old pathways, nearly gone from the world.

The other reached his power out and--

It recoiled. It was vindicated in its distrust. The other dared to offer them tainted energy, the energy that hurt it! It fled from the other, and rejected it’s touch. It fled deep, and dispersed, ready for another bout of pain.

It was filthy, it was unclean! It would hurt it!

And sure enough, some tainted energy was driven into it, a packet of soul thought and fouled intent.

But even this did not hurt. It felt strange, but not painful.

How odd. How curious. The connected one was truly mysterious, to make it so even this did not hurt.

It surrounded the little ball of Qi, stopping most of its hungry growth. It was partially suppressed, and stored to be examined later.

The preparations for the sleep continued. The other continued to seek them out, and offer tainted energy. It ignored it while prodding at the trees that were supposed to produce sugar. They were supposed to be sweeter than this! the trees upon it were good and evident, so they listened, and prepared with it.

Yet cycle by cycle, the impurities lessened. It learned of his remorse.

It was sleepy. So sleepy.

The other offered his energy, one last time before it fell asleep. It was still a bit nasty, but…

It sighed, and took it.

It was a bitter medicine, the energy that they ate. Full of regret and remorse.

But it didn’t hurt.

Slowly, the blackness encroached upon it. The howling dark rising up to claim it’s mind.

It slumbered, under the blanket of cold. It slumbered in peace for the first time it could remember. The night terrors were kept at bay by the Chunky one, and the Connected One. No grasping hands, and consuming maws bothered its sleep.

It felt warm instead of tearing pain and killing cold. The energy did not leak from their wounds. Or, at least, not from this wound.

It dreamed. It dreamed of other places, of the two lives lived by the Connected One. The two parts bickered, but were so similar to each other it was amusing how little they got along.

It flinched once, during its slumber, when the connected one strengthened their bond further, and accidentally crushed the odd little packet of Qi.

Shattered, broken fragments pulled together. Forging themselves anew. A tiny spark. A bare portion of what it was. But it was here.

Cracked and broken. Torn and worn. Small, and nearly defenceless.

“She” sounded right. The Connected one and Chunky seemed to think she was a she.

So that was what she was.

She slept, protected. The cold blanket melted, and still she slept.

She dreamed. Dreamed about who she was.

She was Big Little Sister, like Chunky said! Or… Tianlan Shan, like those other ones said? That one sounded right too... Or was she Fa Ram? Or was she “Mother Earth?”

She didn’t know, but that was okay!

She could feel the others. The joy. The laughter. The affection.The love.

Jin and Meiling held out their hands.

How could she refuse them?

She was still so tired. She was still hurting, in a thousand places. But right here, right now… She couldn’t help but be excited.

She was here. She was awake.

Tendrils reached out, brushing along her home, and the scabbed-over wound.

Oh? Oh? This place… this place!

She raced through the trees, the grass, the water and the breeze. She brushed against the streams of energy that made up her, and her dear, dear ones, entwined together in twisting and beautiful knots.

She looked upon what was hers. What was theirs.

Oh, oh this was going to be so much fun!

Wow, what a run, huh? I was really surprised this got as popular as it did, but I'm happy so many people are enjoying my story.

Unfortunately, this is not yet the official start to Volume 2, but a sidestory that I thought would fit.

Secondly, is the update schedule. I screwed up massively, and did the rookie mistake of "oh, these things won't take that long, will they?" The answer is yes. Yes, editing, and all the meetings and all the planning takes much longer than I thought.

So we're going to start a bit slow and then ramp up. For the first couple of weeks, its going to be Monday, Tuesday Wednesday, Friday, which will transition to Monday to Friday as I fix things, edit things, build up a proper backlog, and all those wonderful things one must do to avoid burnout.

We do have one advanced chapter on the Patreon, available to the chick tier and above, but it will only be on day in advance this week, which will be the official start to Volume 2.

Thank you for your consideration.