Chapter 45: Statues and a House

There was less rocking than Xian expected. They were travelling forwards at a terrifying pace, the wind in his hair… and yet the cart was nearly completely stable. Not a single piece of glass rattled against another, as Jin’s stride utterly consumed the ground in front of him.

If there was one thing Xian never thought would happen, it was to be carted around by a cultivator. But ever since Jin came, the improbable seemed to become rather more likely to happen.

He had traveled this fast only once before, under decidedly more dire circumstances, in a vastly more uncomfortable ride. There had been horses screaming, soldiers shouting, and arrows thunking into wood.

Instead of a freckly maid shouting obscenities, an Archivist screaming in a much higher pitch than said maid, and himself praying to whatever gods would listen, Brother Che was looking mostly bored, while Yun and Gou argued about what meat tasted the best. Jin occasionally interjected over his shoulder.

“Chicken?! But it tastes so bland!” Gou Ren scoffed.

“Bland?! It has a lovely subtle flavour! And it takes seasonings so well!” Jin shot back. “And fried-- fried chicken is the ultimate dish!”

“All of you youngsters are wrong! Pork is best!” Brother Che derided them. “Sausage and dumplings are all a man needs to grow big and strong!” He flexed his muscles, bulging from a lifetime at the forge. Both the Xong brothers went quiet at the declaration but glared mutinously. Jin just laughed. Even into his forties, Che’s muscles rivaled Jin’s in size--and Che wasn’t a cultivator.

Xian liked deer himself. Both his late wife and daughter made excellent roast venison. He absently watched the passing trees, remembering the speeding carriage. There was also a lack of urgency. No evidence needed to get to the court the next day, else their heads would roll.

Court intrigue was hazardous to one’s health. Doubly so when you got involved by accident.

He shook his head, to rid himself of the memories. Even the years couldn’t make him think fondly on those terrifying days, though the times that came after more than made up for them.

The journey to Jin’s house, that was nearly the same distance away from their village as it was from Verdant Hill, took mere hours. And Jin wasn’t even winded. He looked a little nervous, shooting glances repeatedly at Xian, but it was understandable. What man isn’t nervous about showing his future father in law his home?

The gate to his land was large and sturdy, with a maple leaf, and the amusing “Beware of Chicken” sign displayed prominently. The Xong Brothers and his own daughter had been amused greatly by it.

And there too, was the aforementioned chicken. He had seen it before at his village, briefly, shrouded in the dusk on the rooftop.

In the bright light of the day, his true colouration was revealed. His plumage was more vibrant than any painting he had seen, including in the Palace of the Pale Moon Lake City. His red neck and breast looked like fire captured in plumage. The blues, like the most perfect of sapphires. The green on his tail, jade. His talons and spurs shone like silvery metal, and his comb was a deeper red than what the noble ladies wore on their lips. The fox-fur vest he wore paled in comparison to his magnificence.

The Rooster’s gaze was stern, but not judgmental. A proud guardian. The Rooster bowed to them, as Jin and the cart passed the threshold, welcoming them into Jin’s “Fa Ram”.

The Xong brothers bowed back, as much as they could sitting down. Che started to bow, and then his eyes caught on something else.

“We didn’t tell you about the General that Commands the Winter?” Yun Ren asked cheekily.

Xian started laughing. Meiling had told him, but it was one thing to hear about the massive golem made out of snow, and another to see it. It was a jaunty looking fellow, with a dumb grin, and a giant hat colured black with ashes. It was an amusing sight.

Jin continued his walk, bypassing a small shack, and continuing down the hill to a small river. Though he did slow down as they approached the river, until Jin stopped, his mouth open in shock, and a bright blush forming all over his freckled cheeks.

“Tigu’er...” What came out of Jin’s mouth was almost a whine. Gou Ren and Yun Ren burst out laughing, and Che sounded like he was choking on something. Xian turned from “The General” and looked forward.

There was a little cat, still a kitten really, sitting in between a bunch of ice sculptures, and looking like it had just managed to slay a thousand mice. It bowed to Jin.

A bunch of ice sculptures that depicted Jin, nude, in various martial poses. Trampling on a giant rat. Staring boldly forwards, his hands on his hips. One that even had him in a one handed hand-stand, flipping over a boar.

Xian was honestly impressed by that one. How had the spirit beast managed to balance it? And the detail was incredibly fine. A bit amateurish, compared to the sculptures he had seen in the Palace, and some of the anatomy was questionable. But honestly impressive, considering they were made by a cat.

“These… these are very nice, Tigu’er….” Jin managed to get out, and the kitten preened at the praise, rubbing up against Jin’s legs. “But… how about you... diversify your sculptures. It’ll make you better, to have other things to practise.”

The kitten considered, and then nodded. She hopped up onto his shoulders, and lay atop his head. The Xong brothers were gasping for air, and Che had begun crying. The kitten glared at them.

“I’m sure they’re just overcome with emotion at your beautiful sculptures.” Jin said, his eye twitching, and his face crimson. “Now, how about I put these in the ice room, so they don’t melt?”

The kitten slid its way into the front of his shirt, and yowled happily.

“Is the weapon accurate?” Che managed to choke out, tears streaming from his eyes. He pointed at the sculpture’s… bits. One of the parts that Xian had a feeling was not correct.

The kitten looked confused by the question, looking to where Che was pointing, and then to the actual sword that sculpture was holding. It nodded its head..

Jin’s face screwed up, and actual steam started to billow off the mortified boy’s shoulders. Che howled, doubling over. “Looks like Meimei is going to have her work cut out for her!” Gou Ren, caught in his mirth, leaned back so far he fell out of the cart, falling onto his back and continuing to gasp for breath.

For a moment, Xian was worried that even Jin’s patience would have limits, especially with such a topic. Jin was clearly embarrassed... But he seemed to find the whole thing at least a little funny.

“Well, make yourselves at home--I gotta-- yeah.” Jin managed, sighing at the sculptures. He quickly, but carefully collected the sculptures, and began carting them off.

Xian took a good look at the front of the house. The style was unfamiliar to him. Yun Ren had originally said that the house was bigger than his own, and he had been impressed. His home was the largest in Hong Yaowu, though a good portion of it was storage for the medicine his family created. The actual livable section was a bit more modest, but it was no hovel.

This, however, was a veritable manor. There were more foundations roughly marked with stakes outside. The other completed buildings were an outhouse, what Xian assumed to be a bathhouse, and a large stone oven. It was not a walled compound. Instead, there was what looked like a veranda surrounding the entire house, with the tiled roof extending past the outer walls.

They bundled the glass into the house, the rest of their party having stopped laughing for long enough to do some work. They were greeted at the door by Pi Pa, the sow brightening up and bowing politely when she saw Xian. The entrance was on a slightly lower level than the rest of the house, and covered with easy to clean slabs of stone. The Xong brothers took off their wet shoes at the entrance, and he did the same, stepping onto the lacquered and waxed hardwood floors.

They were so smooth they were almost slippery. He shuffled his feet, and not a single splinter threatened his socks. They were also a lot warmer than Xian was expecting. Gou Ren was allowed to set down his load… and then he was promptly bowled over by Chun Ke, the boar excitedly nosing him.

Xian took the opportunity to look around the house. The main room was warm and inviting, with a divider and a bed, as well as a warm hearth. There were several large cushions around the fire, and a table that had what looked like a blanket under its top, to warm the legs of those who sat under it.

Xian would have to steal the idea. It looked comfortable. There were several half- finished projects as well. What looked like some gears from a water wheel, each of them with a different number of teeth, and one that had been snapped in half. Strange looking stone that seemed to be almost poured into its shape; A box, filled with empty frames that could be slid in and out.

If this was the entirety of the house, Xian would have been satisfied. But there was also a large kitchen, another storage room, and an entire second floor-- as well as the famous “river room” complete with gluttonous carp. It eyed them excitedly as they entered… and then realised that they didn’t have any food. It made a noise that sounded suspiciously like “feh!” and went back to sleep.

Yao Che nodded, as he looked around the house. “Well, I certainly approve. It will be a lot of work, but I see no reason why we can’t get this done by the time the snows melt. A week or two to finish? Jin is cutting it close.”

“A week or two? Jin’s voice called, as he entered, “I was thinking a day or two. Less if we hustle. All the flooring is cut, it just needs to be put in. And we should be able to get through all the windows today.”

Yao Che raised an eyebrow, and then seemed to remember he was dealing with a cultivator.

“Well, if you say so. I want to see this when it’s finished! Xong brats! Get to work!” 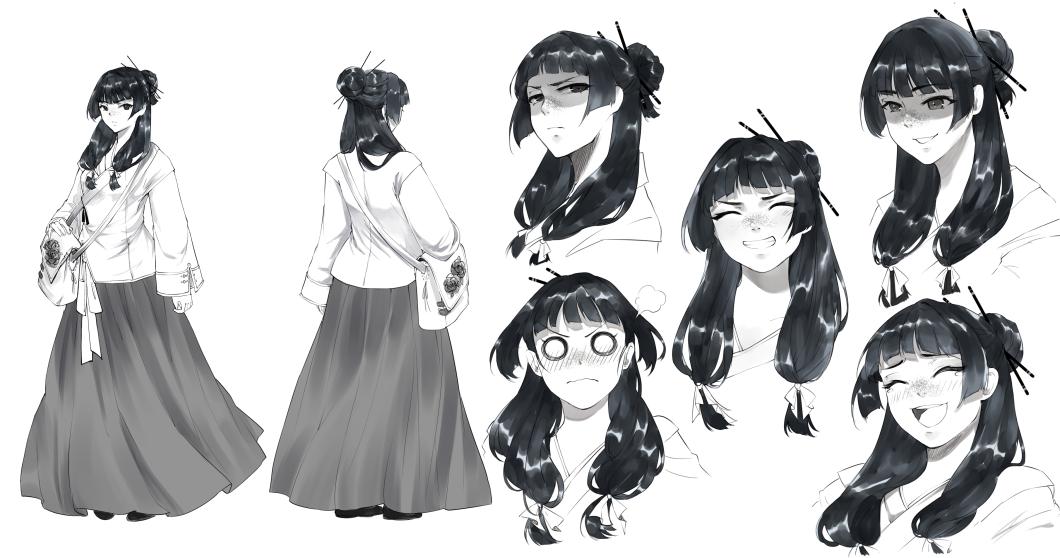 Art is again by Tsurot