Thanks for being understanding about my short break/ Going forwards, I will be taking one day off a week, and that day will be THURSDAY.

It was that odd moment, at the end of the year, and the beginning of another. There was always so much stuff crammed into these months, and then, all of a sudden, there was a drought of events until the spring. The kind of lull in the world, as most people just seemed to be waiting for spring.

The New Year was a time for reflection, and reflecting on my choices over the year, I can safely say that I didn’t regret a single one. Especially not the decision to leave the Sect. Hell, transport me back in time, and I’ll do it all over again.

Things had been good to me here. Especially, so far, the people. And the things we did together.

I had always been a fan of festivals, even if they were mostly overpriced crap they were back before. Wandering around with a pack of friends, shooting the shit, and having a good time? Sign me up. And while the Solstice was held in the village, as many people as could be spared went to Verdant Hill for the New Year. While Hong Yaowu could certainly put on a party, it was nothing compared to what had happened at Verdant Hill.

You know, I never really liked New Years Celebrations before I had gone to one here. The ones back before had been so boring to me. Sit around and watch the ball drop. Normally at home, because it was so goddamn cold. Sure, there were some parties and stuff, but it never really felt like as much of an event as the Lunar New Year was.

Or maybe I just hadn’t gone to the right parties. I certainly liked the Lunar New Year more than anything I had done.

Most of our time was spent in a buzzed haze, or eating something. Elder Xian eventually got so sloshed that he started singing the same song about the whore that Meiling did, his arm wrapped around Bao’s shoulders. Meimei had left out of embarrassment, dragging me along with her, as the town got increasingly rowdy.

We had visited Tingfeng and Meihua, the latter of whom was starting to show pregnancy. It would still be a couple of months. She was due in the spring.

I had also finalized some deals, and checked on the progress of some glass merchants. The house needed proper windows. I currently didn’t have any, as I was too worried about heat loss in the new house, and I opened the door if I wanted to air everything out.

Now though, with spring on the way, and the days already starting to get a bit warmer after the Lunar New Year, it was time to complete everything, along with the rest of the tasks I had set myself to do this winter.

There was paradoxically less, and more work in the winter. It was a bit surreal to be teaching this stuff to animals, but they took to it rather well. There were the standard repairs, and feeding the animals, but without anything to grow, and tend to besides the Spirit Herbs. But what there was a lack of in labour, there was a massive increase in planning, now that I actually had some time.

Fields needed to be plotted, seed considered, and logistics codified. It was a lot of work deciding everything. I had been keeping track of my food consumption, and that of my disciples, to see how much I could sell the next year, and roughly how much I could grow. As well as thinking of things that I would need in the future.

It was boring work, for all that I had gone to a proper school in the before, and logistics never got any easier. It was stressful, especially now that I was guaranteed to have another mouth to feed in Meiling. I never wanted her to go hungry.

And If I wasn’t constantly reviewing my numbers, I was working on other things.

Like making good on my promise to my disciples.

“Now, thats all the questions. Everybody ready?” Bi De’s Great Master stood before them at the head of the room, his arms behind his back. They had received a test, not of the body, but of the mind this day. Bi De would endeavour to do his best. They all would.

His Great Master had spoken true: He had an enormous amount of things to teach them. From reading the characters that conveyed knowledge, to “math” and “science”. It was all, according to the Master, basic.

But it was difficult. The Great Master was a calm, and patient teacher. He would explain it as many times as was needed. Though they still had difficulty communicating without Sister Ri Zu, he could tell if they were confused or not understanding of the material.

Unfortunately, there was a great lack of understanding on Brother Chun Ke’s part. It was vexing that he lagged behind so greatly, but Bi De spoke not a word of rebuke to his brother. His head wound still caused him difficulty some days, and thus he was slower in learning. His boundless energy coursed through his body, and when forced to sit for long periods, he began to fidget.

His self control was lacking, but if he had not been rebuked by the Master, how was it his place to do the same? They cultivated different styles. Brother Chun Ke required much exercise and play to reach his potential, and seemed to gain limited value from meditating. Not that his style allowed him to sit still for long. It was so overwhelming for Chun Ke at times that the Master had to send him outside to run laps before coming back in.

Bi De put it out of his mind, and focused on the numbers he had been given. Something, deep in his soul, told him that the characters he was using were wrong. The one was supposed to be a line that was horizontal with the ground, wasn’t it? This one was straight up and down. And the two, two lines, and not this strange, swooping shape? He didn’t know how he knew this, but it was a simple thought in the back of his head.

He ignored it. This was the Great Master’s profound wisdom. It was naturally superior to any gut instinct he could have, because it came directly from him.

Though that same gut instinct did seem to concede that this was an easier way to do the problems he had been given, especially when arranged in one of the Math Formations he had been gifted.

The piece of chalk was held in his beak as he swiftly completed the problems set before him. While his slate was small, Brother Chun Ke had an entire slab of stone in order to practise, and a large brush. While Sister Pi Pa had the fine dexterity that she would be able to have a small slate, she too had been given a larger one, so that Brother Chun Ke was not left out.

There was a splash, and Wa Shi slapped his fins on the water, looking smug. This new trough allowed him a great amount of maneuverability, and allowed him to partake of the lesson as well. At first, the fish had cared little for the Great Master’s teachings, content with his lot in life. The Great Master had said he would give him a small parcel of food for every correct answer.

Now, Wa Shi was his most dedicated and skilled student. The Master nodded at the fish, and went to look over the answers to his questions. Bi De redoubled his efforts.

In the end, it was a perfect score.

The next to finish was Sister Tigu, who got but a single question wrong. Though he assumed that this might have been on purpose. She was picked up, and placed in the Master’s lap, so that they could review what she had done wrong. A mere miscarrying of a number, something easily fixed. But she remained in her place, purring contentedly after she was done.

Finally, it was time for Chun Ke and Pi Pa. The Boar was nervous, shuffling his trotters, while Sister Pi Pa was calm, waiting for judgment.

The Master gazed upon them, his face pulled into a slight frown.

“Pi Pa, you got the same answers wrong as Chun Ke.” He stated, and the sow raised her head primly. The Master’s gaze held no recrimination.

“It's fine to be loyal, Pi Pa, but harming yourself, and holding yourself back serves no place here. Everybody learns at their own pace, and I’ll spend as much time as I need to with him.”

Pi Pa frowned, and looked at the floor, embarrassed that her plot had been discovered. “Now, I’m going to ask that you do this again, while I go over things with Chun Ke. I know you can do better than this.”

The Master then sat with his slowest disciple, affectionately rubbing the top of his head.

“Alright, you did a good job here. You tried. I can see that you were showing your work, which is good, it helps us to figure out where you went wrong…”

Bi De followed his Master, and sat down beside him, to better see how he was making corrections.

As The Great Master had once said:

‘Sometimes we learn more from failure than success.’

He would endeavour to put this saying into practise. 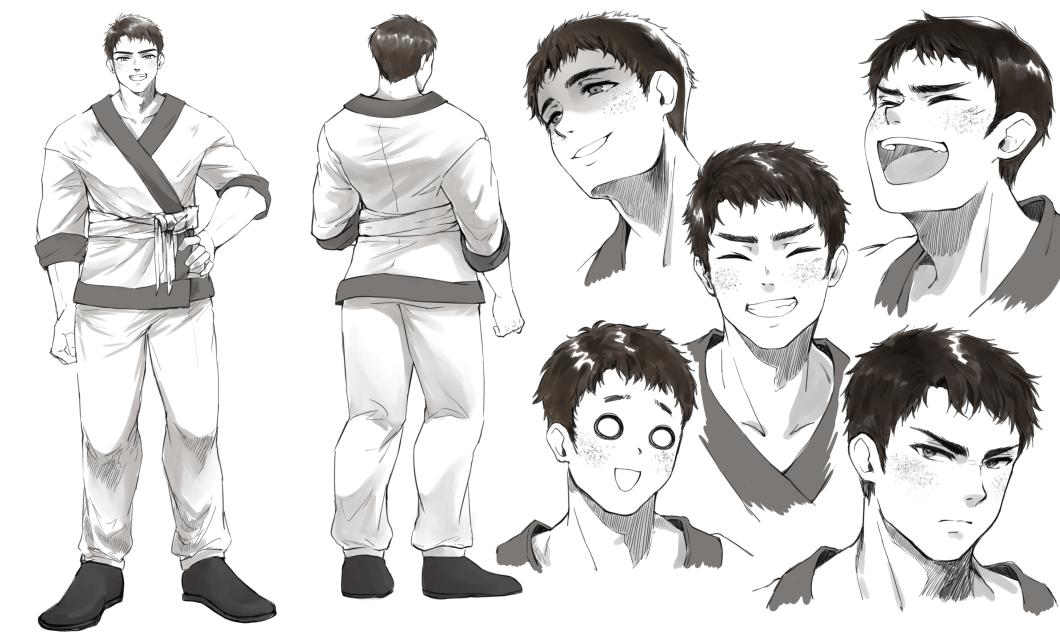 And a render and expression guide for Jin. Artist is Tsurot again.