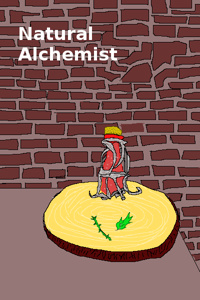 Jocelyn sat hunched over her desk and wrote by the light of a single candle. It was already far past when most people would be asleep, but she was still wide awake and had no desire to go to sleep any time soon. The reactions during her latest test of the potion still hadn’t finished, and there was no way she was going to be able to sleep before knowing for sure. It was a much slower, more comprehensive examination to make tripply certain that the potion truly didn’t contain any dregs whatsoever. Both the first and second test had shown that it hadn’t, but despite that she still couldn’t quite believe it. It flew in the face of all that she knew about alchemy. But if this test came back negative too… She shook her head. There was nothing she could do but wait. Worrying wasn’t going to change the results. Either the young man’s potion was revolutionary beyond anything she’d ever even heard of, or she’d made a mistake in her earlier testing. Possibly a combination of both. The young man had come back a few hours ago with nothing but a single small sack on his back. The sight had left Jocelyn stunned. Was that truly all the poor man owned? What about clothes? Tools? Furniture? Alice really had hit the mark perfectly when she’d said she thought he was in financial trouble. No wonder he would take such a gamble on a mysterious potion from a beggar…

Unfortunately that fact didn’t help answer any of Jocelyn’s questions as to where the hell the potion had come from. She hadn't ever heard of anyone capable of making a potion like this. Certainly not her, and not any of the seven Grandmasters. Not even the Great Master herself could make something like this. It broke all previous knowledge they had. If it was reproducible it was a new and strictly better way of practicing alchemy. And it had somehow gotten into the hands of a beggar, who had sold it to a young labourer for a pittance. And that young man seemed to be full of riddles himself. She smiled a happy smile lit by candlelight. Not only was this situation full of uncertainty and questions, she even got the potion of a lifetime as a bonus. She wanted to giddily just jump into research, but reason held her back. This was too big. She needed to tread carefully.

A soft knock at the bookcase on her left caught her attention. She promptly put the quill down and walked over to pull on one of the books until she heard a soft click. The case swung open revealing a man holding a small covered lantern.

Brick was a tall and skinny man, dressed in his usual vest and fashionable black trousers. He lifted off his hat with one hand and performed an elegant bow which was somehow not at all diminished in appearance by the thief's lantern he held in the other.

“A slight complication with a cutpurse down by the docks. It’s taken care off; you don’t need to worry.” Brick said.

“To business then.” Brick said. “As you wish. That man Will truly did work at the harbor loading docks for over a year. He only quit this morning out of the blue. That’s apparently not at all uncommon though, workers quitting suddenly like that. After that he went and found a cheap inn, but didn’t stay in the room for more than a few minutes. I wasn’t able to find where he went next as he left the harbour area, but later he was at The Blue Rose spa.”

“Why would a penniless man go there?” Jocelyn said with a raised eyebrow. Even she had heard of The Blue Rose. It was one of the highest class establishments in the whole of the central district. It wasn’t very expensive to someone like her but for a man like Will it was a luxury he shouldn’t be able to afford.

“I don’t know.” Brick shrugged. “But he bought the cheapest option they had and left rather quickly. Spent no more than a single silver coin.”

“And what of the beggar?” Jocelyn's gaze turned focused. This was the most important bit.

“Nothing, like I told you.” Brick said. “There is simply no way to find a single specific beggar in the harbor district when all we have is that he sold things two weeks ago. I heard of over a hundred old men fitting that description in just one afternoon, and I have no way short of interrogating them personally to find out which one it was.”

“Like I said. It’s impossible with the information we have.” Brick said.

Jocelyn tapped her finger to her chin as she thought. After a moment she shook her head and sighed. She walked back into the room and took a small purse out of a drawer on her desk. She tossed it to Brick who caught it with his free hand. A wide grin revealing white teeth split his face.

“Always a pleasure doing business with you, Maestra Jocelyn.” he said.

“If you hear anything, let me know right away.” Jocelyn said. “I would also like you to keep your ear to the ground for any legitimate sounding rumours of special or spectacular potions.”

“Happy to be of service.” Brick said. “If I find anything, I’ll rush to tell you straight away.” He clapped a hand to his chest in a mocked salute. But his mouth was still grinning widely.

“Off with you. It’s late, and you’re interrupting my work.” Jocelyn frowned at the man. Brick laughed and held up his hands as he began to back away. He turned and began to walk back the way he’d come, humming a soft tune and tossing the purse in his hand as he did so. Jocelyn stared after him a moment until the clink of coins grew silent before shutting the bookcase with a small sigh. Too much had happened today, and she couldn’t deal with Brick the way she normally did. She shook her head and returned to her desk. Her eyes got drawn to the small vial to her left, and she couldn’t help but smile. The color of the liquid inside had changed from a dark brown to a blackish silver, and the bubbling had stopped, which meant the reaction was complete. She hurriedly walked over and carefully took out a piece of cloth coated in a thin grey wax, and strained the liquid in the vial through it into a second container. Once all the liquid had passed through she folded it in on itself before quickly putting the container away. With shaking hands she carefully put the cloth down atop the table underneath her microscope, and carefully folded it open to look inside.

She had been half expecting it, but what she saw still shook her to the core. Or rather, it was what she didn’t see. The cloth was clean. There wasn’t even the tiniest smudge or discoloration caused by dregs whatsoever. Jocelyn leaned back in her chair and took a deep breath. It was the same result as the other two tests. But this time was different. The previous tests were quicker, and were generally considered ‘good enough’, but they had a relatively large margin of error. If the potion was good enough, the dregs it had could be so low that they wouldn’t show up on those tests. This one was different. It was much more thorough, and much trickier to complete successfully. Jocelyn had to very carefully guide the mixture together with her Sense during the initial blending. A single mistake would have made her have to start all over again, having completely ruined that amount of potion forever. But she’d succeeded, and the results were crystal clear. The potion didn’t contain any dregs whatsoever. It had actually reached the mythical state of Perfection.

Despite her large amount of experience Jocelyn found herself completely clueless as to what to do next. It was completely unfamiliar territory not just to her, but to alchemy as a whole. It wouldn’t be exaggerating to call this the biggest discovery since the first successfully made talisman some 150 years ago. Perhaps even bigger than that. She smiled as she sat, lost in thoughts that spun and possibilities that were seemingly endless. Today had been a day that heralded change. And to think it had all started with a single purchase made in desperation by a man down on his luck. A pure coincidence. If Will hadn’t needed money so badly, or that beggar had picked a different corner to sit at that day, this potion would probably never have been discovered. She couldn’t imagine anyone other than Will ever buying that potion. The only other option would be an actual trained alchemist, but she just couldn’t see them casually walking up to a beggar in the harbor district. No, it could only have been Will... a man down in his luck and desperate for any chance he could get who also for some reason had the Sense. That or the alchemist that gave it to the beggar in the first place.

Right then Jocelyn realized something. She had been thinking about this too casually. Acting too timidly. Just asking Brick to investigate wasn’t nearly enough. This was much too important. Cost whatever it may, she needed to learn where that potion had come from. Who had made it, specifically. That alchemist held the answer to the most important question in the field, and she couldn’t let Brick saying it was impossible stop her from doing absolutely everything she could to get that answer. She rose and walked over to grab a stack of fresh paper from a shelf, then licked the tip of her pen and started to write a new letter to Brick. The future was looking more and more tumultuous by the second. And she’d be at the center of it all. She couldn’t wait to learn what other mysteries would reveal themselves in the near future. Hastily she signed the bottom of the paper, before moving on to the next one. And then a third. The fourth and final one she wrote more slowly, and carefully considered each word. The other letters were to characters with similar personalities and standing to Brick; she could be hasty with those. But this one was different. She had to be more careful with what she wrote, or the stubborn fool would never see her.

‘Honored Grandmaster,’ she wrote. ‘I am writing to you seeking an audience post haste, as I have something to say that is much too important to write down on paper. It is vital that I see you as soon as possible, so I’m calling in my favor. Please set a meeting as soon as you are able.

Looking forward to seeing you soon.