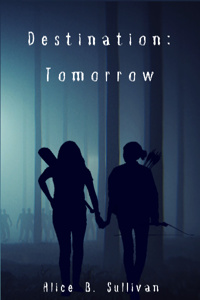 [Complete at 10.8k words] Sara has her own rules during the apocalypse: keep moving, stay quiet, and keep to yourself. When she meets Katina, those rules go out the window.

While Sara tries to suppress her budding feelings for this strange, new girl—because who has time for romance when the dead rise?—the two must fend off savages and the infected if they want to survive to see tomorrow.

by David Musk Wednesday, January 27, 2021 10:36:03 PM
I’ve never read a romance/zombie apocalypse before story now, but I like the concept! There is something cozy about finding love in a destroyed world.
The first chapter starts out strong. The author does a good job of throwing you straight into the action and saving the world-building for the second chapter. Too many authors on this site make the mistake of doing the opposite, spoon-feeding the reader with all the world-building, character motivations, and backstories too early before we’re properly invested in the moment. I was glad to see that didn’t happen, especially when this is a short story where every word matters.
Style
Style was probably the book’s strong suit. From the very beginning, the writing has a sense of immediacy and a strong narrative voice that puts you in the character’s skin. Most of the sentences flow well, and there are plenty of colorful metaphors sprinkled in that lend the prose more color.
And like I said above, the info-dumps are kept to a minimum and I rarely had any moments where I felt tempted to skim.
Characters:
The main character, Sara, is likable. I liked her feistiness, dialog, and pragmatic approach. She talks about being a lone wolf, but then her willingness to help other characters shows some subtle contradictions and depth to that philosophy, and this makes her more three-dimensional. She continues to have this inner-conflict throughout the beginning chapters, which made her outer-struggles more engaging.
The antagonists, by contrast, felt slightly cartoonish to me. They drive around making noise with assault rifles (which the narrator states is a bad idea) followed by one mistake after another. These are the type of villains who end up monologuing while the MC escapes, or creating conflict for the sake of the plot. One example is releasing a prisoner they’d already captured, just so they can hunt her down again. They also destroy another character’s weapon (during an apocalypse, that seems like the modern-day equivalent of burning money.)
The bad guys’ main motivation seems to be "excitement", but is excitement really so hard to come by during a zombie apocalypse? They also like watching people suffer, apparently, which adds to the mustache-twirling aspect in my opinion. Sure, lots of grimdark books have psychotic characters like that, but I think that sort of villain is actually harder to pull off as opposed to more human motivations.
If these bad guys were more competent, I think that would make them seem more intimidating, and result in stronger conflict overall. I’d rather see the main characters succeed despite their enemy's competence, rather than taking advantage of all their mistakes.
Grammar
Really, no complaints here either! I haven’t noticed a single error.
Plot
Like I said before, I can get on board with the MC’s character arc and romance, but the antagonists left a little to be desired. The fact that they act so incompetent and one-dimensional can make the plot as a whole seem less engaging, and the conflict more contrived. Although, I did read ahead on another site where the chapters were posted (up to Chapter 5) and things did get slightly clearer around that point.
Also, as a side-note, the main character seemed to be learning the theme, “The lone wolf dies, but the pack survives.” along with the idea of caring about someone besides herself. In light of this, It seemed ironic to me that her enemies are, in fact, working as a team. I wouldn’t call this a plot flaw so much as a lost opportunity. If we saw the antagonists bickering more and betraying each other (and the consequences of those actions) that could serve as a great antithesis for the theme the MC is learning.
Overall
Despite a few complaints, I did enjoy the style and the speed at which the main characters are introduced. That sort of thing is essential for a short story.
The romance is very light in the first few chapters (just hinted at, really) but I prefer romance on the subtle side anyway.
Overall, it’s an entertaining story. With a little bit of polish, it could be even better!
Report

Competent but lacking in surprise

A competently-written first chapter that gives us some action right from the start, which is always a good sign, but unfortunately lacks anything truly memorable. We’ve several decades deep into the zombie craze (I guess it’s more of a flavor than a craze by now), so in order for a zombie story to be distinguished from the competition, we need something really memorable in the first chapter. Or something odd, something slightly off, something unexpected, something that makes us realize the author is going to take us on a journey that’s different from what we’ve come to expect. The first chapter doesn’t do that.

But I definitely appreciate being thrown right into the middle of the action, rather than having a bunch of lore dumped on us! All writers should take note of that!