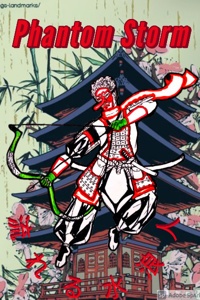 The moonlight refracted off of his tanned skin. It coursed through his piercingly bright hazel irises, down his well-designed nose and landed on his sharp jawline. Itsuki was a handsome child. Intertwining his fingers between the curly bundle of hair atop his head, he noticed how identical its colour was with the caliginous veil of darkness above. Essentially it is invisible at this time of day, He remarked with a grin plastered across his face. As Itsuki brushed the long, twirly hair blocking his line of sight away, he caught a whiff of a tantalizing aroma. The grin on his face grew even more. In terms of profit, the hunt yesterday had been lucrative, to the point that Itsuki had woken up believing that it was but an illusion. However, the taste of savoury meat residing in his mouth, the morsels of food he would remove from his sharp teeth every few hours, and the bump that had formed on his stomach confirmed otherwise. In the deepest parts of himself, there was a small pile of guilt and shame at the thought of having killed a living creature.

It gnawed at his heart ever so slightly. But whenever the thought of his promises and the sacrifice committed for him arose, it simply vanished. As if it was utterly irrelevant when compared to such things, and in his mind, it was. A horned rabbit life could never amount to those of his parents, no matter how many of them there were. Additionally, everything he had done was necessary for his survival. Reaching deep into his clustered bag, Itsuki removed a water bottle. The meal he had just wolfed down required a liquid to aid in his digestion. Who knew rabbit’s meat could be so tender and chewy? Itsuki had noticed the absence of flavour, along with a distinct rawness in the meat. He resolved himself to never underestimate the importance of salt ever again. While on the subject, he also promised to make a better fire and not kill as many rabbits the next time around.

Unfortunately, Itsuki had been unable to obtain everything he had eliminated. At the time, it had pained him greatly to see so much life and food being wasted. However, his small stature, weak muscles, and primitive preservation knowledge hadn’t given him many other options. In the end, he returned home with five out of the eight he’d eliminated. This was done in two back and forth trips. With a little more time, Itsuki might’ve been able to return all the rabbits to his branch of a home. However, nighttime had been gaining on him, and he wasn’t fully confident in his ability to fend off the monsters that appeared around that time.

Heaving a sigh at the prospect of the wasted nutrition, Itsuki raised his head to the moon. Its beauty was ethereal. His mind wandered off, and Itsuki found himself wondering where he was in this borderless galaxy. Maybe there were other planets full of life in this magical universe. Sometime’s when he was bored, he liked to imagine what his family on earth might’ve been like. Just maybe, with the smallest of changes, they still thought about him, or perhaps he didn’t have a family to call his own. The thought disturbed him a little, but he brushed it off and planned his next move. Itsuki made a quick rundown of his current supplies.

Inside his pre-crafted root cellar were the carcasses of five whole rabbits; there are only three remaining water bottles, and all his arrows and weapons need maintenance. Taking all of this into consideration, Itsuki came to a consensus. As early as tomorrow morning, he would begin heading back home. With this, he could restock his water once at the lake bordering their home, and there would also be a chance to retrieve extra resources and clothing. ‘The house is about a half day’s walk from here. I should be able to refill before my supplies run out with my current rate of consumption.’ Analyzed Itsuki.

Itsuki downed the last drops of his third water bottle, stared at the moon a little longer, and eventually headed to bed. A makeshift blanket crafted of fabric rested atop his frail body, silently repelling the chilly air brought upon by night. With his trusty backpack acting as a pillow -Albeit lacking the comfortable and sinking qualities of an ordinary pillow- Itsuki fell asleep. His first relatively peaceful sleep in days. The howling of dire wolves and chirping of insects Chronologically jolted him awake during the night. However, Itsuki braved through it, and morning arrived shortly after.

Slowly at first, then faster. The sun rose above the mountains, illuminating the shrubbery and open plains along the way. With it came morning. And morning stirred Itsuki, its freshness returning him to the land of the conscious. Sluggishly, he raised both arms and rubbed his golden eye’s in an attempt to shake off his atrocious insomnia. During this, Itsuki reminisced of his latest bizarre dream. Savage silhouettes prowling around his body, the thick stench of blood permeating the air and their lifeless expressions as they breathed their last. Over and over, it repeated like a broken record. Every day since their deaths, this dream haunted him at night. Itsuki took deep, soft breaths as his chest bobbed up and down. A rose tinge stained his cheeks, a testament to the effort it took to return to a calm state. Moments passed as he inhaled a modest meal, equipped the wooden bow to his right, and packed his bag. Everything was ready. Itsuki wrapped his arms around the tree branch and took a swift leap. Landing directly on a patch of grass, he took off running.

The weight of Itsuki’s backpack bounced about, in the air at one moment and smashing into his back the other. Gliding past branches and nearly missing trees, he travelled like the wind, free and intangible. His speed and size played a big part in this seamless transition from one branch to another. The forest behaved like Itsuki’s playground. As he travelled, he snuck a few glances at the landscape encompassing him. Large birds and small birds alike flew around, crisscrossing through the sky, seemingly a playground of their own. Below his feet, the grinding of sharp incisors reverberated through the forest. Mole-like creatures bore through the ground, unceasingly expanding their subterranean kingdom. They would occasionally surface and get a whiff of oxygen before returning to their mindless digging. Above the mole’s heads resided even odder creatures, gnarly lizards with spikes on their backs, emerald tinted bipedal turkeys as tall as a man, lions with skin made of bark and snakes with front arms. The sight of these terrifying monsters caused Itsuki to have shivers run down his spine. On second thought, the exploration of this expansive forest could wait. At least, for a little while.

Along the way, he opted to check the system. ‘System’ Itsuki uttered a simple command, and the transparent screen appeared before him.

[Novice Pain Resistance: allows the player to consciously reduce sense of pain to a certain extent, does not reduce or eliminate pain received.]

[Stealth] and [Intermediate Archery] both levelled up due to the experiences of the last week. Additionally, [Pain Resistance] had ranked up, and all his stats had reached the maximum level. A satisfied grin spread across Itsuki’s face, the joy of improvement still affected him. However, it was not enough! His determination grew even more at the realization that the system indicated he had the potential to improve further. Every few hours, he would rest on a branch, nibble at a small snack and return to his repetitive mission of hopping from one tree limb to the next. Three breaks passed before Itsuki saw the shadow of his home. As he approached, it became clearer that the house wasn’t in the same situation as when he’d last seen it. Its sight caused previously buried memories to resurface. And for a moment, Itsuki was unaware of where he was. All that preoccupied his mind were the painful flashbacks, the blood, their bodies, the enemy, the rage he’d felt. Everything replayed in his mind without a single detail missing.

Itsuki was so distracted that he almost lost his footing on three instances. The final time he resolved to pause journeying further. It proved to be a wise decision as it didn’t take long for the tears to surface. A while passed, It could’ve been hours or seconds, but Itsuki wasn’t positive how long. He stayed on that one branch, curled up in a fetus position long enough for his ribs to begin hurting and his eyes to have fogged up from the tears. Reaching one hand above the other, he wiped away his soon-to-be dried-up tears. His eyes were already puffy and red from the incessant crying, but he decided to stop feeling sorry for himself. After all, there was no time for that. Soon enough, Itsuki cleaned himself up and began the adventure once more. Every step felt slightly heavier than the last, the closer he got to the house and the harder it became. Memories tried to interfere with his movement. However, Itsuki held his own, admittedly with great difficulty.

It felt like an eternity before he finished the two-hundred-meter journey from the branch he had cried on to the house. A deep frown plastered across Itsuki’s face. The house was in even worse shape than he’d imagined it to be. No, to put it into context, the house was no more. Only piles of ash, residing dust flying about willy nilly, and burnt pieces of what must’ve been walls and doors crowding the floor were left. Thankfully, the amount of debris in the air was relatively light, allowing him to freely breath. Itsuki barely withheld the tears even through his strained effort. It began with a sense of disbelief, then it evolved into hate and sadness and finally settled into a throb of deep guilt and acceptance. Itsuki experienced the whole rainbow experience of emotions in a matter of a few seconds. But by the end of it, he was sure of one thing, revenge was coming for the people that did this, and it wouldn’t be the quick and unsophisticated type. No, it would be methodical. And for that, he would require patience, immense patience, and this he could do, Itsuki was sure of it.

A new spark erupted in Itsuki’s spirit, a silent, attentive and merciless beast. The type that children would be told about when they refused to head to bed. This kind of beast was the scariest, as they were like oceans, thriving in the most raucous of conditions, relentless in their pursuit, intelligent in their plots, serene one instant and utterly frightening the next. The beast had stirred, and Itsuki's naiveté faded with it, this world was harsh, and he would have to be adept enough to endure it.