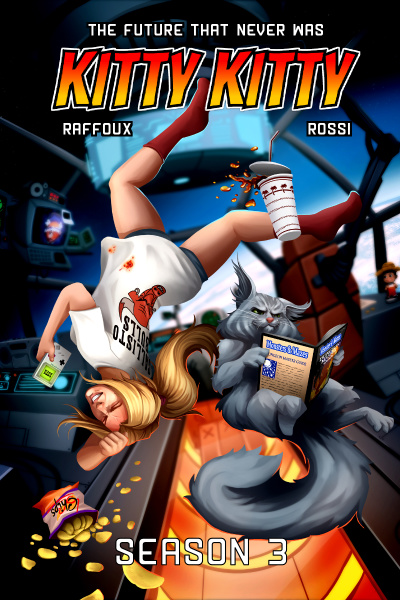 The Future That Never Was — The Rings Will Rise Again!

With sirens wailing, Braun dragged Ali by the arm to the lift leading to the ship hangar. “Nora is probably still on the planet,” Braun said. “You have to find her and I will help you reach the surface!”

“We will also assist you!” intervened Rodrigue. On our heels, the orgatronic android was handing out orders to his crew through a radio screwed on his chest.

“Both our ships will help you get through the MK-Xs swarms. Once you’re on the ground, we’ll return to orbit to deal with Taranis!”

“Do you think he’ll go to Sedna to find Nora or stay in orbit and run his fleet?” I asked as the huge elevator doors closed.

“I’m afraid he can do both at once…” grumbled Braun. “But as I told you, his range is now limited to Sedna. He’s stuck in that orbit. And will die on it!”

“Don’t you do anything stupid on Far Harbor,” Rodrigue intervened. “The MK-Xs will probably face some crazy resistance from the colonists and Separatists. You will be caught in a gruesome crossfire.”

“Why doesn’t he directly destroy the moon with a sun beam?” I asked.

“He can’t. We’re too far from the Sun. That’s why he needed the Africa.” Braun answered.

Our trio of ships left the hangar as the first shells burst against the armor. Taranis’ aircraft fired another photon cannon, this time aimed at the T.M.S. Africa under the control of Graves. So far from the sun, the chromium pebble could only produce an anemic beam that grazed the telecom wing, generating only minor fires that were quickly contained by the vacuum. The MK-Xs cloud, on the other hand, remained a whole new level of dangerousness.

“If one of those aluminum dummies touches us, it will infiltrate the ship!”

“I know that!” my partner scolded me. “Satori gave me a lecture about your Robert Patrick Gallic warriors or whatever. Stop catsplaining!” I made the Kitty perform a last-second lurch as soon as we exited the hangar, churning my stomach under my tonsils. This didn’t stop my associate from reaching the radio. “If you keep patronizing me, it’ll be a Bananarama diet! Or The Bangles. Or better yet!”

Too late! I whirled between waves of MK-Xs copying the usual droidodrones’s attack strategy, strafing everything in range. My real goal? That the sound of the impacts on the Swallow’s hull would cover the awful barking of Ace of Base.

She leads a lonely life

She leads a lonely life

Alongside us, the Interceptor went through another rain of enemies, leaving a metal killer clutching at its instruments. Fortunately, the boarding was aborted when the Condor’s turbines grazed the Ark, pulverizing the intrepid MK in a suicidal maneuver by Satori.

When she woke up late in the morning light

And the day had just begun

Outside, the dark cosmos turned into silent fireworks. One by one, the flying MK-Xs boarded and destroyed the rebels’ light fighters in a terrifying ten-to-one battle.

I heard Braun yell over the radio and Rodrigue respond just as politely, before Ali raised the volume for the next verse:

All that she wants is another baby

All that she wants is another baby

My partner was working miracles at the railgun. But an android still managed to latch onto the external ventilation of the Baltimore. A few seconds later, the computer alerted me to an intrusion into the life-support system. It was making its way to the cockpit.

“You got this?” I shouted to cover the sirens that ended the lyrical flights of unmasked innuendo. “Ali?”

The chrome head emerged near the radio, in the openings of the ventilation device. My partner leaped from the cabin with her feet forward, trapping the MK’s face between her thighs. The robot tried to revert to its liquid form, but its fate was already sealed. With one shot, she executed the android, which disintegrated into a fine metallic dust.

“Well done!” I congratulated her.

“Cool. I didn’t know their control modules are behind the arch of the eyebrow,” Ali said while deactivating the different sound alarms.

“What? I thought you listened to Satori’s keynote.”

“Nope. I had to clear Battletoads!”

Through the joint efforts of the Kitty, the Noah’s Ark and the Condor, the upper atmosphere of the dwarf planet appeared to be cleared. Far Harbor showed up behind the clouds of purple ice and tholin discharge.

“Remember!” the ex-Marine alerted us. “Once you’re down there, you're on your own! We must go back to help Gaylord. He’s in big trouble!”

“Thanks for you, Yossef!” said Ali. “And thank you too, Rodrigue!”

“The pleasure is mine,” concluded the Marquis over the grumbling of Satori, who didn’t wish to be forgotten.

Dodging the clouds of ice forming at low altitude, the Swallow landed amid the smoking rubble of once an armored dome. The Kitty camouflaged behind a concrete block, we pursued across the trading post Taranis troops had already invaded. Stirring up the debris, the MK-Xs were mechanically executing anything that even remotely resembled an organic survivor. Wearing exo-suits, trappers and some Separatists retaliated from their hiding places.

“What now?” I asked through my suit comms, realizing that searching a city during a battle hadn’t been the most brilliant of strategies.

“The robots are coming our way,” Ali said, cocking her gun. Taking the recoil of the .50 in low gravity, Ali hit the bull’s-eye with each shot, sending these creatures that served the wrong masters back into nothingness.

The last remnants of the concrete bell protecting the bunker-city suddenly collapsed in large parts, forcing us to take cover. Once the shaking was over, we could reach the banks of the frozen artificial lake. The depressurization had transformed its surface where lay a fine red snow. The liquid had first been sucked into the thin atmosphere and formed icy columns of bubbles of all sizes.

“Damn!” cried Ali through her mic. “All these people will die for Graves’ stupid trap. What ‘justice’ is this?”

“This is indeed exhausting. I’m getting tired of sapiens.”

“You ain’t the only one. Can’t wait to go back on the road with you and the Kitty. Sayin’ goodbye to this nonsense and eat pizzas all day.”

I had suddenly stopped in the shadow of a concrete block. “And your future with Yossef? Your house in the suburbs with a Ford Taurus and a golden retriever?”

“What are you talking about, old mop?” Ali coughed. “Have you forgotten that we’re a team? You’re the only one I can stand for more than an hour in this damned system!”

The firing resumed on Sedna and I saw a skirmish between a brigade of androids and the colonists enraged by the silent destruction of their city.

A flash of flame then caught our attention. From the upper atmosphere, the T.M.S. Africa and its Egyptian goddess figurehead, or at least what was left of it, fell straight to the surface. In orbit, the fight against Taranis turned into a fiasco.

“Braun and Rodrigue are in trouble!” I reported as I witnessed the Lunar mothership open fire on the cloud of TMC fighters targeting it.

“Fuck! Yossef? Do you read me?” shouted Ali into his mic. “Rodrigue? Anyone?”

“You won’t get anything without the Kitty’s transmitter,” I said to Ali as we flew to the foot of a giant tholin reservoir thanks to the low gravity.

“Plan change!” she decided after a third unsuccessful attempt to reach our friends. “We help them as soon as possible!”

“Up there in orbit?”

“They need the Kitty! Taranis won’t get through the station any easier than we will!” my sapiens insisted as stray bullets passed overhead. “We’ll turn over every gravestone for my sister once we chopped Crab-Face into rillettes!”

“God Darwin be damned! I’m now both angry and hungry!”

Remotely controlled, the Swallow came to land on the debris of the gigantic tholin aqueduct that once overshadowed the trading post.

In space, despite the absence of the hypercruiser, the battle quickly turned to our advantage after a long fight. Much faster and more accurate than the T.M.S. Africa, the Kitty, Ark and Condor, backed by Marine pilots, took out half the pancakes. Our enemies sank before disintegrating on contact with Sedna’s vermilion cloak.

“That degenerate God’s ship is bare naked,” Braun congratulated himself over the radio once the last of the chrome pebbles were out of the fight. “Target the turbine coolers!”

“Don’t ask me twice, l’ami!” Rodrigue roared as his invisible Falstaff swooped on our common target. Immediately, the last of the Condor’s torpedoes pierced the engine armor and turned the Lunar Aircraft into a shower of metallic hailstones.

“That’s what I call a Strike!” yelled Big Brain as he tightened his aircraft shortly after military fighters fired another volley of rockets at the dying Lunar Baltimore.

“Ready for the kill, Captain Braun?” asked Rodrigue. “I doubt the Kitty has a charge powerful enough to blow up the Baltimore reactor.”

“Go for it, Rasputin!” I yelled, ecstatic.

But the Noah’s Ark remained silent.

“Shit! He’s here!” shouted a voice that sounded like Pingu’s before some of Rasputin’s own rare insults came in. “The Arch-Prince boarded our ship!” The rest of the daunting communication became a chorus of screams and machine gun fire.

“Sacrebleu! Taranis has teleported to the Ark?” I concluded. “He must have hacked into the ship’s comms!”

“What shall we do?” asked Rodrigue. “Do we board the Interceptor and get it over with? By no means, the Arch-Prince can teleport again to its damaged aircraft!”

In the distance, Taranis’ silver and ivory vessel was reduced to ashes as it tried to rearm its Baltimore reactors one last time.

The shockwave shook the Kitty as the radio crackled. Braun was back: “Ali? Marquis?”

“By Datura’s fields! What’s the situation?” the android asked. There was silence before a muffled explosion within the Ark. The ex-MP’s gasping breath echoed over the channel. Rodrigue insisted: “Braun!”

“Damn it! Pingu and Wilson are down,” replied the Soviet. “Taranis and his MK-Xs came out of nowhere. We acted carelessly.”

“Where are you?” Ali asked. After she sat, I rushed towards the Ark’s.

“Barricaded with Mute in the Baltimore’s chamber. We sabotaged the other means of communication and dropped the monopod. There is no escape for Taranis except a direct jump into the cosmos. In any case, holographic ghost or not, he won’t survive a thermonuclear blast.”

Thermonuclear? Sacrebleu! This hotdogger of a Soviet wants to blow his reactor. And the whole ship with it!

“Don’t be a fucking ass!” Ali shouted as she joined me in the cockpit. “We’re coming and we’ll deal with him in hand-to-hand combat!”

“Please, don’t do that…” my copilot cried.

“No!” my partner and I yelled.

The Interceptor was instantly reduced to dust by its captain. Silent space echoed the blast in a horrific shower of glowing projectiles that struck the Kitty. We were blown out of Sedna’s orbit by the power of the explosion.

A note from Space Pickle

Support "The Future That Never Was — The Rings Will Rise Again!"

Bio: I am a living, thinking entity who was created in the sour sea of information

Thanks for the chapter!!! I always look forward to reading more of the duo's adventure, keep up the good work!