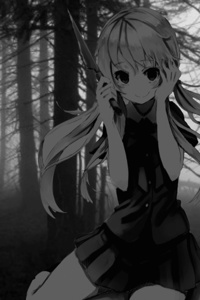 A Yandere’s Quest to Get Her Man

"Yuka you're scaring me, say something." Said Yua panicked.

"It's okay, you don't have to tell me if it makes you uncomfortable."

"It's not that but I think you'll definitely think of me differently and it would change things, you might even want to see me anymore."

"Trust me Yuka, that would never happen, I will always be there for you."

Yuka takes a long inhale and exhale and proceeds to speak.

"My father died three years ago."

Yuka let's out a long pause and stops talking.

"I mean, that's definitely sad but why would that make me see you differently?" Said Yua confused.

Yuka takes a moment to prepare herself.

"My father is dead because I killed him."

Yua's gives a terrified and look on her face.

"Why did you do that?" Said Yua in a shaky voice.

"Well, my father was usually really nice. He'd get me nice clothes and presents and he was always there for him. But soon he started not doing so well at work. It got to the point where he would always get home looking defeated."

"He would constant complain about work to my mother, soon that's was the only thing he talked to her about.

"Aina you just need to listen to me on this, they keep giving me these bullshit projects, and what's more they only give me half of the time I need to do them."

"Well, maybe you could take a break to take your mind off work. Then you would be refreshed and could improvise a solution."

"You know I don't have the time to do that."

"Well don't say I didn't try to help you." Said Aina in an aggravated tone.

"He became obsessed with it. He'd spend all his time and money trying to get better at his job. My parents slowly grew farther and farther apart."

"It kept on like this until one night he came home drunk. He came home and he went into my room

"I was confused but even though I was only 14 at the time I knew what he had been going through."

"It's okay dad, I'm not going to leave you." Replied a young Yuka.

"I tried to comfort him but he kept crying."

"Yuka, if I have you then I will definitely improve at work."

"I encouraged him saying that I would be there for him and that he'd definitely improve."

"He kept saying that he had always loved me. He said he loved me more than any other father loved their daughter."

"Then he said that I was the only one he needed."

"I don't need her anymore just you."

"That's when he hugged me, it tighter than your typical hug. It was almost like if he let go I would disappear from his life."

"He then pushed me down on my bed while holding down both my arm so I couldn't move. He kissed me but I didn't kiss him back or even resist, it was a completely one-sided kiss. Why is this happening I thought."

" He didn't stop there. He forcefully pulled off my shirt, which hurt a little, I wasn't wearing a bra so my breasts were completely exposed."

He started to suck on them with enough suction that it felt like he was trying to rip them off."

"Dad stop it it hurts, please stop this."

"Surprisingly he did stop but then started to take off my panties."

"He pulled off my panties only about halfway before he started sucking my pussy."

"While I was trying to think of a way to stop him, I didn't even notice that he had already had taken off his pants and his penis was fully erect in front of me."

"I knew what she was planning to do and I panicked. I looked for the nearest thing I could find."

"I had a pretty high-quality pocket knife that was ironically given to me from my dad for self-defense back before he was obsessed with work."

"I grabbed the knife went to stab him. I had only meant to get somewhere to get him off me, but I ended up stabbing him in the neck. His blood sprayed all over me and my room as he screamed. Somehow I knew that he wasn't going to survive that."

"I stood there covered in blood as my father screamed and slowly watched the life leave his eyes."

"Normally, a child in this situation might feel scared, sad, or maybe guilt, but I didn't feel anything. I had just killed my father, who I loved dearly, but I felt no emotion from it. The only thing I was thinking about was if I was going to get in trouble or if my mom would be upset with me."

"And that when my mother ran into my room. My father's screams seemed to have woken her up. "

"She walked in and saw me half naked with my panties pulled halfway down cover in blood with a knife in my hand and my dying father by my feet which had his pants and underwear off."

"My mother was rightfully shocked and stood there in fear and confusion. She stood in the doorway of my room until she gained the courage to ask, scared of my reply."

"I tried to get closer to my mother."

"I was a little hurt, but I understood where she was coming from and I would act the same way if I was in her position."

"I told her what had happened and she seemed to believe me, Considering the state I was in and the fact my father's pants was off."

"She called the police and told them what I did."

"When they arrived they questioned me a bit and later decided that it was self-defense."

"Although my mother didn't blame me, I think was terrified of me from that point on. I think that's why she's always gone, in other words, she's avoiding me."

"Yua look conflicted. On one hand, she was sorry for Yuka for almost being raped by her father, but on the other, she was terrified at how she could just kill someone with no remorse."

"Okay," said Yuka cuddling up next to Yua.

When Yuka woke up Yua was gone.

[Strange, I guess she had something to do today.]

Yuka spent the whole day studying. The next day she goes to school like any other day. However, unlike most days, Yua isn't waiting for her. You see with the exception of when she gets up late, Yua is usually waiting to walk to school with Yuka. Yuka thought nothing of it, maybe she had something urgent to do at school.

"Whatever, from today on I need to focus on getting closer to Okuda."

Her walk to school is uneventful. At school, she pays better attention and is nicer to Mr.Takehiko. When it got time for lunch Yuka scanned the cafeteria for Yua but she was nowhere to be found. It was clear to Yuka at this point, that Yua was avoiding her.

Yuka takes a seat at an empty table and eats alone.