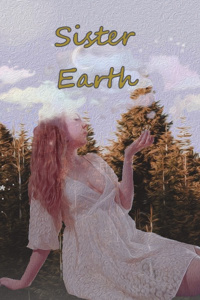 A single Sister Earth observes human life from afar, silently lending a helping hand until one day she requires help from an unlikely ally.

Reviewed at: Ch 11: Fisherman from Luian

This story is quite enjoyable to read. It follows the journey of a Sister Earth after getting stripped of her powers and the journey she takes trying to regain them. While there is some action, this story focuses more on the journey. It feels a bit like a calm road trip seeing the characters interact. There are only 11 chapters out so the story could feasibly go anywhere. The story is also a bit fast-paced. Because of that, I personally couldn't give the story score a five. Even then, I wouldn't be surprised if it just gets better later on.

The characters are great. There are relatively few characters in the story, and even then, there are only two the story has put the spotlight on. However, those two characters have been characterized amazingly. A third main character has recently been introduced, so expect him to also be characterized well.

The style is nice. It is mostly in the POV of our main character, occasionally switching to other characters in some chapters. It's a nice style.

The grammar is also good. I didn't notice any errors or mistakes when reading.

In conclusion, Sister Earth is a nice fantasy novel that I believe might become one of the best novels on this site later on. It's great in many aspects, with my one criticism being that it may be too fast for some people. If you enjoy more grounded fantasies, give this one a try!

Reviewed at: Ch 6: A Barren Land and Lush Forest

Opening /Story - This story is different from the types of stories I typically read. Although with that being said I couldn't stop myself from reading. I like the quick pacing of the story although I wished we had some time to sit with the characters to get to know them more. I was instant drawn into the world of Sister Earth and was quickly invested in Yin as a character.  It also seems like the world has pretty deep lore to it which is always a plus.

Style - The author's first-person style really puts you in the shoes of Yin. You understand her rage at the knights and also feel her confusion as she tries to figure out Carlson. I find first

Grammar - The grammar was good and easy to follow, not much to say here.

Characters - It usually takes me a while to warm up to characters, but I was instantly invested in Yin. I wanted to know who she was and why she was there. As I said up above I wish we had more quiet moments to just sit with the characters to get to know them more. Hopefully, we get more scenes like that in the future because I’m still quite curious about Yin and her history and I'm excited to find out more about Carlson as well.  More importantly, I want to see how they fall in love with each other. I know it's coming it's just a question of how, lol.

I hope, you all will give Sister Earth a read if you want an entertaining and well put together fantasy romance story.

Now this is a story for those that want a change of air from the usual fire and blood business that oversaturated web novels everywhere. This story is about characters with a more 'grounded' circumstances than the power-hungry kind. As written in the tag, there will be romance which already prominent in the early stages of the story. On one side of course our MC, the sister earth (forest sprite/god/fairy, something along that line, you get the idea) and on another side, you guessed it, a knight.

The pacing of the story is quite fast. You get from one scene to the next but with a clear idea of how and why. For now, the chars are swept by the tide of happenings and we witnessed how they cope. Although, for a romance, both of them don't really have a first good impression on each other and will need more time to really fell into that sweet chasm of love.

I feel the char is the weakest point in the story. Our MC needs time to grow into the char she always meant to be and the author is certainly leading up to that. That's the point of character development so I'll put my faith in her.

Overall, a good fantasy romance. Its still a sprout, considering the amount of chapter but seems like it will grow into a great tree.

Story: Sister Earth follows Yin, the eponymous Sister Earth, as she goes around the world and lends her aid where needed. The story begins when she tries to stop a massacre, only to be captured and everything. Fortunately, she is broken out not too long after, but to regain her powers...

It is an interesting premise, one that keeps me wondering as I read along.

Style: This work is written in a first-person PoV, which does swap once in a while. Minor stylistic issues can be spotted here and there, but it won't be an issue to people who aren't all that sensitive. Running the work through a style guide should clean up those issues.

Words used here are charmingly simple — they reflect the thoughts and character of Yin perfectly. The little details are relevant here in helping a discerning reader to piece through her character; more of that below.

Show, not tell is in full force here, and one can understand and infer many things from simply reading.

Grammar: There are some run-on lines, missing commas, sentence fragments and misplaced apostrophes that make me go 'ehh', but overall, no issues there. Words generally flow well, if only made a little halting due to the above issues.

Character: Both Yin and Carlson are complex characters, each with their own convictions and beliefs that are not laid out explicitly. Their thoughts and they're framed show a depth that is beyond simple black-white ideologies, although more chapters are required...

Reviewed at: The Meeting

It's an enjoyable read!

I think it has a lot of potential and it has a good start.

Reviewed at: The Meeting

Story is pretty good so far, a lot better than I expected from a random story. I'm glad that it's not one of those cookie-cutter isekai type of crap that I see all over the internet. How many more stories do we possibly need of those save-the-world and level up types. This appears to be developing in a romantic direction, which I can't say that it's what I normally read, but I definitely look forward to see how it develops. The MC is kind of bratty and ...stupid? If it was me in her situation in the first chapters, I'd just be like 'aight I'm out of here peace'. But I assume that there will be progression and some type of explanation where she grows out of this stage.

Word of advice from a long-time reader of webnovels: try incorporating more cliffhangers that in fact make the situation worse. And then every once in a while when the MC is at the lowest point, the MC takes out their skills and smacks the everloving shit (physically and verbally) out of the enemy. You have to really build out a vile profile for the antagonists, which makes their smackdown more satisfying when it comes. I personally read the first few chapters to see how the story is and move on if I'm not hooked in the first couple chapters. The beginning is interesting, but I'm still a bit lost at what's going on and who the immediate baddies are.

I'm looking forward to the world being fleshed out more, best of luck!

Reviewed at: The Start of the Journey

This is a road trip/adventure story between an earth spirit/magical being and the knight who saved her. The knight needs her help with a quest he’s yet to reveal, so the two of them embark on an epic adventure.

Style: The story is told from the MC’s perspective, and it’s done very well. From the very first chapter, you can tell how she views the world, how she feels about humanity, and her personality in general. The imagery is clear and easy to imagine. It flows well, and there’s a decent amount of action.

Story: The story doesn’t fall into any of the tropes I’ve read about those far. It’s not an OP MC reincarnated into the second coming of Christ kind of thing. Instead, it seems to be an emotional character based journey. It’s an apparently simple quest with endless possibilities at the moment. There’re also hints at a larger conflict which I’m sure will be delved into later on.

Grammar: Sometimes, the user uses commas when dots would be required. However, I hadn’t noticed it until I actually started looking, so it doesn’t distract from the story. Otherwise, the grammar is excellent.

Character: So far, only the two main characters have been described to some degree. The MC, sister earth, is awesome. She’s a fish out of water kind of character. A naïve spirit/magical being who, while trying to help out some humans, ended up caught in their affairs. Another excellent trait of hers is that she's always active, always taking action towards whatever goal she has at the moment. The knight character isn’t as fleshed out yet, but he seems interesting nonetheless.

Overall: So, far it’s a great light read with potential to grow. It remains to be seen how the conflict will escalate or if the story will focus more on the characters and their growth.