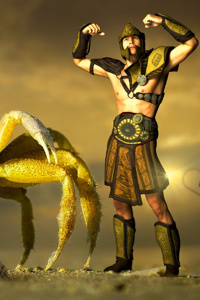 This is the third and final book of The Crab Fighter, a litRPG adventure filled with epicness, hilarity, manly brotherhood and a whole lot of crabs.

But this story is not a comedy. Now, don't get me wrong, my dear reader; it is funny. Hell, it has even been called downright hilarious by a couple of readers that may or may not have been my mother. But in essence, it is not purely comedy, in the same way that it is not purely tragedy. The Crab Fighter is just an intense story. Sometimes you will laugh like a ticklish hyena and sometimes you will cry as if you're reading this on onion paper. Your blood will boil, you will feel sympathy, pity, and passion, and that's all part of the deal. If you're into that, read ahead.

Now, I know what you're thinking. These are rather bold claims. Can I truly support them?

Oh, my dear reader. I most certainly can. Welcome aboard.

Phac has already placed himself against the reigning forces of Salom, foiling their devious plans in a hilariously ingenious manner. Now, having succeeded in the Crab Heist and met up with the orcs, he believes he has escaped.

But the cogs of destiny are not so easy to stop. Interrupting one plan only leads to other, more violent, more desperate measures. Warcries fill the entire island as the Guildmaster's final resort rears its ugly head. Blood will be spilled. But whose?

In this final book, everything becomes clear as the story is heading for a climax. In the end, will our heroes manage to become strong enough? Who will prevail in the brewing civil war? And... at what cost?

Join the Crab Fighter and his companions in this clash of weapons and ideals, and find out. Adventure's waiting!

Please give me feedback, friends, and enjoy! Or, you know... don't. Your call.

Reviewed at: Chapter 13: Something Between Genius and Stupid

Style, & Characters- If you like crass crabs, and low income rough cut bastards with jagged edges on their teeth then welcome to the shinies because that's Phac. We've moved on in this second book from being lost and confused to confident steps down the stairs of this rabbit hole, our story style being a variety of personalies and methodology to problem solving conflicting and adjusting to one another at a pleasant pace with our main view point primarily coming from Phac. A fan of playing loose and paying for the consequnces typically not seeing them coming or caring for them, he often pays in blood, pain, or relationships but that's just the Phacts, our BBEG in opposition to the hot head is a cool, collected, and analytical man viewing things with numbers moving in confidence similar to Phac they are very much alike but drastically reskinned and specced. circumstances permitting they would be wonderful friends. Overall combat immersion is adequate, carrying you off more the characters dialogue and understanding of personality Winged Wolf has led you into interpretting. Otto, a half orc considered a simpleton by some more likely made so from lack of parental guidance outside his system menus, is a good boy. Knows what he he knows and does things his way, beat a high leveled fancy metal man near to death in his Berserker rage using the skills he honed living his life as a sewer dweller with a pipe because... reasons and that man was not being a nice man. The man in question was in fact not nice, but the emotion in Otto and knowing Otto gave more to the combat immersion than Winged wolfs words, he has combat but his characters carry it more so than his words. So far this book we've had little combat aside from the most recent dragon brawl with a upcoming cluster bomb inching closer to a open flame but still. Purely fight analyzing he gets the job done with some decent flourish I think he's improved slightly, but the characters really selling his comabt bits.

Story & Style- Previous bit had some the style but this is the more story focused style. Seriously grading this work alone on its own without previously reading his first book... your probably not gonna care about the people. were still in the early half and previous domino stacking has made it where we can't slow down to run the tutorial and introductions again otherwise the pace will slog and bore, but again early half so some the people you see and read as throw away forgetable NPC's have good back ground in the previous game. So for seriousness I would take a star off on this but I know I'll probably forget in the future to edit it and knowing Winged Wolf the way he builds characters is typically in a more accumalative fashion with info bumps not dumps, so hopefully he delivers on giving people a better understanding through interaction in the future, but for a stand alone that 5 star story score is 4 parts I can like it as a standalone and one part good faith star for a stand alone grade. Decent enough TLDR is Phac Phac'd up stuff, and those situations you get into because "your friends don't know how to shut up and your suddenly on a train with 20 grand riding on the upcoming fight you've been voluntered for in the middle of nowhere under a house in a literal pig pen and gotta walk 9 miles to get to" is happening but toss in demons, a system, and a dreamverse thing taking people in their sleep from our world but memory wiping them of their past. little bits an peices peirce but they don't know who their waking self is.

[non serious for fun review opinions in Spoiler below]

remember people. Phac is a bench.

The continuation of the legendary Crab Fighter after the first manly man of mans fell to a mixture of corruption and the Crab Fighters combat inexprience not giving him the knowledge required to survive a lethal blow from some metal magics the manliest of mans men hailing from the strong Orc Blooded tribes took a killing blow so that Crabby McPhac Phace would live and fell... The Crab Fighter mourned the death of manliest man that made Space Marines look like middle school stick boys and carried on.... Like the wayward son... using the Phaciest of Phacing Crab Fighter ways and the stones of a sewer pipe he laid chaos upon the lands in order to save the un-educated not so manly dissaproving of Orcs people and has escaped the clutches of a manical man.... a man WHO USES THE DEVILRY OF MATH!!!! MATH!! Math I cry!!! to weigh the value of life.... having fled the not so manly mens muddy lands, Phac now Phacing Phacs off to Phac about and who know what the Phac else as Phac is a Phacing son of a Phac.

Now come closer and I will- "HUGG-hh"

the reviewer in question suffered a sudden and natural death involving poison and decaptiation with a rock. Carry on now dear citizen. The Guild protects.

Reviewed at: Chapter 8: A Night For A Lifetime

by Lotrim Wednesday, February 10, 2021 4:33:22 PM
About Phac.. let's see.. One day he woke up at the beach and 'boom!', some months later he already has a book three dedicated to his adventures!
Having read the previous book and now these first chapters of this one, I can say that this story only keeps getting better and more crabbicting as time goes by! The author seems to have completely found the perfect balance between action-packed and relaxing scenes and humorous and serious plotlines. Funny chapters, emotional or serious ones, everything is on the mix. The story itself has been a rollercoaster of events and emotions, with the characters constantly finding themselves in all kinds of unexpected situations. The storyline gets even more intriguing and interesting as the chapters go by and I can't wait to see how this whole idea will unravel in the end!!
What has impressed me about the characters is that everyone has very well- and carefully- written personalities. All the characters, including of course the protagonist, have their general merits and flaws, but all of them have something that makes them special and inspiring in their own way! You can really see the character development throughout the series and a plus is that no character is there just for the sake of being there, they are all important and have their own sub-plots. (PS. I could never think that crabs could actually be that cute and fun to read about, my general idea about crustaceans is forever changed Duncedammit!).
Finally, even though English is not my mother tongue, I think the grammar and vocabulary in this series is quite flawless.
If you are in search of a story that will keep you hooked, this is it. Welcome aboard!
Report

An underrated story of RoyalRoad

This story is one of those stories that people are driven away by the name, but let me assure you it's one of my favorite novels of all time on this website. While the story is treated as comedic, it's not one of those stories that become so silly you don't care about the characters anymore and just feels like it has no soul, Ahem*UntilDeath?*ahem. Anyway, this story is good and you should read this story because it's good. What else reason would you read it for?