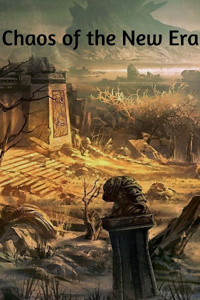 Chaos Of The New Era

Walking outside of the building, Viran passes a small glance towards the old man that had helped him so. Not affected by the affectionate gaze coming from his side, the old man’s attention is already put into a book he had laid out onto the table. As the door closes, a small smile could be seen blossoming on the aged face.

As he walks through a courtyard Viran’s eyes pass from side to side, immediately spotting numerous servants around the estate. The servants all acted as though Viran was not there in front of them, but many could help but give glances towards the boy they pitied so. Viran’s skin shivered as he felt numerous eyes fall upon him, with emotions that weren’t at all likeable. Viran’s fist rises and clenches over his chest, there he can feel an unfamiliar mana. One completely different from his own, the sensation giving off from the mana was soothing to Viran and focusing on the strand of mana imbued within his skin allowed him to calm down and forget the gazes fixated on him.

After having learned the truth of his situation and the naivety he had before, he began to hate the thought of being pitied. After all, the servants around him were all a part of the problem. The servants that were supposed to be under his foot due to the differing social class were in fact the ones that suppressed him all this time, and now because of a little blood they felt pity for him. They weren’t the ones that had ordered Viran to be suppressed, but they were the main antagonists in Viran’s previous life of melancholy.

Viran was still a young boy, and the current influx of feelings swarming throughout his entire mind was tough to deal with. On one hand he had hate for all of those around him, but on the other hand he couldn't help but feel an understanding of the servant’s own plight in a way. He could tell that the servants don’t truly want to hurt Viran in any way, but it was just they had no choice. Viran could not help himself and a deep sigh exited him as he shook his head, he decided not to worry about these feelings.

In truth many of these servants had relatively positive feelings toward Viran, but there were already plenty of servants and guards before Sir Renault that had got punished without Viran’s knowing due to their actions. At that point in time it became clear to the servants that there were people purposely reporting on anyone that would go against Lord Idicium’s rulings. The paranoia of being punished severely by their feared Lord was enough for the servants to completely back away from Viran. Eventually once Gregory had entered Viran’s life, the servants around were joyful for Viran to finally find a friend. That is, until they heard the screaming. Seeing the bloodthirsty attitude of Gregory as he repeatedly tortured Viran was enough to plague them with nightmares here on out, it was a disgusting thing to witness. Worse yet, none of them stood forward to help. They were plagued by the fear of receiving the wrath of Lord Idicium, that was the simple truth of how things went in the estate. The Lord’s words were law and there seemed to be no exceptions.

Viran finally reached his home, his lonely home. The door in front of him was wide open, except now in the courtyard sat two chairs and a campfire already lit. It seemed he would have armed guards in front of his home at all times. Viran’s eyes blinked numerous times as he walked through his home. The pictures that used to line the walls were taken down and searched through. The cabinets that lined his bedroom were searched through thoroughly. The once stocked library was now decadent and the shelves were pushed directly on the ground. Eventually, the call of joy from a Knight announced the search was over. Moments later a Knight dressed in light clothing is waving Sir Renault's journal with a look of joy on his face. The blood from Viran’s face was drained as a pained look surfaced on his face.

“Good job Embren.” An apathetic voice sounded off from behind Viran.

The sudden voice shakes Viran, as he turns to look at the newcomer his eyes tremble. The man standing in front of him was his Father, Lord Idicium. Dressed in a crimson embroidered clothing, the cold and apathetic gaze he had contrasted greatly with his naturally savage looks. Without even turning a gaze towards Viran, he steps forward to receive the journal. His hands fumble through the journal as he quickly flips through the pages within. His stone-like face remains solid the entire time before his head lifts up from the book and his strong voice rings out.

"You get the reward Embren. It seems that this is the only book in the residence?" Numerous nods of approval from the Knights and servants around answer his question. "Very well. No need to clean anything else up. You may all leave.”

Lord Idicium turns his back away from the room and begins to walk away, all without ever glancing at the stricken Viran. Suddenly he feels a small hand grasp at the hem of his vest, looking back he sees Viran with his face facing the floor as a small voice creaks out.

“How… How did you know about the book.”

“You should understand that my orders are final. Especially for someone such as yourself.” The harsh voice echoes in the room, making most of the servants look away in guilt.”It was Spion and Gregory that brought this matter to me, and as long as you remain in this estate my orders are final. There won’t be a next time.”

Shrugging off the hand Lord Idicium tries to walk away again but is met with the same force from Viran. A teary voice, shaking with every word, is heard very clearly by Lord Idicium.

“Why? Why must I listen to you? Not once have you ever spoken my name and not once have you ever acted like a true parent!’ The frustration pent up in the young boy began to spill out in droves. The servants and guards nearby are stricken with fear, as only they know what will occur next.

“Sir Renault showed me the path that I wish to take! The path that you wish to forcibly take away from me! Why? What is so wrong with me? Why is Gregory treated so differently from me? Do you truly possess no feelings towards me?”

The negative emotions and feelings Viran had been accumulating finally gushed out in a tidal wave never felt by him. Every word was spoken with a sharpness that was felt by everyone present in the room, yet the words seemed to still not register with the solid and vacant figure of Lord Idicium. Viran himself did not know what he was truly doing or even feeling. The words just effortlessly spilled out in an angry manner he had only felt once before; he had felt the same when he threw that last punch towards Gregory.

“Why does nothing ever matter to you? Be honest you don’t even like Gregory! You’re only covering for him because… y-you hate me more!” The teardrops that filled the gaps in his eyes finally began to waver and soon his blurry vision finally became clear as he felt a warmness fall down his cheeks. “Why am I not good enough? Why do I even have a brother the same age? What about my Mother… Was she not good enough either! Is that why I don’t even know anything about her? Where is the honor in all of this!”

Viran remained silent after his rant. Faced with a stone cold man that was supposedly his Father, he wished for any kind of reaction from him. Whether or not Viran was punished harshly, he just wished for anything from that man. But nothing came out. The apathy and impassiveness shown by that man only made Viran’s anger increase, and the tears flowed. Viran began to break down.

A voice, unlike any other Viran had ever heard before, answered him directly.

“You are truly like none other, yet you still lack the action needed to have any say in your life. Only through your actions, can you witness a new world.”

The words spoken were filled with a feeling that made Viran go into an awe. The words were spoken by a voice that was impossible to interpret, the voice was filled with both a venerable will and a youthful tone. Viran’s ears twitched from hearing those words, and his tears stopped momentarily in confusion.

The words had come from the library, yet received no reaction from his surroundings.

Without realizing it, Lord Idicium had appeared right next to him and his hand gripped tightly onto his shoulder. The cold whisper throttled his senses and an icy pain rang through his body.

“Those born of sin, cannot speak of honor. Be wary next time you speak to me in that tone.”

Viran’s anger began to repeatedly flare, and wash away only a second later. He was confused by what had just occurred. First there was the unknown voice, and then there was the line Lord Idicium had spoken to him.

As the guards and servants leave, Viran can see the guard Embren leave with a large smile warped over his face. The other servants and guards didn’t dare look in Viran’s direction.

Moments later Viran heaves a deep sigh and looks across the residence. His home was a mess as no one decided to clean up, and it wouldn’t ever be cleaned up. One of the direct orders his Father had made was no one was allowed to walk even a step inside of the residence, much less even speak to him. Walking amongst the trashed hallways, his footsteps echoed loudly in his ears. The entire residence was devoid of sound just like usual, instilling a deep sense of melancholy and loneliness in the young boy.

Finally entering his room, Viran uttered the spell with a stiff expression.

Sensing the mana leave his body and form directly into his hands, Viran felt lonely. For some inexplicable reason the mana itself felt warm to Viran, and now he felt empty.

After spending years in isolation from the rest of the estate Viran never understood what feelings he would often feel. The arrival of Gregory, the friendship made and broken, Sir Leonard and Sir Renault, and his own Father’s attitude finally made Viran understand many things.

He understood the feelings he had been experiencing for years. Loneliness, pain, grief, anger; they all coursed through his veins and with that came desires. A desire to be free, a desire to find his happiness. Someone that would help him on his path, someone that would accept him just as Sir Renault had.

Viran's eyes drift towards the book Sir Leonard had given to him.

"I need to leave…" Viran said to himself.