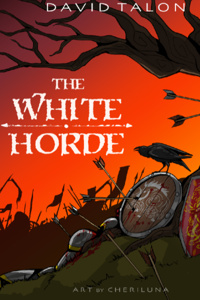 The rewritten version of the same ongoing story, recast into Past Tense and lightly edited.

Inspired by the intrigue, drama, and destruction whispered to us by ancient history, this story is set in a world where magic is slowly dying, and decadent empires struggle against each other as well as against the barbarian hordes pushing ever westward. The story is told from the viewpoints of three people whose actions will change the fate of nations and empires alike:

Amazonia. More than just a female gladiator but a champion of the arena, she will win her freedom at a price: to become a Reaver Knight not seen since the days of ancient Babylonia, with a mission to save the empire that enslaved her from destruction at the hands of a rival empire, the Sasnayams.

Wysper. A Celtic priestess stolen away from her homeland by Muzen, high priest of the Sasnayam deity Yun-Kax, she possesses a mana node like a second heart inside her body which Muzen rips out each time he 'sacrifices' her to their god to appease the masses. Despite her strong will, everyone has a limit, and Muzen's actions have driven Wysper close to the edge of suicide.

Greywolf. Son of the infamous Shadow-walker, Ghostdog, and the Celestial Asena, who was once revered as the Wolf-mother goddess, but now guards caravans for drinking money. His boring life will change when his impulsive act puts Wysper's life in danger, yet saving her risks his death, or enslavement at Muzen's hands.

And all the while, the White Horde sits on the edge of empires, biding its time...

An intriguing world, but we need to linger

Warning: I will try to make this review as spoiler-free as possible, but I might drop some information here and there.

The world the story takes place in is an interesting one, with many cultures inspired by real-world counterparts but mixed in with some brutal magical systems and gods. It reminds me a bit of the Conan setting. And it's clear they have put a lot of thought into each of these cultures, down to details as fine as hand gestures.

However - it's a lot to absorb all at once. New magical concepts, empires and their history - they are all introduced at a rapid pace, which left me feeling a bit lost, especially in the first few chapters. Same goes for characters - there are a lot of them, and many times many of them interacting at once, which can make conversations feel confusing. The characters that we spend more time with, that we linger on, are well-characterized, though.

I think the author has very strong, well-defined ideas about the world they're writing about, the magic that exists in it, the characters in the story, and the political intrigue at the center of the plot. And it's all interesting - and I wouldn't say it's complicated - but it is all very much set deep within this well-defined setting. There's a hurdle the author needs to overcome, which is introducing us to this very detailed world - that needs to be taken at a slower pace.

If you can get past that initial hurdle as a reader, though, you'll get a world of brutal political plotting, strange magic, and well-defined characters - though as I said before, sometimes so many are interacting at once that have not had much time dedicated to them that conversations can become confusing.

Overall, I'd say: This could be a very strong story if the author spent some more time lingering on the introduction to the world, physical descriptions of locations, and the secondary characters - giving the reader some more time to savor and settle in to the world they created. As it is, currently, I think it's mostly on the reader to overcome that hurdle themselves, though there's definitely an interesting setting, story and characters waiting for them if they're willing to do so.

I am really enjoying it so far and am looking forward to seeing where it goes from here. Maybe I am just a sucker for an older style but I definitely found it a refreshing read on this website.  And no notable grammar errors. Overall, originality oozes from the first few chapters.

Search no more! The White Horde is the most compelling story I found on RR together with "The Wandering Inn". David Talon is kidnapping us into a vivid world of fiction that rivals my favourite authors and trumps most fictions I have seen here!

The story has several MC's, but you will see even before you meet them, that even the most random side character is fleshed out in a few words like if he was the main protagonist. By the time David Talon started with the backstory of the important characters, I was still in a daze from the fate of several side characters.

From chapter 1 to Chap 40 there was not a single boring paragraph - nothing that made me stumble and nothing that would make me skip something....

As a reader, I would definitely pay money to get this book!

Now that we have that settled, I will give my feedback as an author:

David is definitely a great mind. His story has the making of a masterpiece and the characters are up to the extreme challenge!

His style and grammar are both far above mine, so I can't really give any less than 5* for it. I hardly found anything wrong while I can definitely say that the style is optimised for his version of a medieval fantasy world

Sub-title: ...Do A complex magic pact that can warp the very core of your being, as they say.

The style is simple and efficient, describing just what is needed. It’s not starved for details, as some stories can be, nor lose itself in pompous description extending like some swamp.

As for description vs dialogue, so far, the mix of the two is balanced, without one side having the upper hand on the other.

The setting that is built right from the start of the first chapter is heavily inspired by Antiquity and, in particular, the Roman Empire and all the other societies that revolved around.

This very solid foundation gave birth to a simple story (anyone could dissect and discovery the simple trope used here) yet a powerful one, because it’s grounded and built from the base to the top without holes.

There are numerous characters, even just at the start of the story, which diminishes what I will call their “screen time” but each is a true little jewel that shines when the spotlight falls upon them

Energetic, full of potential and hooking, The White Horde is a novel whose foundations are powerful, and each step built over it are well-planned, with a great cast at its heart, bizarre, old magic that gives it an exotic feeling, and a clear quest to drive the whole thing forward.

I really like the “Antiquity Period” inspiration of the first chapter.