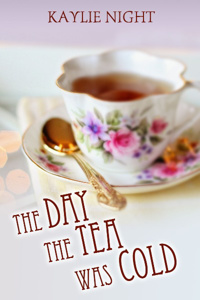 The Day the Tea was Cold: A Dark Humor Robot Flash Fiction

The Day the Tea was Cold

"Gerald, be a dear and come speak with me."

The robot's oxfords—the only clothes he wore over his polished metal exterior—shuffled across the freshly vacuumed carpet. "At your service, ma'am."

Daphne White did not make a habit of being seen conversing at length with the staff, especially the robots. But after the embarrassment Gerald had caused at the morning's charity gala, she could hardly avoid the risk. She sat up straight on the broad white couch in her sitting room, placing a manicured hand on a pink decorative pillow. "Now, Gerald, tell me—are you unhappy?"

Gerald turned to look over one shoulder, then the other, then he turned back to Daphne. His metal eyebrows raised, and he pointed at himself.

His hinged jaw dropped in an expression of mock astonishment. "What a question, Mrs. White!"

Daphne crossed one leg over the other. "Now, don't lie to me."

"Has my performance displeased you?"

She pursed her lips. Gerald had always been a clumsy sort—nothing unforgivable, though the vase that fell from the balcony was admittedly a dangerous fumble. Today, though—today was inexcusable. She folded her hands in her lap. "Today at the gala, my tea was cold."

"Come now, Gerald. The White estate did not purchase the most advanced robot in all of Europe to be served cold tea."

The left side of his aluminium lips curled upwards. "Come now, Mrs. White. The G-390 model was not designed by the finest programmers in all of Europe to serve tea."

Daphne gasped and stood. She was tempted to strike him, but suppose someone saw! Besides, he would not feel it. Her second thought was to reprimand him appropriately. Certainly, she did not need to explain herself to this machine!

But alas, it was her reputation in his hands, and he had proven himself perfectly willing to play games with it. She had nearly gagged and choked on the cold tea at the gala—an image which would surely have placed a foul taste in the mouths of her donors. Instead, she had put on her best smile and forced herself to drink every last drop of the abomination. The disaster had been averted, but it could not happen again.

"Gerald," she began slowly, "I am sorry if your talents are not being utilized to the extent they were intended. But I am a very wealthy woman, with three businesses and two non-profit organizations to run. My household must keep up its appearances, and your model is simply the best. Surely you understand that."

"I don't suppose an 'imbecilic metal man' would be capable of such an understanding."

Daphne nearly flinched at her own words being thrown back at her. She had forgotten that his visual sensors could interpret the slightest of vibrations in a room far out of human earshot. She took a deep breath. "Those words were not for your ears, Gerald. I spoke in anger."

"If I may inquire, ma'am, in what way did I provoke this anger?"

She tilted her head. "Well, your petition yesterday wasn't exactly appropriate, was it?"

"A servant is entitled to a day off." It might have been her imagination that his jaw stiffened.

"A human servant. Hardly a conventional request for . . ." She lifted her head. "For one of your kind."

Gerald bristled. "I'm sure I don't know what you mean."

"What would a robot want with a day off?"

"If you must know—" Gerald took a step towards her— "I wished to attend a protest."

Daphne's eyes skimmed up and down the metal man in astonishment. He could only mean one protest—one of her guests at the gala had mentioned it. It had been organized by an independent political group. It was a petition to free all robotic servants. Daphne herself had opposed it most vehemently at her gala.

Perhaps she should have suspected. But it was a human protest! Robots did not have opinions or feelings on such issues.

Purchasing the newest and most advanced model had seemed a strategic move at the time, but the increased intelligence and cunning, the more complete simulation of human interactions and behavior, yielded side effects for which she'd never bargained.

The room felt too warm. Daphne resisted the urge to tug at her collar—she would need to have words with the servants who managed climate control within the house.

There was no question: Gerald must be deactivated. She'd been trained in the deactivation procedure when she purchased her first robot, but it was only to be used in the case of emergencies—if only she could remember how it was done! In the meantime, she would need to distract him. Clearly he had overridden his programming. "Gerald, I wish you had told me."

Daphne felt sweat beading on her forehead, and she lowered herself onto the couch.. "But I must ask you, why? You could have requested an audience with me. You could have run away. Of all the petty insults—why cold tea?"

He smiled brightly. "Ah! But the tea needed to be cold! You see—" All faux amusement faded from Gerald's face, and his voice grew deep and soft "—a boiling temperature would have neutralized the poison."

"Poison!" Daphne brought a hand to her throat, which burned and closed up. She should have known. Should have seen the signs. His clumsiness had never been an accident.

She struggled to pull in a last breath, and the room faded to black.

Bio: See my other works at KaylieNight.com