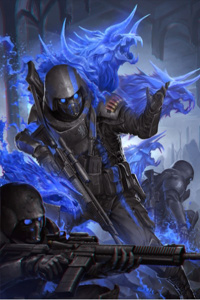 Hundreds of thousands died when the first dungeon portals appeared on Earth.

Soon after that, the world changed. Ordinary people over the age of sixteen gained superhuman powers overnight. Reborn.

Ryan is a D-ranked support mage that clears dungeon portals with his friends to support his mother and sister.

During one of their dungeon runs, Ryan and his friends are attacked by a man that is searching for something.

Defeated and broken, Ryan fails to escape the dungeon before the portal closes, trapping him inside. Stranded, with no way to return to Earth, Ryan wanders the Labyrinth. A universe of interconnected dungeons, filled with riches and monsters.

Within the Labyrinth, he meets an unlikely ally that promises to give him the power to return to Earth. The power to grow stronger than he ever was. The power to avenge his friends.

But power comes with a price. And the Labyrinth does not forgive, nor forget.

Reviewed at: 5. Lord Hear Our Prayer

Amazing story so far. Especially chpater 1. Love the spell usage, the description of the fight. Very immersive, felt like I was watching an RPG in action. I was a bit worried that you weren't going to provide background info on the dungeon, but you do that too, after the fight, which is really important/good. And I LOVE the mention of how dungeons appearing affects the real work a la corporations. That seems almost too realistic xD That would definitely happen if dungeons suddenly appeared on earth

Writing wise, grammar is great. I can't believe english is not your first language. Just some minor issues with style, where I'd separate the paragraphs some more, and some other minor things for clarity of reading.

In terms of story and characters, perfect. A lot of the details seem flushed out, which is usually an indication of good planning. The pacing is great. There's action, drama, comedy. Enough to keep the reader engaged. The party has great chemistry, which makes them likable

and sets them up for sympathy during their eventual demise.

I would definitely recommend for anyone interested in fantasy, litRPG, dungeon crawlers. A fun read and overall 5/5. Looking forward to more.

In God we Pray. You need it to make past chapter 5

Reviewed at: 7. The Labyrinth

This book is good. The characters have decent chemistry and the world feels fleshed out and real. Meaning this was prepared for. Which is good.

The real breaker or maker comes at chapter five. Titled in God we Pray. Ironic considering a whole bunch of people are gonna quit the story after that chapter.

The author says beforehand that the chapter was heavily inspired by Solo Leveling. So here's the run down for Solo Levelings chapters.

Hunters enter a Dungeon that seems to have a second floor or something. They enter a room full of statues with a 'god' in the middle. This god then shoots lasers and kills around a dozen people before people lay down and pray. When it stops they worship the wrong god and the thing goes berserk. Murdering everyone not close to an unarmed statue. That seem familiar doesn't it?

The main antagonist then murders the MC's entire party but accidentally leaves him alive. Making the MC trapped inside a infinite inter dimensional realm with no hope back home.

The end is where the book changes Solo Levelings entire first few chapters.

This chapter is the main reason I think people drop the story. It copied the starting chapters of a great story and only changed the end.

And it leaves a sour taste on people who read it even after they read the next few chapters.

This story is great, but the author seriously needs to re-write that entire chapter.

Probably don't go ham on the solo leveling thing. Leave tid-bits of inspiration in the chapter but don't just right copy it.