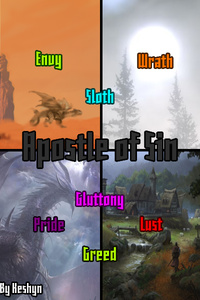 Upon his English college class being suddenly transferred into another world―a video game-like world of magic and mystery―he discovers something peculiar about himself.

After a certain incident, the boy finds himself in a brand new world of enigmatic laws and magical creatures, alone.

Living in a terrifying and cruel world like this, where survival is not his biggest concern...

Can he find a way out of this troubling situation he found himself in?

Will he be able to find some allies to stand by his side?

Watch him as the secrets and mysteries of this fantasy world are uncovered.

Chapters upload Fridays (usually any time between 21:00 and 23:00 BST).
*Occasional weeks where I can't write/upload will occur

really good, but could have been better

this story is super nice. love the pov changes, love the overarching plot, there is a clear end goal and you can actually see it ending in relitivly short amount of time. however if I have one complaint it is that the sins eventually feel like they've been forgotten.

the rulers in his head stop playing a role in assisting him, and the really tragic thing is the sins don't influence him that much.

however despite my somewhat harsh words, I do love this story, I love how it actively tries to show you the good, the bad, and the ugly, even if the author seems to be trying to reign it in from its much darker parts, that is probobly to stop it from becoming a depression fest which I hope it never turns into.

A good turn your brain off story that's easy to follow, an easy to understand power system, and mostly likeable caharacters.

The biggest downside of this story is it's first few chapters, they are quite hard to sit through, especially whenever the character named "Chris" is in focus. Most of the time he isn't in focus, and instead a group of more likeable characters, and the MC.

Also a minor critic is an IMO completly unnecessary one chapter time skip, which goes back again in time the next chapter, that part completly broke my immersion and was pointlessly confusing, if it was suppose to be foreshadowing it would need some work.

Overall it won't be for everyone, but those that like the genre and think the synopsis sounds good should give it a try.:)

Don't let the cover deceive you, this is good.

Tldr: Not trash, well made and quite refreshing sometimes, try it, you might not like it but you won't regret it.

I will start by saying that I'm honestly surprised to be the first person to review this work, it is much better than most stories in this website, and quite well made. In truth it even has multiple points if view written in it that I absolutely despise most of the time because nobody seems to write them well, this author on the other hand managed to do a good job on them, not perfect, but certainly enjoyable.

This is also a Litrpg (who would have thought) and a progression story with some powercreep, but it knows what it is and manages to avoid most pitfalls that the genre brings, it has an actual story that has no plotholes and very good worldbuilding (the strongest point of this story, really, with the different points of view bringing colour to the world around the characters), the characters feel like people instead of cardboard cutouts with the only problem I really found being some interactions between the system and the main characters personality (I HATE puppet main characters without autonomy, but this story subverts that by giving the main character a trait and well timed help that doesn't make him into a deranged meat puppet) but nothing deal breaking or immersion shattering. Honestly worth your time, try it at least 6 chapters before you drop.

Ps: I almost forgot the entire reason why I felt compelled to write a review, this really reminds me of "I am a spider so what?" The novel, not the manga or the anime (all three were made focusing in different areas so they are quite different, believe me) with the heroes, the exile and the different PoVs.

Pss: I honestly believe that the only reason this is not well known is because people see the cover and think it's trash, quite funny since a lot of stories have beautiful covers and horribly written stories.