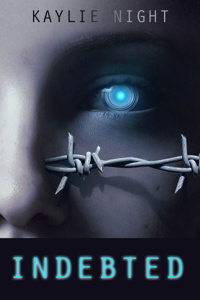 If I could give you one piece of advice, it would be this: never become indebted to a mortal.

I met her on a dinner cruise. Alexia was one of the servers on the ship at one of those "family" reunions our kind never enjoy but never miss, back when we foolishly held them out on the San Francisco Bay. She wore her make up thick and her smile thin, her hair long and her skirt short, her laughter loud and her words soft. I couldn't keep my photoreceptors off of her.

She was so enthusiastic and easy going that now I marvel I ever mistook her for a maton. I was comfortable enough with her that she assumed I was a human. Maybe we wouldn't have spent the evening at each other's sides if we had known. Maybe we still would have. Some humans can always tell the difference between human and maton, but they tend to be the unpleasant sort.

We stood arm in arm up on the top deck looking out over the waves at the blurring skyscrapers lining the smoggy horizon. "You want to get out of here?" she asked me.

I'd made my appearance, so I couldn't see the harm in it, but we were miles from shore. "How?"

"Let's take a lifeboat." She squeezed my hand. "There's one with a high speed motor."

"What about your job?"

She grinned. "I've been meaning to quit."

We stowed away on the metal lifeboat, she in her dress flats and I in my best tie, my hand on the black stick that steered the motor. We were barely a hundred feet away from the cruise ship when the missiles hit.

Those cursed five minutes are a blur to me now. What I know is that the explosions took out everything: the shields, the flotation insurance, the safety net fields, most of the lifeboats. A few mata as well, though most of them flew into the water. The memory has haunted me for the past fifty years: the running, the screaming, the fire, the last few mata clinging to burning pieces of driftwood before their weight pulled the ashes under the surface.

The curse of our design: the density of our species. Every one of them sank like rocks..

Humans say love is more powerful than fear. Don't believe it for a minute. There are cases, stories, where love overpowers fear, but they are rare enough to surprise us, the exception that proves the rule. And that night wasn't an exception. No one went to save the mata. Our lifeboat could have saved a few of them, but in the terror of the moment, I froze.

No programming could have prepared me for this, and my chips were not created to analyze or make decisions in the face of such trauma, such conflict. It is our great psychological weakness that the deepest programming we have for dealing with one another is our debt rituals. Fittingly, it is to debt I reverted that night.

"Ma'am," I said to Alexia when all was silent and when I finally caught my breath, "I believe you have saved my life."

She didn't reply, so I pulled my gaze away from the wreckage. She'd pulled her knees into her chest, tracks of mascara lined her cheeks, and she was rocking, shaking.

I placed one hand on her shoulder and one on my temple, opening the colorful holographic main menu in my vision. The word "Debt" was already center screen, a blinking white circle hovering in midair.

Taking a deep breath, I reached out and touched the hologram, and the synthetic organic material covering my left wrist began to bunch in some places and thin in others, the skin opening, exposing the wiring underneath. Excruciating pain brought tears to my eyes, but there was no other way.

She gasped and jerked away from me, her eyes transfixed on my wrist. "You're a maton!"

Looking back, I am lost as to why this stinging remark didn't alert me to her humanity. Perhaps it was the shock. I proceeded as though she were one of us.

"Alexia, you saved my life." I knelt down in a little puddle on the floor of the lifeboat before her, head lowered, eyes at her feet. "I must recite the debt conditions. You must reply to each with 'I accept.' Do you understand?"

I began the recitation, lowering my head still further. "If not for your mercy, I would have no breath in my lungs. And so to your mercy do I release my autonomy. I am yours to command. Please accept my voluntary servitude in recompense for your altruism." I reached into the gaping wound with my fingers and pulled a loose wire from my wrist, gasping in pain.

"Servitude to me?" Alexia's voice shook. "The whole ship just went down, all those people—"

"Do you accept?" I couldn't stop the ritual once it had begun, and I could barely keep a grip on the wire against the shaking in my hands.

I pried a second loose wire from my forearm, clenching my teeth. "Your request is my law. Your orders outrank those of all others. I cannot deceive you or withhold information from you. I cannot, by your mere request, harm a human or subject myself to destruction, but the value of your safety surpasses my own and any number of others in sum. Do you accept?"

"Please." The pain quickened my heartrate, and blood dripped down my wrist.

"I accept," she choked out.

I connected the two loose wires, and they retreated into my wrist. Last recitation. My skin was already beginning to reseal itself, cool relief following the path of the restitching. "And in the event of your demise, dismemberment, or voluntary release of consciousness, you release me from this debt, returning my freedom."

"What?" My skin resealed itself, but a deep burning kindled in wires far below the surface.

"Noah, do you even care about what just happened to those people?"

"We—we're not programmed to . . ." It seemed she knew nothing about our history, our culture. I had never encountered such a personality chip in my life.

"You mata are sick!"

Chemicals and current coursed in tandem through my limbs, and I rose to my feet. I should have realized sooner. "You're a human."

Tears beaded on her eyelashes as she loosened her grip on her knees, staring up at my eyes. "You thought I was a maton?"

I couldn't speak. I was indebted to a human. I had never heard of a maton refusing to perform the debt ritual, but to my knowledge, no maton had ever become indebted to a mortal. No mortal had ever bothered saving one of us.

"What's going to happen to the mata under the water?"

My head lowered, and my voice quivered like a human's. "The—their flesh will be destroyed by the pressure, then the water will dissolve it. They'll be irreparable within the hour."

A tear rolled down her cheek. "But they won't die."

"It would take a lot more than water to destroy their chips."

"So they'll feel their flesh rotting? For all eternity?"

"Voluntary release of consciousness?" I shook my head. "Another maton has to connect to them directly for a VRC, which means they'd have to go down there, remove their own life support equipment, and perform the release. They'd be trapped down there, too."

"Why can't the VRC be done remotely?"

"The VRC can be installed with a delay, but not from a distance. Trevor Waters's brilliant design." Sparks tingled in my fingertips at the mention of the robotics engineer's name. "No maton is going to go down there."

Her eyes pierced mine. "Then you do it. Release them!"

The order triggered nearly-irresistible electrical signals, but death-fearing adrenaline silenced them. "I can—and must—destroy myself if it is required for your safety, but I cannot for another. My debt is to you, not to them."

"Can I transfer the debt?"

I breathed in to lie—and short circuited. The truth spilled against my will: "You can ask for the debt to be transferred in the event of your death." I gasped and regained my speech. "But please, Alexia, I'm begging you. Accept the release condition!"

"No." Venom dripped from her gaze. "I do not release you. When I die, your debt is passed to the mata under the water. You'll repay your debt by releasing them."

I felt a soft, warm click beneath the synthetic skin in my forearm, and what felt like a cold hand around my flesh-and-blood heart. The bond was permanent. She wouldn't last long—maybe another fifty or sixty years, if I was lucky—and then I would be enslaved.

Bound to return to these cursed waters, to attempt and fail a rescue that would leave me in the same place: alive, unbreathing, and burning with the short circuiting that arises from an unfulfilled debt. Alive and conscious and screaming, until the sun expanded enough to boil the oceans and vaporize the Earth, destroying our chips at last, freeing us all from our watery hell.

A note from Kaylie Night

I always enjoy hearing your thoughts if you have them! :)

Bio: See my other works at KaylieNight.com