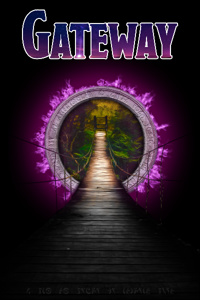 Søren rose from his bow and noted how Sehro's panicked gaze had turned upwards towards the Devourer. The amber, brown, and orange planet swirled in the sky, taking up a full quarter at this time of day. The red whorls that marked the Eyes of the Devourer spun as they always seemed to be spinning. There wasn't anything different about the planet that Søren could discern.

"What's going on Sehro?" he said as he moved close to take Sehro's arm in his hand. He spotted Neeka over the hunter's shoulder as she approached. Sehro latched onto Søren's arms and stared up at him with both eyes.

"The Eyes of the Devourer," Sehro said, his voice strained and hoarse. "The Eyes spoke to me. Called me a Traveler and said they would make us all suffer if I didn't join the Chorus."

Søren's eyes widened at the mention of the Chorus and even more so that Sehro might be a Traveler now.

"Sehro, we'll speak more of this later, but for now, keep it quiet. Enjoy some time with your friends and family. Nothing is going to happen here if we let it." Søren said firmly, trying to present an air of calm and control. Sehro nodded and started to relax a bit. Neeka arrived and looked between the two. Søren shook his head slightly.

"Hello Sehro," Neeka said cautiously. "It is good to see the Lifebringer isn't quite done with you yet."

Sehro nodded to Neeka and hissed lightly. "It is good to be alive. I hope you never know what it feels like to have your body crushed and the crunch of your bones while being chewed on."

"No, I don't imagine that was a pleasant feeling," Søren said. "Put that behind you. You're back and you were missed. We could have used your skills with a bow to take out some harpies."

"Harpies? Why would there be harpies here?" Sehro asked, confused. One eye landed on Neeka, the other on Søren as he split his gaze. "They usually nest further north in the mountains."

"We had an unfortunate encounter with a few of them," Neeka said. "I believe the Scrappers to the north have moved into the mountains and driven the harpies out of their nests. A hidden mission said the harpies respect strength. We hope that by slaying two and driving another off, we have proven we are strong and they will be less likely to strike at us."

Sehro nodded and hissed. His eyes flicked over to look at the Devourer and then back to Søren. A glimmer of strength and determination returned to Sehro's voice and posture. "You are right. We should talk later, but soon. Very soon. My heart sings to see my family before the sun sets." The Fuerven hunter/assassin dug his claws into Søren's arms, briefly forgetting that the tall human didn't have the scaled skin of his kind.

Søren winced and grinned, masking the pain. He gestured with his head to Neeka, to join him off to the side of the platform as dozens of other Fuerven were arriving and coming to see Sehro. Neeka tilted her head curiously and shrugged at Søren. Søren mentally chastised himself and pinched the bridge of his nose, screwing his eyes shut for a moment.

"I only heard the tail end of that conversation, Søren, but it sounded important."

"It is," Søren replied. "Sehro said the Eyes of the Devourer called him a Traveler and warned him that if he didn't join the Chorus, we would all suffer. Have you ever heard of anyone hearing the Eyes? Or saying that they speak to them?"

Neeka's mouth dropped open in shock. She glanced over at Sehro who had been joined by his close family on the platform next to the Waystone.

"No, I don't know of any stories. None like that," Neeka said. "He really said he's a Traveler now?"

"He didn't say it outright, but it was implied. I realize I've only known Sehro for a short time, but he does not strike me as the kind of person to joke about this," Søren said. "The Guide said there were security protocols in place preventing them from telling me more about what was going on down here on Gaia. I wonder if they managed to subvert the programming somehow and this is the result. The system making you into a Traveler could be seen as a fluke, a correction of a bug, a chance. Sehro's conversion could be a coincidence. If it happens again, it's a pattern, but what's the end goal? Is there a goal or is it just chaos? A game or something deeper."

Søren had started pacing back and forth as he spoke more stridently. As if he were having an argument with himself. Neeka reached out and stopped him with a hand on his arm. Her claws touched lightly against his jumpsuit and he quieted immediately.

"Søren, slow down. You speak words I know, but the context is... confusing."

"I'm sorry Neeka. I forget you live here in this amazing world full of technological marvels that seem like magic, even to me."

"It is ok Søren, I want to learn. I think it will be important to learn," she said, turning her gaze to the Waystone and then the crowds of Fuerven gathered around it in small groups, chatting excitedly. She also noticed new hatchlings toddling about the area, chasing and biting the tails of Fuerven too distracted to keep them out of reach. Future warriors and crafters of the village. "It will be important for all of us to learn. You cannot do it all Søren, but you can be a catalyst for change. Whether it was chance that brought you here, or you were chosen by the Lifebringer, you are here now and you have done much for us without asking for anything in return.

Søren furrowed his brow and looked down at the platform, his gaze taking on a faraway look. Neeka stilled her mind and body, as her kind could instinctively. They had not been the swiftest of hunters prior to being uplifted into sentience and sapience by the Lifebringer. Stealth and patience were the dominant traits of the Fuerven.

"What I want, is to understand. To know. I have always loved learning. Loved history. Loved sorting out a good puzzle or mystery and this... this... this world is one giant mystery wrapped up in mystery with a mysterious ribbon around it and tied up in a bow. I like you Neeka and your people, but this world. I want to see it. I want to explore it. I want to find out why I'm here, even if it's just chance. Then I want to go home and see my parents."

Neeka nodded and hissed quietly. She tightened her grip on Søren's arm, careful not to puncture the jumpsuit with her claws. She looked up at Søren with both eyes and her face turned towards him as she spoke.

"Then that is what we shall do. I too have acquired a wanderlust I did not have before. I had my time here as Speaker. Help me protect my people. Help me raise them up to protect themselves and we will see what this world has to offer."

"That is for tomorrow," Neeka said, continuing. "Today, we shall enjoy the return and company of friends and family and see what our new Traveler companion has to share." Neeka pulled Søren away from the Waystone towards a knot of Fuerven, including Torza, Neeka's granddaughter, animatedly talking to Sehro.

Unseen by any of the adults, one of the hatchlings had escaped the gaze of their keepers and was standing next to the Waystone. The massive shard of blue crystal spun near silently in the air a few inches off the platform. The faint sound of crystals sliding against each other could still be heard coming from the Waystone. A high-pitched hum for any that stood close to it. The hatchling stared into the ever shifting depths of the crystal and reached out, touching it on an irregular shaped face. Atlantean runes flashed into view on the crystal and then appeared on the scales of the tiny Fuerven.

The hatchling wandered away from the Waystone, babbling quietly to itself and waving its arms in the air in front of itself. It then chased after something only it could see. Several of the adults noticed this and laughed, commenting about the innocent happiness of the young, and then returned to their conversations.

A note from Cedrych Skye