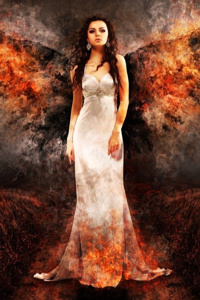 It had been a long day, and Julia had just been trying to get home.

The Abyss wasn't a stop off she had planned to include.

Some folks get summoned, some get reincarnated, others get lost in computer games.

But that's all just stories, games, and even so, she didn't ever expect to get Cursed.

She's doesn't see herself a hero, that's for the crazy folks she knows.

Julia wanted a career, her own family, a sense of accomplishment and control in her life.

She wasn't expecting to have to add keeping her Soul intact.

What will her new path cost her? Will she even recognise herself at the other end?

The Darkness of the Abyss is a place where a single misstep can cost an eternity.

For in darkness, secrets lurk, and some aren't there for the taking.

They are there to take.

This is my first writing effort, so I have been working to improve as it progresses.

The story starts off slow as Julia doesn't just plunge headfirst into trouble, well at least not all the time.

Her story is long, but I know where it's going to take her. Along with the major milestones along the way.

While Julia is the centre of her story, she's not the only force at play.

She's in a world where her actions will cause ripples and will need to endure the effects of them, and ripples caused by others.

Let's start with some points for improvement. The grammar is sporadically horrendous, the reason for the comparatively high score is that the mistake often boils down to the wrong syntax, presumably from rewriting sentences partway through and thus is still readable with no to almost no guesswork needed.

Next up is a compound problem where things aren't explained well or hard to understand (such as the Skill listing being a mess) which coupled with the grammar can make for a challenging riddle, though there ought not to be one.

The characters are well-crafted and realistic. The characters have their own interests and though most are self-serving there are no comic book villains who are evil for the sole purpose of being evil. The protagonist is likeable and has common sense.  Besides this, all characters are unique and fun to read about.

I find the story to as of yet contain a lack of overarching goal or plot that would keep a readers attention to the big picture instead of only focusing on the here and now, but the beginnings of such can already be found, and I consider this fiction already well worth my time and hopefully yours too. Should you wish to give it a try I'd recommend reading at least until chapter 4. All in all, any fan of LitRPGs should read this, and many more besides.

First of all, I think this story is quite good. The premise is intriguing and it is fairly well executed. Instead of reading this review, you should read the story.

The following review is mostly aimed at the author anyway, to hopefully help him or her improve.

The grammar is good.

The story is quite original and there are several subplots being developed. My only nitpick is, that it is starting to feel a bit stagnant at this time, as it doesn't feel like the tension is rising very much anymore.

Take the succubus sisterhood subplot for instance: There was a very interesting narrative going on, namely the fact that the mc had to survive in a place where everyone had a game of their own, while harboring a secret, that if revealed, would lead to a probably horrific ending for her. This subplot was being built up for a few chapters and ended with the mc pretty much escaping (with a few smaller caveats). Ever since then, the story has felt more like a slice of life adventure, than the struggle for survival it was at first.

Now I don't know, what plans there are for this story. Maybe this is intentional, and in that case feel free to ignore everything I've said. Otherwise maybe consider the following ideas:

You could start introducing more conflict. There are a great many interesting characters whose motives could easily come into conflict with our mc's. Usd'ghi for instance, maybe one of her schemes forces Julia to actively work against her, all while knowing that if she is found out, she is f***ed.

Or maybe, one of her current allies, like the elves or one of the churches, starts getting jealous of her cult. Or maybe they think it's too much of a danger to let her have these followers and they start moving against her.

You could even bring back the sisterhood in some way.

Anyway, that's my take on it.

And with that let's get to the style:

While no Brandon Sanderson or George R. R. Martin, the style is alright in my opinion. Sometimes things aren't quite clear to me, but that could just be the fact that I am reading it a chapter at a time, which means I tend to forget certain details.

The dialogue could probably use some work though. Especially the inner monologues with the "voices in her head" are sometimes confusing. In general I would advise to give more information about who is saying what and how (are they shouting, giving an opinion, showing an emotion, whispering, threatening?). Since currently a dialogue often consists of just the words the conversing parties say directly one after another.

The characters are fairly distinct, most of them have a distinct personality, though some are very confusing.

like Lêdhins, I never got that character, might be due to the aforementioned problem of reading a chapter at a time though.

For anyone who has actually read through all that, you should definitely check out this story. It is very much worth your time.

Reviewed at: 67 - The Catalyst

The story is well written with a steadily developing plot. The premise is interesting and remains relevant as the story progresses without devolving into a revenge story. Characters are fleshed out with their own motivations and circumstances. Spelling and grammar are reasonably good, and new chapters are released regularly. Well worth the read.

Going to have to give it a bit more time, but so far this has been an enjoyable romp.

The MC is unique even given the somewhat common transformed into a demon trope, and its refreshing that she's realistically asexual given the situation she's found herself dumped in. Oh and she's not dumb...

Other characters are fleshed out, all have their own motivations and goals.  So far no cardboard villains to be found.

No complaints about the writing, minor grammar issues here and there but nothing too detracting.

One thing that did confuse the hell out of me initially was the inner monologue - I had colour overriden, so I couldnt tell what was going on since everything was black.  Maybe not relying purely on colour for this would be a good idea.  Try italics, hyphenation or something else like hashing the start of the sentence perhaps.

One thing that would be nice is a bit more detail on each of the planes that have been visited.

Interesting concept. The progression flow is awesome. Dialogue tends towards internal, to the exclusion of everything not in the MC's perception or understanding. This can be mostly good, or leave the reader wondering if the MC's soul wasn't just vored by an invisible bucket-demon-mimic she tripped over outside the text. Seriously, the story goes full no-context weird in a few places. Still recommend, one of the best Female MC Demon stories out there.

All in all, a rather fun little story. The grammar could use some work, but the characters are amusing. The story seems to have lots of room to grow, and even at this chapter amount, we're only starting to touch on some of story points, which shows that this story has been planned out quite a bit. Its a LitRPG, with a pretty typical system, not much to say about it.
I'm a big fan of her inner demon snark - fun little jokes and word play abound. Probably the most interesting character so far. If there's any problem with the cast of characters, its that its getting pretty big and growing, with some showing up to only drop out of the story only to not be seen again. Or seen so rarely, that its easy to forget. Just had a major plot point with a character I had to go back and look up, had no memory of whom they were.
The story does have a nice pacing to it. Doesn’t feel like we’re dragging the story along at all, but still nothing too extreme going on. No plot points ignored so far, so typical in LitRPGs when the protagonist just out levels things, which is a huge pet peeve of mine.

A bit slow in the beginning, but gives all the info needed to understand her actions and thinking. A good read all in all, but still feals like the story is still in the beginning phace att chap 51. I look forward what will happen and of she get onto prime material World for more chenanigans.

Overall an interesting and quite unique story. I can't say for sure what direction the story is headed, but I like what I have read so far. While some will say the whole "turned into a demon" has been done before, the way the author handles it is very well done and the horrors of the abyss is very well characterized.

My only major concern is the grammar. Redhand, take more time to edit your work because every chapter so far has some grammar issues. Still get 5 stars though.