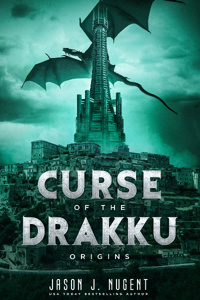 Curse of the Drakku: Origins

When Etain entered the gates of Kulketh, the city was in celebration. Her father often shared with her how when the Drakku and Magus meet, the city turns into a festival with games and music and drinking. Always lots and lots of drinking. Ale, mead, and wine flowed freely as they burst into a jubilee, honoring their Drakku guests.

Humans and Drakku lived harmoniously for as long as anyone remembered. There were always occasional skirmishes and differences needed to be hammered out, just like the present. But were the people celebrating their long-standing friendship or something else?

The problem of Nighthill vexed her. How could the entire population of a village just…disappear? Where did they go? Was there something evil happening? Shouldn’t the Drakku and the Order band together to figure this out instead of accusing the Drakku of something heinous?

The people of Kulketh were drunk in celebrations. They were wild and dancing, laughing and singing. It made no sense to her. Maybe they were coming together out of pity for her father? Maybe they were unaware of what was really happening and thought it was just a time to celebrate since the Dragon Lord was there. Whatever the reason for their actions, it didn’t feel right to Etain. She was inexperienced with people, but like the Drakku, they didn’t see the type to celebrate two sides at odds with one another.

Etain tried to make sense of it all. Without her mother around, she often had to figure things out the hard way. Her mother had died many years ago at the age of 2,575, fairly young for a mature dragon. Since then, Etain stayed close to her father’s side learning what it meant to be the Dragon Lord. He tried hard to teach her all she’d need to know. Most among the Drakku realized her future station while some, especially the Onyx dragon—

“Grymryg?” she asked, breaking her thoughts. A young man slightly older than herself walking ahead of her dressed in a black tunic with thick black hair turned to her.

The man stopped and peered at her. “Etain?” He gasped. “Does your father know? Has he seen you change yet?”

She blushed. “No,” she replied weakly. “Has he seen you?” The man shook his head.

“You…you’re beautiful.” He covered his mouth with his hand.

“Thank you. You are…beautiful yourself.”

Grymryg giggled. “I think they call it handsome, but I’ll take beautiful. What are you doing here? If your father finds you here he’s going to lose it!”

“If you ever become Dragon Lord. It’s not set in stone you know.”

His tone was gentle yet tinged with a touch of jealousy reminding her of their last meeting. Although the Onyx dragons had wanted to claim the role of Dragon Lord for centuries, her father did a masterful job of uniting the clans and most rebellions never got started. The last they spoke, Grymryg reminded her of how precarious that union was.

“When the time comes, I intend on being ready. Do you know where they are?”

Grymryg pointed at the immense Black Tower rising above the city. “There. Inside one of the chambers. Lucky for us, it’s an open tribunal. Any who care to can enter and listen. Would you like to join me?” He held out his arm and Etain wasn’t sure what to do. “You put your arm around mine and we walk together.”

“That’s odd. How are we going to walk together? Humans!”

Grymryg chuckled, then placed her arm around his and led the way.

Etain never realized how handsome he was. In his dragon form, he was strong and sleek, his black scales glimmered in the sunlight. But in his human form, feelings stirred stronger within her. She’d always liked him, even if he had eyes on becoming the Dragon Lord. Most juvenile dragons did. They considered her father too old to understand current society, though she knew more than most how engaged her father was.

As they walked among the people of Kulketh, Etain was inundated with calls from vendors. They cried out for their attention, seeking their money for their food or small items for sale. It overwhelmed her. They had nothing like it back home. They lived a much simpler life in the cavern, not crammed into dwellings close to one another.

Grymryg’s arm was strong. She felt the muscle underneath the thin layer of human skin as he directed them through the crowds. She should’ve known from how he looked as a dragon, but it was something she hardly considered. Pretending to be the Dragon Lord took her attention away from romantic relationships.

They neared the tower and the crowds grew thicker. A man bumped into them. “Sorry,” he said, before turning forward. He had a companion and she overheard the two men talking.

“It’s about time the Order stood up for themselves. The Drakku are more nuisance than friend.”

“Yeah, I’ve been worried they might come after us at any moment.”

“Aye, those things would have the run of the land! It’s time we stand up to ‘em.”

“We’ll see if the rumors are true. The Order ought to be standing their ground inside. No dragon is gonna come in here and tell us what to do!”

The men moved on and she lost their conversation.

“Did you hear that? What’s that mean?” she asked Grymryg.

“Sounds like this is more than a normal meeting between the two sides. There might be trouble.”

My father! What’s gonna happen to my father?

“We should hurry. I need to be there for my father.”

“He’s gonna get so mad when he sees you!”

“It’s a risk well worth it. Especially now. If what those men said was true, something’s about to happen.” Then, as an afterthought she scolded him. “He’ll be angry at you too. Your ceremony hasn’t happened yet.”

He shrugged. “That’s true. But we’re here now. Let’s get inside. We Drakku need to stand united.”

They entered the open doors of the Tower and vanished amongst the crowd.