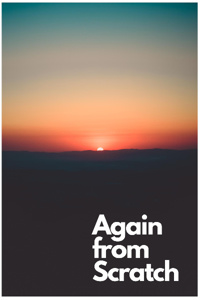 He never knew what he wanted to become, so the winds of time swept him away. Now he finds himself in a new setting, similar yet at the same time so different to what he knew. What will he do now with his fresh start?

What will he do when he starts Again from Scratch?

I had pretty high hopes for this story seeing the synopsis and enjoying the beginning. However, the story quickly became flat. There are many aspects of the MC himself and family that I felt should have came up earlier, but have not shown up at all. I will try to explain my thoughts below.

The MC is someone who has reincarnated as a newborn in a completely different world with a system. However, the 'isekai' theme is incredibly weak. We know pretty much nothing about the backstory of the MC up to this point so far at around chapter 10 (he is like 5 years old now), and he pretty much doesn't seem to act like anyone who has apparently been an adult already (other than what goes on in the MC's head). His parents barely even notice it either. You get more backstory of the MC from the synopsis than the first 10 chapters/roughly 100 pages or so of the actual novel. That's a lot of material lacking I would expect to know about the MC, and you get a large time-skip of about 4+ years right when you were expecting some great development. At this point in the story, I basically have no idea who the MC is other than that he is "focused" and is interested in skills. It's to the point where I don't even know which world the MC is originally from (all you are told is that the current world the MC is in is "pre-industrial" compared to his own).

This is supposed to be a story about a second chance at life. What the hell happened in the first one? For all the prose the other characters get you know nothing about the main character.

Not only that, for a story that is apparently setting up to be explain-heavy regarding skills, and for the MC being from another world and knowing the possibilities of magic, he hasn't once asked anything about it or even tried to find magic for himself in 5 years. He is however, very interested in stone-shaping and gardening. Super weak and lame skills for someone who came from what is maybe present day, especially since there also seems to be a cap on the amount of skills one can have (to be fair, there is a hint that the MC will be working on solving this, but I think this is WAY in the future) and the MC knew this beforehand.

Also, there is a lot of filler prose between memorable or important parts of the story, especially regarding the perspectives of the family. You can skip whole paragraphs without missing anything. I feel that a lot of it is just a waste and could have been served better for learning more about the MC. I'm not even sure if the MC truly cares at all for his family, and feels more like an empty husk who just cares about leveling skills. Even though the author is trying to world-build, it just feels so dull. There is only so much 'slice-of-life' filler you can add before it smothers the plot.

I think this is a good attempt at a story, but ultimately I find it rather dull.

The thing I like most about this story is the skill system. It is built so that a person can have only a few high level skills, forcing people to specialize. Unfortunately for me, the protaganist gets to surpass these limits with his 'skillz'. I mean, the limits are what make it interesting.

I don't think any other part of the story was that great. Grammar has quite a few errors sprinkled throughout. The characters are alright, but really need more meaningful interactions with each other.

The story slow and I'm still unsure what the author wants this story to become. Nineteen chapters in and the main character has gone form birth to ten years old. Which isn't necessarily the problem. A main issue is that there are few events with meaning in that time.

The biggest issue I have with this story is the writting style. It's hard for me to pinpoint exact issues I have with it, but the way this story is writen is just so boring. I found myself wanting to skim most of the story. There are some good impactful moments, but most of the time I felt that entire paragraphs could be more effective if distiled down to a single sentence.

The first 15 chapters are a real slog to get through, poor writing poor grammar poor logic. But it picks up from chapter 16 onward, going from barely legible to somewhat decent. In fact I'd recommend skipping chapters 5-15 you lose next to nothing story wise.

The author admitted that initially he released rough drafts and promised a rewrite but until the starting chapters are just awful.

Nice, let's see where this is going.

There is not much to review but what's there is good.

The story seems to be about the mc discovering or rediscoving how to level in this world's system the "correct" way, or at least a more efficient way.

The grammar could be improved by a quick proofread; there are a couple words in the beginning couple chapters that have a few extra letters. It is still entirely readable.

The main character seems a bit passive/quiet when interacting with other characters but this may just be because the mc is currently a child and social etiquette means he can't properly speak his mind.

The leveling system as shown so far seems similar to ' The Skill Trainer' but definitely has its own peculiarities with the 'Wisps' that have been introduced.

All in all this story is pretty good and I'm looking forward to future chapters.

This is the first time I've done an advanced review and I'm doing this because I believe it should get some more attention.

This still isn't two hundred words wow uh ok, so I'm just going to ramble for a bit to see if this is enough words because doing this on a phone was a terrible idea.

Reviewed at: 21. The world does not stop because you need it to

the opposite of tension..

good ideas hamperd by bad writing style, at lease from my prespective.

the problem is not that its a slice of life in medivel times, but that the author go every direction except forward. its spend so much time on discreptions and on irrlevent things, that i feel like i try to swim in quicksend to get the th good parts.

i dont have time are patient to read a slow, uneventful boring slice of life for a few crames of develpment, of either plot, or litrpg system.

even if the story will ever get to the more active parts, the slow pace will make it boring anyway.

otherwise the ideas in the story are good, and the author is expiranced at writing. also, he dont have spelling erorrs, like my review.

the litrpg system is intresting, but i rether read some of the worst stories here, just because they move FASTERRRRR.

a shame, but i cant recommend.

Reviewed at: 7. Trouble comes knocking I

It may be my own fault, but I did not like this story the first time I tried to read it. Maybe because of the "system" being a thing in almost every story nowadays.

But, I gave another shot and push myself to read the first chapters. And, to my surprise, it was worth it.

Solid grammar, nice sistem and cliches were implemented very well to this point. The carachters aren't that special, but they actually feel nice and I believe that, with some development in the next chapters, they have potential to become very good.

If you do not have a problem with stories with systems, then this is one that I would totally recomend (but, if you don't like it, they keep your distance).

Not an action bomb but Very nice

Reviewed at: 21. The world does not stop because you need it to

There is nothing too complex here. It's easy to get into. Worldbuilding is nice. There is rather an inoffensive family going on. You feel for the characters. And the story has good passing not too fast not too slow.

What bothered me is the main character being too young. I don't like a 5-year-old working in construction. Other than that story has no nonsensical stuff and relatively grounded and not overly gamified.

If you want to get into a story that has more on the crafting side and has an understandable economy and politics this is a nice choice.

The story is just picking up the pace

I've read the other reviews, and have to sort of agree with them. Yet, the story does get better.

We have one small time skip that could have been done better and a few boring moments, but it isn't anything less than what it promises to be.

If you read the description and the tags and liked it, then I can recommend you the story with ease.

This is a slow burn here kinda like the Gilded Hero but instead of summoned they are reincarnated. If you're expecting the mc to start blasting fireballs any time soon you probably wont enjoy this. The pretty drastic time skips help in this regard.

Everything is pretty standard otherwise as far as skills, system, and the like of a litrpg. Leveling skills is somewhat unique in that its either been a long time since I've seen it done or that its entirely orginal. I can't remember. Also magical skills seem a bit rare. Again think Gilded Hero. Looks like most people get more physical/trade skills. Which might be a turn off for some people. Its something I personally enjoy more, however, Its much more dramatic when someone starts throwing fireballs when not everyone has the ability to protect themselves from it. Magic is far more emphasized this way. More grand and scary.

This is incredibly minor, but one thing that stuck out to me is the some of the odd dialogoue. It feels like all of a sudden the author was trying to mimick midieval speak when the rest of the dialogue is normal.  Not sure if its a stylistic thing or what, but sometimes it left me wondering if I had read that right and having to reread. Im explaining it like shit but you'll know what im talking about when you see it.

Otherwise, so far it is an all around decent story.