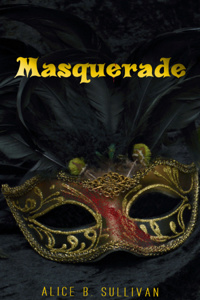 If you'd like to read more of my fiction without having to wait, you can find it here:  https://neoread.neovel.io/user/7652/alice-b-sullivan

There were four killers. People dropped in two’s and three’s. Blood soaked the wood floor, seeping into cracks, coagulating in puddles.

It was the end-of-the-semester masquerade party. Faculty chose to hold it in the auditorium, so the abysmally upbeat tune reverberating off the walls was even more abrasive. People dressed in various colored masks adorned with feathers, fake jewels, and too much glitter. It looked more like a Halloween-themed wedding reception. Students and staff were none the wiser as they chatted, laughed, and stuffed themselves with free desserts. When the guns went off, the music continued, almost as loud as the screams.

Three students managed to flee. I followed. Not even a hundred feet from the door did one lose her footing in high-heels and trip on her long, flowing dress. Her date, suited in his Sunday Best, stopped to help. Now both lay in a heap, bloodied, lifeless.

I had no idea where the other ran off to, but I found myself on the second floor. It was dark save for moonlight shining through windows. The carving knife clutched to my chest trembled in my grasp. I picked it off the roast beef at the buffet table, surprised no one else thought to take it. Music from the auditorium continued to boom, lyrics inaudible, the beat vibrating the floor. I wondered if anyone down there was still alive.

If they were, they wouldn’t be for long.

After peeking around a corner, I quietly emerged and made my way down the hall. Door after door, all of them locked. I shot looks over my shoulders at every sound. The mask I wore obscured my peripheral vision, but I refused to take it off. I couldn’t let them see me.

It was safe to assume the authorities were on their way. Everyone with a cellphone and a spare second called or texted relatives.

Too bad it was too late.

A woman’s scream echoed through the halls. The haunting sound came in gasps as she begged for her life, words soon replaced by a dwindling gurgle of blood to silence.

Footsteps froze me. I tightened my grip on the knife’s handle and listened: faint footfalls on the linoleum and the creak of a door. They were close.

Picking up my pace, I yanked every door handle I passed, turning another corner to continue the routine. Locked. Locked. Locked. All of them! My heart ached with every failed attempt. There was nowhere to hide. I turned around. Shadows shrouded the way I came, a small speck of light at the distal end. I redirected my gaze to the door in front of me and peered through the glass. Rows of empty desks packed the room with a teacher’s desk at the front. Moonlight poured over everything. I reached for the handle, sucking in a breath as it gave way and the door opened.

I slipped inside, shutting the door behind me. Moments of searching felt too long. No nooks. No vents. No shelves. Nothing—nothing—nothing! My lip curled into a snarl and I grunted. Nothing but a useless classroom. What a waste of time!

My fist met the top of a desk in time with the start of a muffled lively tune. I whipped around. As quick as the jingle came, it disappeared, but not before I knew. My sights fell on a tall, thin cabinet in the corner of the room. I strode over and ripped open the doors. The cowering young man inside screamed.

A smile slithered across my face as I raised the carving knife.

Bio: THE COLLAPSE: Book 0 in my AFTERMATH series is on preorder: https://www.amazon.com/dp/B09BDFBN89

Many zombie fictions reveal the aftermath. Mine will show you the beginning. This novella will detail the how of a viral outbreak, taking you on a heart-wrenching journey of familial love.

If you’re looking to satisfy your hunger for zombie fiction, you’ve come to the right place, but when you’re done, I ask that you clean up after yourself. Blood stains are a hassle to remove.