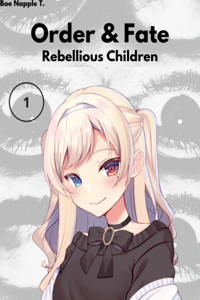 "Thank you, but I'm only 18. I'm not old enough for someone to call me Miss Kato. I appreciate your politeness, though!" Sumire bubbled. She enjoyed compliments quite a bit, given she rarely received any. Why would she anyway? She spent most of her time at home alone. She had no friends, Kuna was gone, and her parents were never around, so it's not like any strangers would go out of their way to say something kind to—

"Oh, I see it! There's the building! No wonder I couldn't find it, it's hidden behind all those buildings!" exclaimed Akiji, separating from Sumire's hand and running towards the building.

She wanted to scold him for running off like that, but it'd be pointless. He'd be coming here alone starting tomorrow, right? What was the need to get overprotective? She decided she'd piggyback on the boy's excitement and help him associate the monorail station with something fun; that way, he wouldn't feel nervous about coming here alone. "I'm a genius!" Sumire thought, raising her chin towards the sky in triumph.

Sumire decided to run alongside Akiji, pointing out various landmarks along the way as they ran. Since it was about 8:45 at this point, most commuters and students were already where they needed to be, so they didn't need to worry about running into people on their dash toward the station. Once they made it there, they both paid the fee to ride the monorail and headed for the waiting area. Thankfully, they didn't need to wait long, or rather, the wait didn't feel that long? Akiji's constant questions about Sumire's "super deadly ability" and his fascination with the monorail station helped time feel as though it was flying by, so when the monorail to Redline finally arrived, she was pleasantly surprised by its apparent punctuality.

Sumire made sure they rode in a car in the very back, as that one usually had nobody in it. If she was going to show off her Imperium, she didn't want anyone to see her. She was pretty self-conscious about it and could probably count on one hand how many times she'd used it during her high school years. Sumire considered how she'd show off her ability to the boy before her thoughts were interrupted by another one of his questions.

"Do you think I'll be okay going to school alone? The only Hero Seeker in Redline was Arrow, and he retired two years ago. What if someone tries to get me?" questioned Akiji, holding tightly onto Sumire's hand and staring out of the window across from them.

"You'll be okay, Akiji. After all, I'm an SSS student! I'm going to become a Seeker pretty soon, but I'm still strong enough to take a bad guy down. If you feel nervous, just call me! I have pretty good ears, so I'll hear you and come flying over like an eagle!".

"You can fly?" asked Akiji, his eyes beginning to light up.

"W-well, I probably could," guessed Sumire, "but I can definitely do this. Super deadly Imperium, go!"

Sumire yelled the chant, shot up from her seat, and walked out in front of Akiji. The glowing eyes and rapt attention from Akiji reminded Sumire of her brother. He'd make the exact same face each time she'd show off her Imperium.

Sumire's pupils narrowed. Her teeth sharpened. Her tongue lengthened. Her mouth widened. She had become snake-like in appearance and began stretching and contorting her body in impossible ways.

His broken eye contact, bitter smile, and slumped shoulders also reminded Sumire of her brother. This was the same trick she'd always use on Kuna. It was stupid to think the result would be any different. Despite his obvious disappointment, the unimpressed boy did his best to be polite.

"That looks...interesting. C-can you grow scales too?", Akiji questioned, his voice dismayed, and his face dampened.

"No, but this~ isn't the cool part.", Sumire boasted, her eerie smirk taking up nearly her entire face. "This~ is the s~uper deadly attack."

Sumire usually wouldn't have used her Imperium like this, but Akiji had challenged her! Her snake ability wasn't impressive? She could potentially strangle someone to death just by elongating her arms around their neck! How is that not cool? Whatever, she just had to show him this. Sumire's mouth opened so wide it seemed as though her jaw would separate from her body. She positioned her head toward the window behind Akiji and spat acid at it. Almost instantly, the window began to dissolve, like acetone on styrofoam.

"Wait, I thought snake venom could only poison things and burn flesh! How did you do that!?", Akiji yelled, the excitement returning to his face.

"Why the hell does this kid know about shit like that?" Sumire asked herself internally. She sighed and answered his question, maintaining her creepy grin, "My venom is a mix~ of poison and ac~id," Sumire hissed.

"That's so cool! What else can you melt?"

Sumire spent the rest of the trip melting various parts of the monorail with her snake venom. By the time the automated chime informing passengers to let them know that they were approaching Redline had played, the two finally realized that the car was nearly destroyed. The windows, railings, handlebars, and even parts of the floor were all melted. The two looked at each other, sharing an awkward smile that quickly transformed into laughter.

"L-let's get our stuff and go to a different car.", Sumire stammered.

The two picked up their bags and practically ran to the monorail's front car, where most of the riders had been staying. When they exited the station and arrived in Redline, Sumire took note of the city's looks. The town had bright lights everywhere; there was a bridge in the distance with a manmade river below it, plenty of bright billboards, and even restaurant employees giving free samples of food on the sidewalks. There were so many cars and buses on the wide city streets that the two decided to play a game with each other to see how long they could speak without being interrupted by a car horn. Wasn't this supposed to be the dangerous city everyone warned people about? The town felt so...alive!

"Sumire, look! It's so co—" Akiji's words were cut short by the most heavenly sight either of them could've imagined. "Is that an Ages Arcade?! Sumire, we have to go! Look, there's a manga store next to it, Sumire, ple~ase can we go?".

"We can't go to an arcade when we both have school—." Sumire's brain had finally processed Akiji's final words. "Y-you said you saw a manga store?".

"Yup," Akiji smiled. He continued, "I bet they have the new volume of Diamond is Indestructible!"

"W-we both have school right now. We're both late. B-besides, the next volume comes out tomorrow. How would they have it?", she protested as she crossed her arms.

"My friend's dad owns a manga shop in Periti, and he said that the stores always get the new volumes a week early so they can show them off in the store and do preorders and stuff.".

Shit, this kid played her like a fiddle. He found out she likes manga and knew exactly what to say! It's like she said earlier, they're already late, right?

Sumire decided that the most responsible decision was to take Akiji to the manga store next to the Ages Arcade. She convinced herself that taking him to buy manga in Redline would help him trick his brain into liking Redline instead of fearing it.

Inside the bookstore was nothing special. It was what anyone would expect: shoulder-high bookshelves, fancy displays with popular books, and even a sitting area for people to read manga in the store. After being unable to find the new volume on the shelves, Akiji suggested asking the clerk directly.

Sumire asked the clerk in the manga store if they had the newest volume of Dodo's Crazy Quest: Diamond is Indestructible and received an answer she hadn't been expecting. The clerk tried to subtly tell her that she'd have to pay extra to get the copies early. Neither Sumire nor Akiji could pick up on his subtlety, though, so he flat out told Sumire that she'd need to pay extra for the early volumes.

"Is that illegal?" Sumire whispered, her eyes glancing around the shop.

"Do you want the manga or not?" the clerk sharply responded.

Sumire looked at Akiji, who was visibly eager to get his hands on the volume to no doubt show off to all of his friends. Sumire sighed and paid the clerk to "see if they had any." Eventually, the clerk returned with two copies of the newest volume of Dodo's Crazy Quest and even threw in a new copy of Deadly Composition for free.

As soon as they exited the store, Sumire wondered why she received the extra manga for free.

Sumire doubted it, but when she opened the book and saw a sticky note with a phone number and a heart, she couldn't help but chuckle. Two compliments in a day!

Bio: i do be writing doe