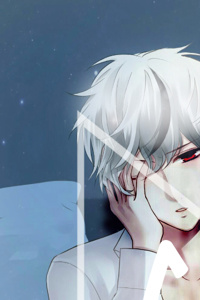 The Crawford's Multiverse of Madness

Chapter 67 - Brother From Another Mother

Here is another chapter for the road.

I actually had COVID a couple of weeks ago, but it has passed by now so...

I can somewhat upload more chapters.

Support me on Patreon ----> patreon.com/The_Young_Flash

It's been a week since school started.

"We must have overlooked someone," Zeel complained while he and Alice were on the roof of the school.

"Who though?" Alice replied "We have checked everyone, maybe they skipped town just as we arrived since Lexa says she doesn't recognize anyone who could be a Cêpan around,"

What if he saw another girl that day instead of Alice? Would he still love that girl? What if it was an animal he saw? Would he love that animal? Zeel shook his head to drive away his wayward thoughts.

"sigh, only you can turn something romantic into me wanting to punch you in the face," Alice said feeling a bit mad but also very happy with Zeel's previous statement.

The bell rang and the duo hopped a distance of ten feet to the ground. Of course, they checked if anyone was around before performing the action. However, Sam Goode had been spying on them after having a suspicion develop in his heart.

Sam had asked Mark why Zeel held him up against the locker during the first week, only to find he did not remember the incident. Mark, of course, gave him a thorough beat down after the question but it was worth it as Sam was able to confirm his suspicions.

Zeel and Alice stuck the landing like professional gymnasts. This was abnormal but not extremely out of place, Sam once again berated himself for believing in his 'ancient astronauts'. So far, while Zeel and Alice showed excellent physical prowess, judging from the scars on their bodies this should not warrant his suspicions.

They were possibly from an army family of ancient martial artists. There were many wonders in the world, and Sam always searched for them. Hence, his threshold of tolerance was beyond the average human.

"Yeah, been trailing us for a couple of days now, probably another one of your obsessed admirers. I stopped counting after the number hit five," Zeel replied lazily since this week alone he had to chase away about fifteen guys who wanted to date his already married wife.

"This felt different," Alice said as she always kept her guard up since encountering Lexa.

"Yeah and weak, so I'm not concerned as of yet. I already had Lexa track whoever it is" Zeel added with his usual nonchalant attitude. Zeel always had the mentality of 'Should I die; I'll take the world with me'. So for him, nobody would be stupid enough to kill him without destroying their planet.

Sam Goode ran from where he was spying at the two and met John whom he could consider an acquaintance at most. Both of them began walking down the corridor. Alice and Zeel were coming down the same corridor.

John, seeing them, tried to sink into himself and avoid eye contact as much as possible. Though Alice and Zeel didn't care as this was a common occurrence amongst the shyer of Alice's admirers.

Zeel, Alice, John, and Sam were passing by each other when suddenly Zeel, Alice, and John stopped. They stood frozen in place as if time had stopped. Sam continued walking not noticing anything happening.

After a couple of seconds, Sam also stopped and looked back to see the three of them still frozen. He walked towards John, attempting to pull him away but John would not budge. It was as if a force was holding him strictly in place, the atmosphere turned tense almost immediately.

"Sam, move away," John said in a heavy voice. He had begun to feel the heaviness of battle weighing on his shoulders. Being watched by Zeel had filled John with intense dread. So much so, that for a brief moment John even considered using Sam to his advantage.

This was against both his morals and identity as a Lorien, but the dread he felt made him consider this action.

John began sliding a knife out of his sleeve at an imperceptible speed, Zeel was faster grabbing his hand bending his wrist. John tried to pivot his body and slip out of Zeel's grip, but Zeel quickly slammed John against the locker.

Zeel had used too much strength as Alice used her telekinesis to cushion the blow, so John wouldn't go through the wall and instead only slightly bent the lockers. Observers had begun watching the altercation, though they had nothing to see as the battle was over the moment it started.

Sam looked as if he was going to help John, so Alice got between him and the duo causing Sam to freeze. He felt a mortal dread overtake his body saying – 'move and die'. That was the only thought currently echoing through his head.

Sarah, who was watching from the side, ran towards Zeel, attempting to convince him to release John. However, all Sarah got for her kindness was a strong grip around the neck by a cautious Alice. When she realized it was Sarah, Alice released her saying "You shouldn't stick your nose is business that doesn't concern you,"

Alice felt a bit sad at having to do that to Sarah, but at this moment she couldn't take any chances, or Zeel would be in danger. One moment of hesitation was all it took to die in any universe.

While holding John, Zeel began to sift through his surface memories while also allowing his own to be read by John. After staying like that for a few seconds, they both came to an understanding so they diffused the current tense atmosphere.

"I am your step-brother," Zeel said as John nodded in affirmation at the excuse they were about to use.

"Brother is that how you'll greet me? We haven't seen each other in a couple of years," John said loud enough for the crowd to hear. John and Zeel then exchanged a manly hug.

"Yeah, hope you have been well all this while?" Zeel asked as the two began to bicker as if they were actual brothers. The crowd quickly lost interest and began to dissipate. This made the tense Alice finally relax.

"Let's head home. I haven't seen stepdad in ages," John said as he exited accompanied by Alice and Zeel.

"Later Sam," John said as he turned around for a brief moment to see the befuddled Sam just staring at the three of them without saying anything.

After John had left for a while, Sam finally got himself together and ran outside to try and catch up with the three, but he couldn't see them anywhere on the streets.

Bio: Amateur Author trying to bring you something original.
Read, indulge, enjoy, and reciprocate whatever you feel.
Computer Science is my passion, but Writing is my anti-passion.

Not that I hate writing, more like a hero and anti-hero type of thing.
If you like my writing, check out Webnovel and Wattpad for more.