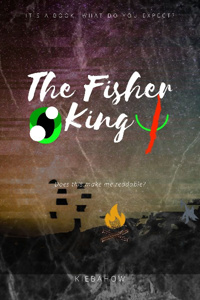 VII. Before We Enter

I don't know if I'm using the author's notes right... God, I hate Mallary's name so much. I suck with naming things.

Right before they entered the tavern, Mallary turned towards Opal and got down on his knees. He reached into a pocket in his pants and pulled out a piece of black cloth. “Here,” Mallary said, removing Opal’s pink hoodie. “Hold still,” he tried to put the bandana around Opal’s mouth, but she resisted.

Opal thought she was going to be hurt when Mallary tried to put the bandana on. It brought back memories of when she was in the woods. She pushed it away, but when he tried again, she grabbed it and threw it away. The wind blew it back into Mallary’s hand. He tried again. But she kicked him in the crotch; it didn’t do anything.

“Stop resisting,” Mallary whispered to her. He tried a few more times and stopped when he saw her start to cry. “It’s alright,” Mallary said, wiping away her tears. “Look! It’s safe.” He then placed it over his face. “See, it won’t hurt you!”

Opal grabbed the bandana out of his hand and examined it. She pulled and twisted it and placed it over her face; it fell off. Picking it up, Opal tried to put it over her face as Mallary did. After trying a few times, she handed it back to Mallary, pointed at it, then her face.

“Alright, alright, I’ll put it on you.” Mallary carefully placed it around her face and wrapped it around, tieing a knot in the back. He then tightened it, which Opal responded by pulling on the bandana.

“I know you may not like it, but don’t tug on it. I’ll have to do it over–” Someone interrupted Mallary.

“You daft bastard! You’re blocking the way!” A man yelled at them.

Mallary got up and replied, “You wanna go fuck face!” Pulling out a crimson dagger with a featherlike silver-red handle for inside his jacket. He threw it at the dude, slicing the guy’s shoulder. “What goes around stabs your back,” raising his hand. The dagger flew back into his open palm.

“Well...” Mallary put the dagger back into his coat. “That was exciting,” he whistled. He pulled Opal’s hoodie back up over her head. “So, are you ready to go in? It might be a little strange in there. Just stay close, and I’ll protect you.”

Opal nodded her head and grabbed his hand, “Go.”

“Alright, do you want to lead the way?” Mallary said, patting her hood.

Opal walked toward the door, followed by Mallary. She then tried to open the door. But could not reach the handle at her size and couldn’t jump. She tried reaching for it by standing on her toes but couldn’t. Frustrated, Opal was about to throw a fit. She closed her eyes one more time and reached for the door handle.

Opal saw the bright lights cracking through the open door and lots of sound. She grew nervous, looking up at Mallary for help.

Opal pushed the door open and entered the Laughing Coffin.

Who hates Mallary's name?
Previous Chapter Fiction Index Next Chapter
About the author