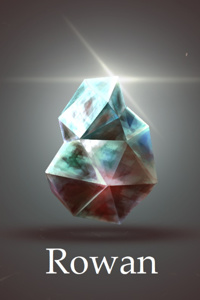 Rowan is a street-rat who just wants to live a normal life. All he yearns for is a roof over his head, a second set of clothes, and maybe the occasional apple pie. Unfortunately, life has other plans for him. Forced to flee the city with only the rags on his back and the knife between his ribs, Rowan sets off into a world that wants him dead.

Since the story just passed the 10k words mark, I thought it would be a good time to get an early review in.

Even though we're very early in the story, there has been enough time for a few things to happen to the main character. We've had a chance to get to know him a little and get beyond the initial story setup.

So far, I've enjoyed where the story is headed. The MC was down on his luck, nearly died, then found a nice group of people to hang out with and learn from for a bit before he gets to the big city. We even got a bit of a training montage. All this before we get to the meat of the story, where I expect a bit of a coming of age/academy style story to pick up a bit.

The characterization is pretty good. Especially in dialogue, character motivations and personality come through clearly. Dialogue is often a weak part of the story in other fics on RR, but I'm glad to say that here the dialogue mostly feels natural; not forced or out of character.

The grammar is impeccable. Grammar is one of those things that when done well, you don't notice it, and when done poorly, it screams at you from the page. No screaming here.

The style of the fic so far has been a bit on the literary side of prose, but that doesn't mean it's stiff or dated, it reads a lot like a traditional fantasy and less like a translated light novel, as so many stories have become lately. Literary fantasy is a plus in my book, I can dig it.

Overall, I'd say it's definitely worth a shot, and as the story picks up it can only get better.

Unimaginative lit rpg Harry Potter. Another chosen one enjoying his plot armor to get everything he wants. Had promise of an orphan taking contorl of his life from one lucky encounter and will power but was ruined by insisting that he is fated to rise to increadible power regardless of how unlikely. Also has the main character coming to conclusions that were revealed in the inner thoughts of other characters with no way he could have had the time to get any new information.

You see Rowan losing his old life and getting a new chance. All of this a put in a quite realistic way without any gods playing around. All the characters so far show a clear and distinct character. Looking foward to read more!

PS: His old story is also worth a read ;)

The characters are good, the writing is adequate, but beyond a few times showing Hit Points, nothing about this is GameLit. Maybe that changes later? The story doesn't need little blue boxes or health bars, though. It's a decent story that is entirely average and I don't have much more to say than that.

Reviewed at: Chapter 10 - Test of Skill

10 chapters in and I'm pulling my hair out because I have to wait fir more. Rowan is a real, living character that makes you want him to succeed, and the gradual introduction to the world bring it all to life without drowning you in info dumps. The author is a true storyteller and wordsmith and I cant wait to see where he takes us with Rowan.

As of Chapter 18, loving this story and excited to see what happens in the future. The characters are not incredibly in-depth as of yet, hoping we get more backstory. The magic system seems to be interesting, but we have only received a peak so far. Thanks for taking the time to write this!

Don’t think there’s ever going to be archaeology

Story is well written for a weird boarding school/Hogwarts expy.  Writing was better on the road as the boarding school isn't written in a way to make sense.  Synopsis matches the story.

Title does nothing match story, not so far.  Possibly never.  Lured here for Tomb raiding/Indiana Jones action.  Did not get that.

Harry Potter couldn't fail out of Hogwarts, but this MC can fail out of Fae-whatever.  He's a decade behind on his classes/skills, he doesn't appear to have any skill, so plot armor is going to have to kick in soon.

I'm enjoying this so far but the direction is worrying. If you were going to recreate Harry Potter you should have included that in the description. School stories suck. Mages also tends to be tedious. I'd much rather read about thrusts, parries and dodges then "I cast fireball and all enemies die". I've enjoyed swordfighting and adventure so far but if it loses those things to become HP it will have lost what I liked about it.

Slow burn, written well enough to suck you in.

So far the story has been an incredibly slow burn, but I've found that to be nothing but a positive.

The main character is a street rat and that can feel a little heavily played in the beginning chapters but the emphasis mellows out to just understanding that the MC has struggled, for pretty much everything, his whole childhood.
Those days are hopefully behind him, and by goodness he wants to keep it that way.

MC is a competent character, but not overly so, and I find the balance between his potential and his pace of learning to be a solid read.