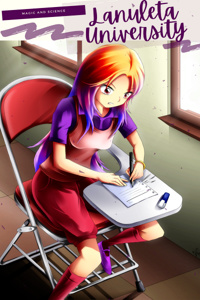 Lanuleta University: A World of Magical Science and Strange Connections

In a world where magic and science go hand in hand, the students of Lanuleta University face challenges beyond just term papers and quirky roommates.

Miguel Reyes, a freshman at the prestigious universe for the scientific study of magic, has a voice inside his head. Not because he's going crazy, though he feels like it some days. He has a deficiency of primary magical ability with the mysterious voice as his only sign of magical aptitude. In this world, most people develop an innate, primary magical talent and then need to study hard for the possibility of a secondary one. Stuck with a seemingly-useless talent, he feels even more pathetic that the cute girl in his Psychology class with mood-ring hair, Nasira Jafri, has no interest in talking to him. However, a series of creepy and unexplained events will force them to work together and learn about one another.