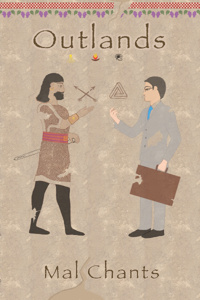 "Don't blame me if dinner's late, I keep getting interrupted," the passer informed them tartly as she stirred a pot bubbling over the fire. Apparently this was going to be old egg-layer stew night. A few amorphous blobs of what were presumably vegetables floated to the surface as she jerked the ladle around. Dried, withered roots and other legumes hung in bunches from the low rafters, forcing Ryou and Darius to duck frequently. A large ham joint and another dead chicken were suspended from hooks in the darkest corner of the one-room building, with a few flies paying worship.

"There's a lot of people traveling from here?" Darius asked, tone casual but gaze cautious, judging, flicking to the five small tick mattresses lined up against one wall and the amount of victuals in view; even Ryou could guess that was too much food for one person alone.

"As thickly as locusts, boys. There's rumor that the Eighteenth Legion is pulling out of Tortora. Imperial citizens and people who can afford to are leaving this province and heading to Roma Praetorium, or to Assyria or the Maurya Empire or even further beyond if that's where they think they'll be safest. Hell, last week I even had a couple of scribes who were going all the way to the Empire of Sung, may Zaratusra bless their shoes because they'll be traveling quite awhile."

"But there's nobody here now," Darius pointed out, eyes roaming over the interior of the inn once again. He'd been scrutinizing shadows from the moment they'd entered.

"No, they all move on in a day or so. I'm the only passer, and there aren't that many Paths going through here. I drop them off at one of the larger circles where they travel on from there. Of course, board and bread cost more there, and they might not get away any sooner; the Praised One didn't make tracks through the lands for anyone's convenience, the Paths are what they are. But they preferred to wait elsewhere, it seems."

When Ryou eventually had the chance to sit at the rustic table and taste elderly chicken stew, he had to concede those other travelers had a point.

After supper, the old woman grabbed a pail of slops and headed out to the barn. Ryou was astoundingly tired considering he'd let the horse do the walking today. He must be used to going to bed with the chickens now. He let Darius lead him to a corner of the inn, and watched his companion put rough homespun blankets down on a straw mattress before he reacted.

Darius looked up in surprise. "Of course."

It'd been no question when they were camping rough. Now, however...It would have been less of a problem if Ryou did not have good cause to know that Darius slept naked if it wasn't too cold. From the way he was stripping off his belt and shirt now, the inn was quite warm enough.

"It's a sestertius a bed," Darius said dryly, interpreting Ryou's silence. "That means we're sharing, though I'm sure there's room in the stables if you prefer. I'll not join you. A passer's house is sacrosanct, which means this is the last good night's sleep we'll get for the next twelveday. But don't be bothered on my behalf. Maybe you and your horse will get along better if you spend the night together."

"I'll pass," said Ryou, loosening the strap over his forearm to remove the knife.

"Everything as you wish it, my fine young sirs?" asked the passer as she walked in, dumping the pail down near the door.

"Good, then I'm turning in. I'll wake you boys before dawn." She walked over to the fire, took a sip from a beer mug that'd been left on the lintel, smacked her toothless gums in appreciation and then arthritically struggled out of her shirt.

Ryou had been taking off his shoes at that point and happened to glance up and then away very quickly, but not fast enough to have missed seeing a gnarled torso. There were more rustling noises. Ryou couldn't guess if she was taking off the breeches or not, and didn't want to know. When he heard her mutter, he glanced up almost reluctantly, to see her slip into a bundle of blankets on a pallet a couple of meters away from the fire. She muttered to herself for another minute, was silent a minute more (Ryou took off his other shoe as quietly as possible) then started to snore.

"Ryou, you heard the woman, we're getting up early. Come to bed." Darius was already under the blankets, his eyes closed.

Ryou slipped in beside him. His discomfort was nothing more than a reflex by now; he knew he was in a different world with different values. He was going to save up all his shock for the way those thugs last night were going to torture and possibly kill him out of hand.

Darius shifted in bed and turned around. Ryou opened his eyes to see what his friend was doing and started as he realized Darius was leaning over him.

The fire in the hearth was the only light left. The innkeeper had removed the smelly bowl of tallow that had illuminated their late-night supper. In the uncertain light, Darius's face was cast in tones of bronze and shadows, his eyes picked out by glints of gold. His face was so close to Ryou's, now that the latter had instinctively hitched up onto his elbows, that he could feel the fall of Darius's hair against his cheek.

"I forgot to tell you, stick close to me when we pass the river tomorrow. Follow in my footsteps as much as you can, and don't do anything that will send us to the Void and back."

Ryou focused on the words and nodded.

"Don't ask any questions she might find suspicious. Passers are charged with keeping an eye out on the movement of people and merchandise. And I think she's naturally curious anyway." The old woman had peppered them with questions over dinner, which Darius had mostly deflected. "If she gets any idea you're from Inland...that will make things complicated."

Darius patted Ryou on the bare skin of his shoulder. "Just stay close to me and you'll be fine. It's not that big a deal, I've walked twelve score Paths in my lifetime."

Ryou nodded again, trying to hide the fact that the skin-to-skin contact had been unexpected and a little troubling.

There was a breath of silence. A log in the fireplace crackled and sparked.

In the firelight, Darius's mouth quirked. "We'll be riding hard the next twelveday, camping out rough if we have to. I've got to get to Essin as quickly as I can."

"Outside of a passer's house, there's no guarantees. We'll be sleeping in turns until we get to where we're going, particularly through Kazanstar. War's ploughed that field until it's only pebbles, it's not safe."

"If that's what you think is best."

"...Our last full night in a safe bed, with a warm body for company. Such a pity to waste it entirely on sleep."

Ryou shook his head minimally. "Darius, this habit of yours, of trying to get under my skin, is a little annoying."

The lips quirked even more. "Oh? What if I'm serious?"

Ryou gave the passer near the hearth a pointed look.

"She might wake up," said Ryou and then bit his tongue. That almost made it sound like he wouldn't object to-

"What if she does?" Darius sounded honestly mystified.

...Apparently nakedness was not the only social stigma these ancient countries had not bothered with.

Ryou's heart went into overdrive when Darius's hand beneath the blanket settled on his thigh.

"These would be more of a problem," said Darius, referring to the pants that Ryou had decisively worn to bed.

The moment tipped in balance, still mostly a joke but suddenly Ryou wasn't sure that was the only thing it was. The way his body was tingling, he also wasn't sure he'd be able or even willing to stop this, even if there was a woman who could be his grandmother snoring by the fire.

Darius's hand left Ryou's thigh, ghosted up, tipped his face to one side so the left was turned towards the firelight. "Your bruises are doing better. You heal fast; the sign of a strong life force." The finger lingered, tapped Ryou's lips lightly a couple of times...a gesture that was nowhere near a joke and more a self-directed admonition, a reminder of what could not be. Then Darius turned away, the blanket moving about them as he settled back down. "Go to sleep," he muttered.

Darius's breathing eventually softened and deepened, a rhythm Ryou was already familiar with. The passer snorted and snored in the background. Ryou stared at the rafters until they disappeared with the death of the fire.

He's a friend- no, not even a friend, we just got thrown together by the most random and strangest circumstances imaginable, Ryou reasoned. I like to approach people who are similar to myself; he's so different he's from another epoch. He's a soldier, he kills for a living, he's got very dangerous people after him, and he's involved in some sort of plot. He also doesn't trust me enough to give me any facts about it despite my life being on the line too, or tell me anything more concrete about himself other than his name and a few other minor details. If he manages to get me back home, something he hasn't even promised to do, then I'll never see him again, and considering everything I've gone through since I met him, that can only be for the best. So what the hell-