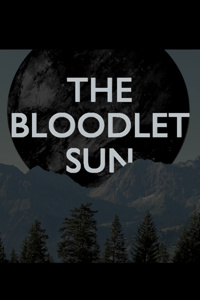 In the morning, although she hadn’t given her decision to anyone, not even Captain Mokob, they were all treating her as though she was good as gone. The conversation around the breakfast table was subdued, and she knew it wasn’t because they were going to miss their guests of the last few days. Even Adri, who would normally try to catch her attention with a shy smile, kept his eyes mostly on his plate.

The notable absence at the table was her father, but Valyen’s mother took it upon herself to share some stories about Kviye like it was some kind of living wake.

“I remember when your family first relocated to Zhakitrinbur for the stormy season. I guess it’s been nearly eighteen years now. You were three and Valyen was six and you insisted on following her everywhere to the point where she had to push you out of the bathroom anytime she needed to go. She goes up to me one day and say ‘Mom, we need to do something about Kvee. Maybe sell her to some fishers.’ I nearly died trying not to laugh but then I put my serious face on and said, ‘Val, don’t be ridiculous. This is what true friendship looks like. You find something like this, and you must never ever let it go.’ And that’s what you’ve been since, pretty much inseparable.”

After breakfast, Kviye caught up with Adri.

“Hey, sorry, just so you know, I didn’t tell anyone anything but they’ve been treating me like I have anyway.”

There was no accusation in his voice, no anger or even disappointment; this more than anything is what caught her off guard.

“Yes, I am.” Her heart skipped a few beats and she had to look off to her side. “Oh, that was really weird to actually say out loud. But hey, this isn’t a forever thing,” she said, her eyes back on him. “It’s only until we get back on our feet, when I have enough for my own ship and can come and go freely. Maybe I can take you with me.”

“You know where to find me.”

She could see it around his eyes – it was not one of his good days and yet he still joined them for her last breakfast on Tanfana. She pulled him into an embrace then, holding him tight against her.

“I’ll see you again. I promise,” she said, and all Adri could do, was to pat her on the back.

The few hours it took to get the Oshken all tested for launch, with the windows of the house vibrating at the roar of its engines, were the longest of Kviye’s life. She wondered, more than once, how she was supposed to spend months aboard a starship when only a few hours in Valyen’s room suffocated her to the point that she wanted to exit out the window. Still, when the ship was all prepared, she’d come down with her single bag, ready to start anew.

In the kitchen, she found Valyen’s mom and Grandma Morozo. When Kviye leaned in or a hug, the old woman said, “Make sure to say hello to my Mitya for me.”

“Bah! We always say they go somewhere out there when they die,” Grandma Morozo made a vague waving motion over her head, “Who’s to say that our Kviye here won’t bump into him, you know, ‘out there’?”

Kviye let out a small laugh. “I’ll be sure to give him your best.”

“Ha! He doesn’t deserve my best. You make sure he knows that.”

Valyen’s mom walked Kviye outside, and thrust a heavy bundle into her hands as she put her hand on Kviye’s shoulder.

“Now, we made sure that the Oshken had some fresh stock, but I know this one’s your favourite, so it’s just for you and not even –”

A heavy bag dropped next to Kviye and she looked away from Valyen’s mom to find Valyen herself standing next to them.

“What’s this?” Kviye asked, looking down at the bag.

“My travel bag,” Valyen said gruffly. “You got one too, so I don’t know why you’re so confused.”

“Val?” Kviye managed, her voice so faint even she hardly heard it.

Some of her last breaths of fresh atmosphere, and Kviye could hardly breathe from her tight throat. She dropped her bag and enveloped Valyen in a squeeze.

“C’mon Kvee, let’s not start by embarrassing ourselves in front of our new crew.” Valyen’s wanted to sound aloof, but Kviye could clearly hear Valyen’s own voice was breaking. Kviye looked behind her and found Captain Mokob and Samir standing near the entrance of the Oshken. Then she turned to Kviye’s mom and mouthed “thank you”, knowing that attempting to speak directly to her would have only ended one way.

“You take care of each other, okay?” Valyen’s mom said to Kviye before saying her goodbyes to her own daughter as Kviye watched them from the base of the ramp. Uncle Dekan was there, looking morose. Adri hung back towards the entrance and out of earshot. And if Kviye looked hard, she could even make out Grandma Morozo through the window, watching intently, even on days where there was nothing to watch.

“He’ll be here,” Valyen said, rejoining Kviye by her side, her bag again over her shoulder.

“No, he won’t.” Kviye looked up into the expansive Tanfana sky, the faint outline of their paternal gas giant visible opposite the sun. “He wasn’t there to see my mother go and he won’t see me.” Kviye took a deep breath. “Read to go?”

“Ready as I’ll ever be. That is to say, not at all. But I’m not turning back now.”
​
They headed up the ramp together, independently making the decision that the time for looking back was over. Captain Mokob and Samir disappeared into the ship ahead of them. Inside the comet chaser, Kviye found that its metal corridors were darker and more cramped, and their rusty orange colour colder and more foreboding. Behind the two of them, the loading door of the Oshken closed with a hiss, and wouldn’t be opened again for another three months.