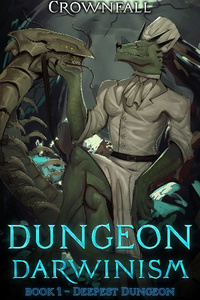 Dungeons are a lot like sea turtles. They’re born in clutches of dozens, if not hundreds. A hundred may be born at one time, buried in still burning cities, or in forests where the canopy hides the sky, or in ocean trenches at the bottom of the sea. But only one in a clutch ever makes it to the surface.

Everyone knows about dungeons— monstrous factories that emerge out of the earth, full of riches and Arcana and power— and monsters.

Mark doesn’t know anything about dungeons. He isn’t from this world. He's been reborn in another world.

Just one problem: he is half of a dungeoncore.

The other half? A Dark Lord.

This is a fun dungeon story, I'd been looking for a dual core story since that last one went M.I.A. ...

This isn't a story were the two MC's of different alignments fight & bicker over idealogies untill the reader get's annoyed enough to drop it. Just a neutral evil character MC and a neutral good MC questioning what the other does at times. This also brings out the hope that one MC won't switch over to the other side, and the whole story won't end up as an excuse to preach about why the other side is stupid and irrational. Those are annoying, no matter which side the author prefers.

Anyway, 10/10 would recommend. Some of the different perspective chapters can be boring, but to each their own.

Style is has no real overwhelmimg problems.

Noted no grammer errors... Actually, I think I saw one, but I didn't note it down. Doesn't break reader immersion, anyway.

Interesting characters, seen the dynamic done many times before, but never this well! 😎

Most times the 'good' MC seems rather naive and the 'bad' MC seems like a madman, no matter the intention of the author... Here, both sides seem like real people.

If you like stories where you know the author has build a whole world but introduce it over time, you will like this! I do, atleast!

Changes perspective between diffrent and the writing subtly changs with that, helps give the characters depth. But will the author be able to make the ... deepest characters? Dun dun DUN, read for yourself, lol.

Like the writing and characters but the worldbuilding the most!

Creatures of Light and Darkness

Before I begin, a disclaimer: I've never read a 'Dungeoncore' style story or anything like it, so I'm seeing this with fresh eyes, so to speak. However, so far I'm really enjoying exploring this dungeon. I'm Old School, and in some ways this reminds me of Roger Zelazny's writing, where his worlds became surreal at times while remaining grounded in reality.

The story opens with a literary device also used by filmmakers, where it begins by showing a wide angle view of the world before steadily narrowing the view until it reaches the spot where the story takes place. From then on, the tale focuses on two people with wildly different viewpoints who are…literally…forced to work together. I like how this was set up, and the strong potential in each one for character growth.

Likewise the minor characters. I’m looking forward to seeing how they continue growing, as well as how new additions fit in to the group. I’m also intrigued by the ‘Dungeoncore’ idea, and how the author takes their time in letting it grow as well, expanding our knowledge as the characters discover more about their new abode.

To me, fantasy works best when it’s grounded in natural laws (which don’t need to conform to Earth-based physics, but do need to be consistent). So far, the story is doing a good job keeping its internal logic straight, at least as far as I can tell. Some might complain there isn’t enough ‘action’; however, I’m finding the tension between the two characters as they work differently towards common goals is driving the story quite well, as are the minor characters as they develop.

Quibbles? I can’t really think of any; the grammar is good, with very few mistakes that I’ve found, and while initially I wasn’t sure about the whole ‘Dungeon as a self-contained (more or less) ecosystem’, the world building makes logical sense (I’m not sure how the upper levels support their populations, but that will be discovered in time, I’m sure).

All in all, so far it’s a well crafted story.

I am very new to reading this genre, but i can say the aithor has made a very enjoyable story here.

The pacing is really good in the first act so far so I can't wait for the author to write more.

Easily one of my favourite novels im reading currently!