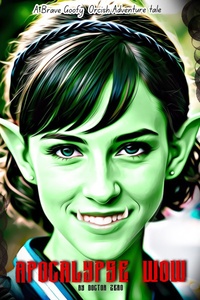 I could be a delusional dickhead. Need to keep a close eye on myself.

The leader of the Flaming Face Kick Gang dissolves in my hands. I slip his sacred text into my pocket. Wonder if he died angry? Shall we meet again? I don’t care.

“On it.” thinks Darkstar. He hovers left to commit quiet homicide.

Today has been a disastertunity. It started with a simple plan to kill one annoying gnome. Then I lost most of my best troops in a weird ambush I may have pulled on myself. Then a dragon showed up and killed the rest of my elites. Then everything got really dark and quiet.

Luckily Darkstar and Mindguy survived the first two slaughters. Neither is particularly bothered by darkness or silence. That said, they’re not providing our security blanket either. At any moment the darkness could clear, leaving us to be dragon snacks. Now would be a good time to leave. Darkstar ain’t even in his fireproof armor. And yet…

My pockets are bulging with the sacred texts of my worst enemies. They’re just stumbling around, lost and confused. Waiting for me to grab them. How could I not collect a few more? With that said…

There’s another howl of agony. Dragonfire briefly illuminates two gangsters locked in a knife fight before they’re immolated. I shake my head. Amateurs. I shake Bad Gary’s head, snapping his neck. Slip his text in a pocket and watch the magical fireworks.

Seems that magic is still visible and death screams can still be heard. I can only imagine everyone has already figured that out, but some of them still can’t commit murder quietly. It’s a disgrace. Though, not everyone has a psychic calling out enemy positions, so maybe I should be less judgemental.

Magic missiles whip about the sky, firing at the dragon’s last position. A few other magic-users fire spells at the dragon, the missile wielder, or each other. A large group is firing chaos bolts in formation. Probably Wreckworld Battle Magi. I loft a fireball at them, then run like hell before my position is blasted by magic, dragonfire, or worse.

The magic dies down, and we stop running so Mindguy and I can catch our breath. “Are we targeting Wreckworld mercenaries now?”

“No point.” I think. “Death doesn’t slow them down. They’re kinda like us in that respect.”

“So why do you keep lighting them up?” asks Mindguy.

“Hmm. I don’t know. Maybe they’re too much like us? Imitation is the sincerest form of competition.”

Dang. I’m losing the thread. Today has been too emotional. My turf has been invaded by zealots from Winter and mercenaries from Wreckworld. I’ve lost the best part of my gang. And I’ve been attacked by a dragon. And a small gnomic ninja, who really freaked me out for some reason.

But I’ve also slaughtered my most persistent enemies. The fucking asshole gang leaders who’ve been grinding me down for as long as I can remember. The festering assbags who would never make peace with me, but banded together to wipe me out. Popping these hypocritical pimples has been a balm for my soul. I can finally envision a future where the Tiger Gang not only survives, but maybe finds Tiger!

As long as invaders from other realms don’t wipe us out. Or a dragon eats us. Because if I lose these sacred texts, or Mindguy gets killed, the other gangs will build back faster than us, and then we’re perma-fucked.

Today's gains are incredible, but so fragile. The invaders and the dragon are keeping each other busy, but that equilibrium can’t last. It’s time to go.

Fuck I hate that guy. One more, then we go.

Moments later, I’m the High Druid of the Eternal Flame, but Mindguy has troubling news.

“There’s a Dark Elf approaching. I think he can see us.”

“Shall I beat him to death?” thinks Darkstar.

“He’s probably the source of the darkness.” adds Mindguy.

“Shall I beat him halfway to death?” asks Darkstar.

Darkstar’s armored form hovers to intercept the dark elf. Mindguy informs me that the elf awaits him confidently. We smile. People are often confident they can beat Darkstar. And they never learn otherwise. It’s a source of cyclical satisfaction.

A few seconds later, the shadows recede from Darkstar and he’s incinerated by the dragon.

“I think we forgot something.” muses Mindguy.

“We suspected he was controlling the darkness.” thinks Mindguy. “And knew we needed the darkness to hide from the dragon.”

“Yeah, I got it bud. You can stop explaining now.”

“Bit of a confidence rattler, eh? Makes me wonder what else we’re forgetting.”

I sigh. Wait for the circular firing squad of mystical mayhem to die down. When it does, I growl. “What do you want, asshole?”

“Hi Cyan. Give me the orc and you can leave.”

“I think he can see AND hear us.” explains Mindguy. “Or maybe he’s lip reading?”

Mindguy is definitely confused. “If he’s lip reading, how are we hearing him? I can’t even see his lips…”

An old, beardless gnome ambles between us. Feeling his way along with a stick, he definitely can’t see or hear. I think it’s the guy who started all this.

I shrug. “I thought he was with you.”

The gnome uses his stick to locate the superheated husk of Darkstar’s lightning proof armor. Nods in satisfaction. My ears start to ache.

A huge, jagged thunderbolt lights the sky, slams down straight through the dragon - briefly illuminating his bones - and detonates the building for the second time tonight.

I awake on my back in a crater. The shadows and silence are gone. So is Mindguy. I tried to shelter him from the blast, but all I’m holding is his scorched robes. All around me is a pitched battle between a smoking dragon and all comers, but I don’t care. I’m dead already.

We should have left. I got greedy and lost everything. Mindguy’s powers were the only thing that let us fight off the coalition of gangs. They outnumber us ten to one, but we recovered ten times as fast, so it balanced out. Now we’re fucked. They’re gonna total party kill us over and over until we forget we ever existed.

But I wasn’t that greedy was I? Just desperate. Because we were already fucked, I just couldn’t face it. We were never going to survive the combined wrath of the other gangs. All of our plans were delusional. You can’t win in Helhome. If you’re weak, they use you to death. If you’re strong, they gang up on you.

My real mistake was staying here. I look at the sacred texts bulging from my pockets. What the fuck is wrong with me? I’ve lost my mind. Tiger isn’t even here. We figured that out a long time ago.

The old gnome walks up to me. “Hey buddy.”

I shouldn’t leave my friends. Or should I? They won’t remember me. Won’t understand why we should leave. Or maybe they will remember me. Maybe leaving is the best thing I can do for them.

A big orc girl saunters over.

“Where have you been?” asks Presto.

“Oh, sneaking up on walls. Stabbing walls. Walking into walls. I could not see shit. I am not good at fighting in the dark.” She waves cheerily. “Hi Cy!”

“Hey Copycat.” I look at the shit show around us. The dragon is guzzling down Wreckworld Battle Magi while the Silence pours magic missiles in his ear. “I think it’s time to go. Tiger isn’t here. I assume you guys searched Winter and… probably Gianthome?”

They look at each other shiftily. “Yeah. Didn’t see him. Or find him. Didn’t find him. We looked for him.”

I nod. Dump the sacred texts from my pockets. “May as well finish the lower realms.”

“Um…” Copycat hesitates. “Don’t we need to be in a pit to get to Darkhome?”

They look at each other. Nod. Take my hands.

It mutters in a familiar voice. “Oh man, we are so fucked. I don’t know what to do. I really, really, need some help. Any help. But preferably somebody who likes me and is extremely and dangerously competent.”

I pat him on the back and look around in bemusement. I guess we got here just in time. Or, at least some of us did. There’s just me and two gnomes in the crystal tunnel.

Patreon
Do we lack control? If life has a point how do we do it?
Previous Chapter Fiction Index Next Chapter
About the author