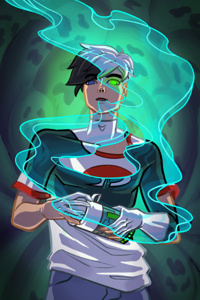 Dying sucks. Waking up in a world filled with Aliens, Gods, and Monsters sucksx2. Learning that I'm technically still dead, well that takes the cake.

At the beginning the story had a really good start, but then we got introduced to the Authors 'self-insert dream crush' around chapter 2. It's very obvious that it is by how much detail the Author went into describing her and how fast they paired her with the MC. It was honestly pretty jarring and did ruin the story a bit for me, but not much that I stopped. What did make me stop though was half-way through chapter 4.

In chapter 4 (without saying spoilers), I found the MC went out of control and blew the situation out of proportion. With him doing whatever he wanted to "solve it" without thinking about repercussions and what he was actually doing. I personally hated how the MC initially acted and I just couldn't continue reading past the half-way point of that chapter; it ruined it for me.

Overall, if you like really heavy self-insert stories, with the Author clearly shipping their dream girl/crush with the MC and with the MC doing whatever they want by defending themselves with their own warped logic and point of view, then this story is for you. Me? It's not. The first chapter was pretty good though.

I am not usually fond of fan fiction, but that is because it is often of poor quality and not imaginative in itself. This fiction has neither problem.

The world is clearly described, presented and thought out, with characters that feel natural and seem to belong in the narration. The effect of clunky caricatures that don’t quite fit together that fan fiction often has is completely absent. Instead, it seems like a well understood world with fully formed characters in a distinct plot, which just happens to be based off the Marvel content.

I am writing this after reading chapter 5, so I cannot vouch for how the stories quality will progress. However, events and interactions feel natural so far, and things are presented in a way that does not rely on an interest in or knowledge of Marvel.

The basic premise would be what if a person is isekai'd into a mutant in the Marvel Universe with all the powers of Danny Phantom from Nickelodean. This MCU in this story seems to include all charaters in Marvel including mutants, fantastic 4, and eventual avengers (author makes it clear this is before the first Iron Man movie). One should not make the mistake of think the MC is Danny Phantom though. He does appear to be amoral and does not have any qualms of killing a villian

Its an interesting idea and I am interested to see where it would go. I am also curious to see how the character will develop. To what extent will he go to divert his timeline from the original MCU timeline?