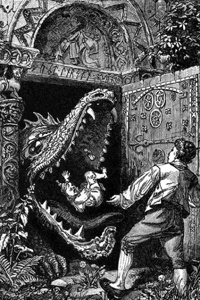 A series of solo table-top RPG sessions set in a bog-standard fantasy setting with humans, elves, dwarves, halflings, and lots and lots of monsters. Hopefully for our adventurers, lots of treasure too.

The adventurer Alhwald Tillyworth and the elf cleric Lyndis Hersandoral are on a fantasy adventure to become wealthy and powerful. Nothing more or less than that. Alhwald was the third child in his family. His father was a musician and could not afford to look after him so as a child he lived with some nomads.

As a young adult, he left these nomads and moved to a small town hoping to achieve his ambitions of wealth and comfort. He can be a bit greedy because of his ambitions.

Lyndis was the third child in her family. Her father was a mercenary and Lyndis wants to get experience on her own to follow his footsteps. When she was a child of 8 she got lost in the wilderness and she lost her consciousness while being pursued by Kobolds.

When she was out she saw Kalmera the Goddess of Miracles and when she woke up her wounds were gone and she was in an area of the wilderness she was familiar with and the Kobolds were nowhere to be found.