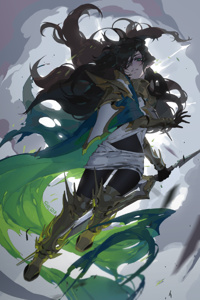 Everyone is a Superhero! Apart from me

Enjoying the story? How about joining my Discord channel!

Whenever there is an energy imbalance between the Soul Realm and the Human Realm, the Universe takes upon itself to correct this imbalance. However, this process takes hours, maybe days, enough to form a Soul Rift between the realms. Soul Monsters materialize within these rifts and spawn in the Human Realms until the energy balance is restored. Bound by the rift, these monsters wander around within a fixed space, never traveling across the boundaries. Brave adventurers scour unstable areas for these monsters and slay them to keep the soul energy before the Universe can claim them; thus, advance their power level and flair progression.

As all matter in the Universe exude specific energy wavelengths, humans might also unintentionally create energy imbalances. However, as human-made energy are not particularly powerful but consistently perpetual, they only spawn small creatures called Soulbound Companions that remain on the Human Realm until their soulbound human perishes. These companions are normally harmless and only resonate with specific wavelengths, which means a human may only have one companion throughout their lives, or in some cases, none.

Abstract of "Of Soul and Mind: A Metaphysics of the Duality of Man and the Universe"

Father used to tell me that taking a full punch of a Cragfist Ogre is the most injurious thing in the world. And I just took three such punches.

I groan as my back slams against a tree trunk. I fall on my stomach, blood dripping from my nose as I stagger back on my feet. My vision is so blurry that the stone-shaped fist of the ogre from afar blends into the landscape like a lurching boulder above the pine-colored grass.

"C'mon sugar. Get up!" My blue-skinned, rabbit-eared SC—Alleria—swerves around in front of me as she yells. "On your feet. Hush hush!"

I clench the nunchaku on my hand. My throat is far too sore to use my Sound Flair, and the foul stench emitting from the monster has clogged my sense of smell.

Its skin is as thick as platinum armor. I don't know how many times I've pounded on the ogre with my nunchaku, but my attempt left a single crack the size of a worm on its skin. I've used up all my reserves to imbue my nunchaku with my Epic skill Soundwave Infusion, but I took a Cragfist as soon as I peeled off the ogre's chest skin. Now I've lost the proximity needed to finish off my opponent and have no trick left up my sleeves.

It was a mistake picking a fight against a Soulbound past my level while I'm out of Flair reserves.

"Things aren't looking swell for you, honey." Alleria flashes our main stats in front of my eyes.

The small equipment menu in the corner reads:

I wave away the stat menu and focus on the juggernaut of a monster in front of me. The gray ogre twice my size has a protracted wound stretching from its square head down to its hairy nipple, its breathing ragged. With my baseline attack, I only need two hits to send it sprawling.

But it only needs one.

"Hey hot stuff, know your limit." Alleria circles around my nunchaku, her voice concerned. "Let's step outside of the boundaries and call it a day."

I wipe the blood off my nose and lips, then swivel my nunchaku as I take a defensive stance. The monster hurls its lumbering body forwards, attempt to launch towards me. Luckily, ogres were never known for their speed.

"My goal is to take out three of these before Eugene arrives," I say. "Two isn't three."

"Two is more than enough, sugar."

"No!" I clench my fist. "My Promotion Exam is coming, and I can't fail it again. I've disappointed Father once."

"You've proven you can outlast these bad boys. There ain't anything more to show."

"I've proven nothing." I grit my teeth. "Without Father's ring, I wouldn't have stood right now. All the more to prove."

"Sugar, I love your determination, but kinda hate your judgment capacity—to your left!"

I don't even know when the ogre has closed the distance, but when I realize it, a cross punch is already on its way to my face. I barely duck in time. The sound of rock slamming on wood rings out, followed by that of wood chips splattering on the ground. I roll to the side and resume my stance. The creature's bouldered fist is stuck inside the tree trunk, and it growls as it attempts to jerk its arm out.

This is my chance.

I charge forward. I don't think I can jump high enough to hit the scar on its head anymore, so I aim for the chest. If I'm lucky, my Nunchaku Expertise can give me a critical hit and finish it off.

Another fight where you have a clear out. Don't screw it up again, Melodi.

My nunchaku hits the thick skin on the ogre’s shoulder and a clanking sound resounds. Its Cragskin blocks the bulk of my strike, and I barely sway it off-balance.

The ogre roars, and the birds from the faraway trees fly off. Wide-eyed, I scramble to get away from the creature. I know what's coming.

The creature swings its entire upper body and uproots a small tree from the ground. It hurls the tree flying towards me like a Techno clan's missile propeller. I jump to the side, expecting impact. I don't know if the ogre missed or the Agility boost from my Socenian Light Infantry Boot helped, but I didn't feel the imminent pain of defeat followed by my consciousness drifting away.

Grass and soil splash on my face and tumble in the air as the ogre jump past them, swinging wide for another cross punch. The fist misses me by a hair. I swivel my nunchaku and hit its cheek with a thump, bloodied its face with oozing, snot-colored blood.

I jump up, bellowing as I swing my nunchaku. To my surprise, the creature refocuses in under a second. It tosses a punch with tremendous force. There's no turning back. I'm already in the air.

Either my hit lands, or the ogre's.

I can't see my target. My mouth tastes like dirt. My head swirls and spins.

Father used to tell me that one should never close their eyes while lunging in for a strike. I seal my eyes shut.

A single slashing sound reverberates, followed by a thunderous thud as my belly hits the ground. I don't know if the thud is mine or the ogre's, but I don't feel any pain despite the awkward landing on my knees.

I'm still conscious. Did I win?

I force my eyes open and see a pair of feet walking towards me along with a sword dragged across the ground, snot-like liquid dribbling down its blade. A shrill voice rings outs from who I assume to be that person's SC. "Don't drag your sword like that. Have some self-respect, you idiot! If only I have human hands to smack you right now. . ."

I turn over on my back and look up at the man staring down at me. Foxy-red hair, burning irises, freckles across his straight nose, and a shit-eating grin plastered all over his face.

I'm definitely not thinking straight, because right now, that shit-eating grin of his is kind of cute.

Some people wear a smile. This guy is the smile. And a dazzling one at that.

"Eugene?" I speak up, barely able to hear my own voice.

"Saved your life. Again." He rests his knee on the ground and peers at me.

"Are you sure about that? Because it sure didn't look like it. It looks more like I just saved your ass from getting knocked out by some stat-farming hub. You better start kissing the land I walk on and pay tribute at my altar."

Why does a good-looking guy like him have to be so obnoxious? I bet he isn't even good-looking and I just have a skewed taste in men. He's the only one here around my age I got to get around since birth. If Captain Azra were ten years younger, I wouldn't even care about this jackass.

Melodi, don't be mean. He's not that bad. Sure, he's only a tad crude, a tad inconsiderate, a tad impolite, a tad lazy, a tad annoying, a tad arrogant, a tad self-centered, a tad insensitive, a tad hasty, a tad rowdy, a tad. . .

I collapse to the ground; white light fogs my vision by the seconds. I feel Eugene's hand on my cheek as he asks, "Mel. C'mon, dude, even I don't sleep in this late."

"Give her some health potion, man." Lek's voice echoes from my left.

"Why would I bring any potion with me? I thought we were going for a friendly spar, not jumping random ogres."

"You bring potion with you at all times, dude. That's protocol."

"Screw the protocol. I was running late, okay? The protocol said you gotta hold your piss during field training too. You wanna wring your wizzie for an entire day, bro? I'm not gonna risk my bladder bursting."

Stay awake! Stay awake! I can't faint in front of this clown. It's going to be so embarrassing—

I'm pretty sure I'm about to faint.

Support "Everyone is a Superhero! Apart from me"

PayPal
Patreon
Whose POV do you like more at the moment?
Previous Chapter Fiction Index Next Chapter
About the author

Mel's voice is very different from Eugene's, which is nice. Anyway, I like you're formatting. Can I steal it? Lol.

About the color coding in the stats, there's surely a reason behind it. It would be nice if it will be tackled so the color difference will make sense for us, the readers.

For skills, the color goes from Common to Rare to Epic to Legendary to Mythic. For Type of Flair, it's dependent on the main elements of nature: Fire, Water, Air, Nature, Psychic etc.

Nice. It would probably be better to put it in an author's note after the chapter to make it more visible for other readers.

Whos the girl in the cover?

The original art is from Shen Huang. In my novel, the girl will be introduced later on!

Hey, I love the style, works perfectly for this setting!

that remain on the Human Realm until their soulbound human persist.

If Captain Azra is ten years younger, I won't even care about this jackass.

Thanks for al lyour comments throughout!

missed a capitalizion. I gotchu bro

For the love of all the gods, pick a tense and stick to it. Shifting from past to present and back at random is a sin against literacy.