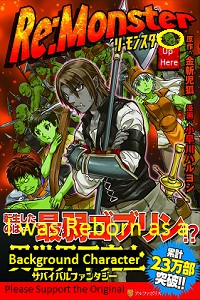 All around me the Goblins of my generation have gotten stronger and faster over the past few days, even me. I put it down to the intense training regime we’re undertaking.

That damn Goburou is too amazing.

Even most of the older goblins look up to him, full of fear and awe. It’s like he’s truly become the reliable leader of our little community and with the results and his astounding growth who could blame them.

The training session today was short but the individual spar went on longer due to the marked improvement in the endurance and technique of us Goblins. We’re still no match for Gobumi (to fast) or Gobukichi (to strong) and thankfully Goburou doesn’t assault us every day.

So it’s nice to see the improvement.

While it’s not official the general consensus seems to be you can only leave that days training if you win a spar. Some of the Goblins that won earlier are already coming back from a successful hunt.

I was watching from the side lines, waiting for my turn, when a badly wounded Goblin staggered in. He was bleeding from several small cuts on his body but had a massive grin plastered on his face.

When he made it in far enough he suddenly shouted.

He held his arms a loft and we all saw the characteristic sleek shiny scales of a Night Viper as he presented his trophy. The match stopped amidst hushed whispers as Goburou took the dead snake from him by the head and checked the Goblins wounds. Satisfied there was nothing serious and that he wasn’t poisoned he ripped the head off and handed the Goblin back the snake’s body.

He didn’t say anything just watched the teary Goblin devour the snake, a proud look on his face.

Unfortunately this must have motivated him because he jumped straight at us who were left and gave us some personal coaching. Returning Goblins were added in as they appeared. It was his complete victory: 38 straight wins.

Afterwards he singled out one of the other Goblins.

It was Gobue, who we relied on before; a dependable big sis, she seems to be coping better than some of the males with this Spartan training. They equipped her in old armour and gave her some spare weapons.

She was also loaded with a large backpack and a small field pack.

She has quite the fan base.

I scrapped myself off the ground in time to go out and bag myself another Armoured Tanuki and two Horned Rabbits. I got back in time to see Gobue lugging a overflowing backpack into the cave.

Seems they had a very successful day.

Another couple of Goblins came back with Night Vipers and a group even brought back a Seven Coloured Bat.

When I heard a couple of the Goblins bragging about their strength I had a bad premonition and made sure to steer clear. It came true. I said a quick prayer as the screams of the victims of the re-education and discipline session ran through the cave. It’s better to keep your head down in these sorts of circumstances.

I split an Armoured Tanuki with Gobujii while I asked him more about this world.

What really fascinates me is magic, it's another world romance, but he couldn’t really tell me too much. Sometimes a Goblin is born with the ability to use magic but it’s very rare, even rarer than a Kobold mage apparently.

Initially it’s not something that can be taught. I didn't understand what he meant.

I had thought that with this weak body of mine maybe I was better suited to being a backline caster, thoughts of slinging mighty spells and decimating armies filled my dreams.

The rain kept us indoors today but we had enough food stockpiled to keep us fed for a few days so Goburou declared we would be holding a tournament.

So began the Rainy-day Ranking Round Robin.

Presided over by the Hobgoblin himself. Sometimes it was one on one, sometimes it was a small group and sometimes it was winner stays on either way by the end of it we all had a rough idea of everyone’s strength and although the top four spots were pretty obvious, Gobue has gotten stronger while hunting with them, I was just proud of my own small accomplishment.

I’m at least not dead last.

I wonder if all my time eating bugs stunted my growth.

It was a close match but my last ditch tenacity and desire to win pushed me slightly above my opponent. I was too tired to continue though and lost the next match very quickly. I’ll have to put in the effort now to maintain my place in the peaking order.

Because after our rankings were established we were sat down and were given a very comprehensive explanation of hierarchy and the new changes it would bring to the den.

Goburous capability never ceases to surprise me, or Gobujii either for that matter.

Also instead of Boss or Chief he has decided to go by Colonel.

Gobukichi is the Lieutenant Colonel, Gobumi is the Major, while Gobue is to be the Captain. The fifth ranked is Sergeant. The squad leading Lance Corporals have yet to be decided so the rest of us are just common soldiers (Privates) at the moment. Does this world have these sorts of things??

I was distracted in my hunt by a large plume of smoke rising from the forest but my attention was too focused on my current advisory to go investigate.

In my momentary distraction the Night Viper I had cornered lunged at me fangs baring.

I had just enough time to twirl my stick entangling it and flicking it off to the side. It hit the ground with a dull thud but was dazed long enough for me to close the distance and bring my stick down on its skull.

With a satisfying crack I backed off, still alert.

After a few guarded moments I relaxed. Most of the training we receive focuses on being prepared and being able to fight defensively.

If there had been more than one opponent in hiding it could have used my moment of triumph to strike, probably killing me without me knowing it. I followed advice we had previously been given and feeling safe I drove my horn through the serpents brain just to be sure.

If I didn’t aim carefully I could puncture its venom glands and taint the meat, we had been told to bring the dead snake back to base if we weren’t sure.

Just for peace of mind I started eating it from the tail down. The skin was a little chewy but the flesh had an outstanding texture. Looking back I can no longer understand the allure of those grubs.

I wanted to eat more but not wanting to chance my luck I made do with some other prey.

Tonight when we sat around listening to Gobue, this time, recount her day I felt like I could finally understand and empathise with their struggles.

Before when I listened I felt disconnected for the community.

I had put everything I had into throwing that last punch but he took it so easily. Seems before I wasn’t putting my hips into it properly but that last one felt stronger, more powerful. The Colonel gave me a few pointers to correct my weakness but his methods are too extreme, my muscles ache and my lungs are on fire.

I’m not the only one he ‘helps’ but most of us don’t need it.

Compared to before no one has died on a hunt in a while and even if they come back injure it’s generally minor and rarely life threatening.

After catching another Armoured Tanuki and pinning it a tree trunk using my short sword I turned it into a punching bag. Its softer shelled underbelly and generous fatty meat make an excellent cushiony material to throw my fists against.
I lowered it down to practice some kicks as well.

By the time I was exhausted my tasty meal had got a bit wrecked but don’t get me wrong I still ate heartily. It’s just the presentation was a little lacking. Even as a Goblin aesthetics matter.

I don’t know what happened today but when he got back you could tell something was different. Maybe his aura or the air of authority he exuded.

The glint in his eye told me he had something planned.