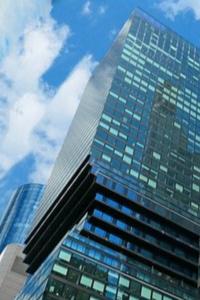 Humanity has survived on Earth thanks to the Towers created by the AI council, sheltering humanity from the damage done to the earth from the war.  To help humanity through the idea of living in upgraded caves, it created a method to digitize the human concious, allowing a user to enter a completely digitized world.

Tyler, just hitting the required age to safely digitize into his local Tower digital world, is in a race to establish his trading company head office.  With HYTOMA running for over 150 years, competition is fierce to buy property against other trading guilds, and the richer, more powerful raiding guilds.

He could imagine that in his excitement that he would run into a Wanderer, a human that snubs their nose at the Towers, and spend their time wandering the ruined planet.  Surviving by scrounging up old PC hard drives, and selling them back to the AI Council, allowing AI to add lost information to the Tower Network, and impoving the digital world.

Hang on for a ride, as Tyler discovers he was given a hidden class by the ruling AI entity, slowly rolling through a digital world on a rickety cart.  Will this Traveling Shop Keeper survive dragons, and lead Humanity out from the Towers, into a brand new world built by Articifical Intellegence?

Note:  I am a new writer with difficulty getting words from my head to sheet, so edits will be frequent.  I do not have an editor, if you are interested, I am more than willing to discuss options for your involvement.

Got to love the "put upon" MC

It's a good start to a GameLit VRMMO story.

Bit of AI flair in all the right places, great world building, decent VRMMO world building, interesting tech/magic systems, and the MC is more the put upon guy getting dragged along by the story.

Like most everything this last year the seven month gap between chapter 16 and 17 looked like IRL got in the way for an undeclared hiatus/drop.

Glad the story isn't done yet.

An intriguing journey towards a walk through chaos

It's a fun world building start. Sadly as of chapter 16 we do not have anything but a "start" the first bits of the party have been introduced and the protagonists role as a key to others plans is well cemented.

so with that said I'm going to start talking content and as it's all a starting point, I can either say everything I'm about to say is a spoiler for what is released so far or could just be classified as basic premise of the story.
But if all you want to know is should you read it. I'd say yes it was a lovely read. Give it a go hopefully it will be continued and not stuck eternally in hiatus but if it is I'd still say what's there is worth an inquisitive look.

but from here on out I'm gonna talk about the premise so if you want to go in without spoilers go read it and come back.

[it's a world set in a post-apocalyptic/war world. And the bunkers that survived are connected via a "Matrix/MMO" that each have their own servers per "Tower"(bunker) each server has grown differently in progression depending on the player base.

There are AI groups. The AI have reached True intelligence, and have had quite some time to improve since then. And these AI groups have fallen into an overseer shadow political debate over what to do with humanity:

let them out of the bunkers now that the earth is closing back in on habitable, or keep them as they are since they seem more peaceful and content as they are under AI supervision than there history books ever report them being, why change that, why risk it, why should they give up there control?

the protagonist has been chosen to beta test how other "towers" regions will react to the fact that diffent towers have evolved there knowledge and tech trees in completely different manners whilst in the same video game.

Will they find a balance and work through trade to come to a peaceful unity, or divulge into war.

Do those fighting to free humanity care about the results of the test or only care about providing humanity with a way to free itself and the knowledge on how to survive afterwards?

Do those who want to keep humanity under tower control care about the tests results?

Should the test be ended before it's truly underway to stop a probable civil war between the AI groups from having a "cassus belli" being made through this experiment?

The story is set to follow our newly entered Traveling Shop keeper and his mercenary band of contract players one of which seems to be an AI that spends its time when in the real world as a roomba. Thus teaching us that players does not mean humans but simply an intelligence using its time play in the game world and interact with each other in an understanble format.

we also learn that AI are perscribed a race on creation where human players get to pick(possibly purchase?) there's. so many of the less preferred races in any server have a higher likelihood of being AI randomly thrust into the  races roll than humans picking them though not a impossibility. ] overall it's a interesting premise I'd love to here more about both In the real world, the game and the world at large. It's a well made structured setting that establishes it self remarkably well in an enjoyable manner.