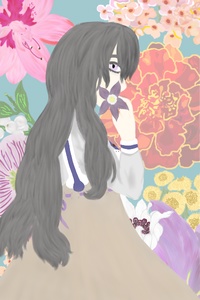 Think. How to get everyone out of this safely? Turn back time and warn Shark? No, that wouldn’t stop the Ghurians from coming to the village in the first place. It was evident that both sides in the war had become desperate enough to try hunting down the elusive, possibly eradicated time magic. One option, then, was to convince this Ghurian that the best move was to leave quietly without conflict.

“Who sent you?” Dorothea asked, trying to stall for time.

“No games,” Johanna snapped. “You come with me and join us or you die.” She grinned again. “Them’s orders.”

Orders. What would happen, then, if those orders were to be confused, twisted with possibility or threat? Had to be careful. “So the Ghurian army kills civilians in neutral territory without hesitation, do they?” Dorothea asked in a conversational tone.

The grin morphed instantly into a frown, and Johanna tilted her chin up. “You’re lucky I was told not to kill you on sight, you know. I don’t like your type in the first place.”

Told not to? So more Ghurians either suspected or knew that she and her Juncture magic were here. “Oh my! What type is that?” Dorothea asked, feigning shock.

“You’re trying to steer me off the subject. Stop it. It’s not pleasing at all.”

“I’ve no idea what you’re referring to.”

Dorothea smiled. “My type is far too dumb and innocent to understand what you’re talking about.”

“Okay. I’m done. Starting now, I’m done. Time to destroy this village and everyone in it all because you’re being such a —”

“There are Sacerian soldiers on their way to this very location right now,” Dorothea stated, and Johanna jumped and hesitated, flustered. Now to try and wear her down just a little more. If only she wouldn’t call the lie, please, please, let her not call the lie this time…

“I travelled back in time and asked them to come at this very moment. They’ll be here quite soon.” Dorothea folded her hands and forced herself not to tremble with fear.

Johanna bent over her, and Dorothea shivered involuntarily from her looming presence. “Hm. Lying.”

“Testing me?” Dorothea could barely breathe, but she glared upwards. “I could always use my power to do more damage than that. Like perhaps preventing your birth? You never know with us types.”

“Hmmm. Ahaha… I see now.” Johanna straightened back to her cowing full height. “Wow. I hate you so much.”

“So your feelings towards me haven’t changed at all.”

Johanna clicked her tongue. “I’m an experienced soldier. Seriously, what’s to stop me from slaughtering you here and now? It would be as simple as wiggling my toe.”

Now she was the one bluffing. There was no way Johanna could say that and mean it with both Shark and Cerid flanking Dorothea. “And it’s worth the risk to you? The second I see you move anywhere but straight back where you came from, I do damage you won’t be able to prevent. It’s your choice,” Dorothea said evenly.

“Ahaha…” The laugh had changed. Rather than scaling up in pitch with a backwards glee as it progressed, it now fell downwards in defeat. “Hm… Mm. Okay. So, today, I’ll leave. But whatever you do, no matter what you reverse or where you go or whatever, more soldiers will come here. You’re just one person. You won’t be able to stop everything on your own every single time.”

Dorothea pursed her lips and chose to say nothing. It was a painfully true statement, but retorting now wouldn’t be the best idea.

Johanna took a step backward and, in clear petty revenge, planted a sharp kick to Dorothea’s knee, sending her sprawling onto the snow.

“Just let her go!” she ordered as Shark moved to pursue. “We’ve got more important things to worry about now.” Nothing felt broken, but she limped some when she stood and tried a few steps. Still, she counted herself lucky to have escaped with only this much.

Shark seemed to agree. “You have to be more careful!” ze exclaimed as ze put an arm around her for support. “You can’t heal yourself like you can others!”

“I’m sorry. But we’re all alright. That’s what matters.”

Shark let out a heavy exhale and let her extricate herself from zir. “Sorry. I’m on edge.” Ze smiled back when Dorothea offered an understanding smile of her own.

“You cannot heal yourself?” Cerid asked, looking between them.

“Again, it’s not important. We should hurry. For today, there likely won’t be any more attacks. I hope. We need to get to Sacer and get aid right now.” Dorothea paused. “Hey, Shark? The Ghurians that you’ve met before, what were they like?”

“Ah.” She looked to Cerid, and he shrugged. It shouldn’t have surprised her. Like Johanna had said, the state of the world was one in which those not forsaking battle were drawn into it. That law guided in turn how people would inevitably view their fellow human beings. Hm. Now wasn’t the time to reflect on it.

To reach Sacer, they would have to go all the way down the mountain path and travel eastward; Ghuria would be found to the west. For Cerid’s fallen comrades to be revived, they would have to take a slight westward detour and get precariously close to the border between Sacer and Ghuria. That, however, would wait until contact was established in Sacer. They could very well be waltzing into a trap if they approached the bodies (if they were even still there) carelessly, and Dorothea didn’t want to bet on Cerid’s questionable competency, Shark’s rustiness, and her own total lack of combat experience to get them out of trouble should the need arise.

It would take mere hours to reach their destination in Sacer. For ease of trading and so as not to deter incoming refugees and wanderers, the village of Equin had been constructed very close to the border between Sacer and Sirpo. The distance from Ghuria was frankly due to their lack of offerings in terms of trade, though a path had also been constructed to help guide Ghurians from their territory to the neutral village. Here and now, Dorothea was thankful for the thinking of those early builders. The faster she could ingratiate herself enough to secure a small sort of military alliance with the Sacerians, the better it would be for the people of Sirpo. She still wasn’t keen on owing them any favors, but the Ghurians’ blatant threats hadn’t offered much of a choice.

After less than an hour of walking through Sacerian lands, Dorothea was a complete mess. Sweat beaded profusely on her upper lip; her thighs felt seared from rubbing together, and her shirt stuck, slicked, to her back and armpits. She tied her jacket around her waist, and Shark snickered at the dampness of sweat forming ink blot shapes on her back.

“You act as if you look any better than I do,” Dorothea muttered.

“Not once did I claim not to be suffering right now.”

“I have always thought it easier to deal with cold than heat,” Cerid supplied. “You may layer against the cold but are permitted only to strip down so far against the heat.”

“I take that as a challenge,” Shark declared.

After another hour and some, a structure came into sight. “Welcome to Springen,” Cerid said. “The largest settlement in Sacer and home to several of its elite family lines.”

“Elite, huh? Sounds fancy,” Dorothea noted, nervous now that they were so close with her being the only one totally unfamiliar with what they were stepping into. She stopped and gave Cerid a questioning glance when he held up a finger, signalling them to wait. That was when she heard voices, two distinct ones saying… well, strange words.