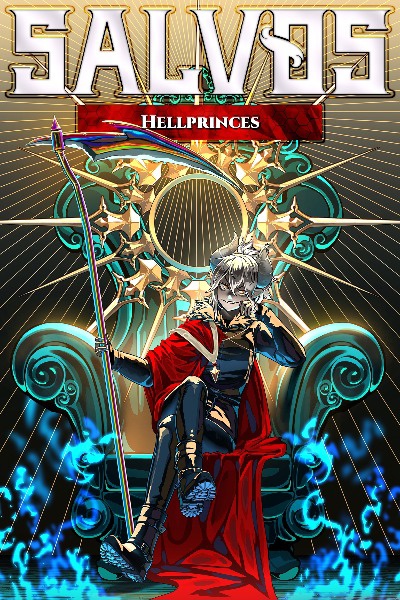 The word rang out of Saffron’s mouth. The noble woman stumbled back, pointing a shaky finger at me. Then she spun around, ready to burst out into the hallway.

I narrowed my eyes.

In an instant, I was next to her. I raised a hand out, seeing my claws retract— my skin turning to a more olive or peach-like color, less pale, less silver. Already transformed back into a Human, I grabbed Saffron and shoved her back into the room.

She was wrapped in blue flaming chains, including her mouth so that she couldn’t speak. The door silently closed softly behind me as a few students of Mavos Academy poked their heads out of the neighboring rooms.

I scratched the back of my head as they looked over at me. I glanced around, wearing a confused face.

“Did someone say something? Haha, I could’ve sworn someone shouted something!”

I shrugged, nonchalantly returning to the room. There were murmurs— annoyed mutterings about their study sessions being interrupted.

“Must’ve been a prank, right?”

I opened the door and hurriedly slammed it shut. I wiped the beads of sweat forming on my forehead, sighing in relief.

I stared at Saffron, wriggling on the ground, bound and gagged. I placed my hands on my hips.

The pink-haired woman glared up at me as I ran a hand over the room’s walls. There were runes inscribed onto it— magic that would muffle sound from seeping out, and prevent outsiders from peeking it.

“Look, it’s a misunderstanding. I’ll let you speak if you promise not to try anything, alright? Then we can talk our way through this.”

She stared at me, silent. Obviously. She couldn’t speak. I decided that it couldn’t hurt to at least let her talk, so we could resolve this without drawing blood.

I tapped a finger on the bands of blue flames covering her mouth. They didn’t burn her. I made sure to make it so it wasn’t the kind of flames that burnt… somehow.

“Unhand me you Demon!”

Saffron snapped, speaking over me. A red aura overcame her. It was a familiar one. I saw it once before, back when that Vampire bandit boss commanded her followers to attack me.

And now, this same magic— or Skill— was being used against me. I stepped back, frowning. I felt a tugging at the back of my head. My sympathy for Saffron and her situation. I hadn’t wanted this to happen. Yet, the feeling grew stronger than before. Before it was quelled.

A glint drew my eye. My Ring of Lesser Curse Protection shone. And a Skill— no, a Title Skill— activated. [General Curse Resistance]. That feeling returned to the back of my head. My brows snapped together as Saffron blinked.

“Why isn’t my [Vampiric Essence] working?”

So, she was a Vampire. I had my suspicions, but this just confirmed it. I leaned forward, and she drew back.

“That won’t work on me. I just want to talk. Clear this up. Please?”

“There is nothing to clear up. I saw your Subspecies. I know what you are. You are the enemy of the Human race. Regnorex is at the gates— and to think I thought of you as my friend!”

I sputtered, waving my hands in the air.

“If we weren’t friends, I’d have just killed you and gotten this over with!”

Her brows furrowed. Then her eyes widened.

“H-how many people have you killed?”

I grabbed her by her shoulders before she could say anything else. I took a deep breath, trying my best to explain.

“I am a Demon, yes. But I am not a wild Demon or a bad Demon like Belzu who’s ravaging Nixa. I am just a Demon. Like you are a Human… um, Vampire? However that works! I am Salvos. Even if I’m a Demon, I’m the same Salvos you’ve known the whole time!”

Saffron eyed me. She shook her head, completely ignoring what I said.

“Your kind is responsible for bringing death and destruction unrivaled to the Mortal Realm. Your ruler, Regnorex, slayed our guardian and protector, Alexander the Immortal King. His armies slaughtered thousands of my ancestors who fought valiantly to save this plane. Even right now, there is a Primeval Demon out there, killing tens of thousands of innocent lives, putting my family’s lives in danger. Tell me, Salvos the liar—”

I pursed my lips at the title she gave me. But I didn’t bother responding to that now. I was trying to defuse the situation, not make it worse.

“With all these facts in place, why should I trust you? Why should I give a Demon the benefit of the doubt?”

“Because I haven’t killed you.”

The noble woman paused. And before she could unleash another tirade on me, I spoke simply.

I stared at her. She wore a dubious— even mistrusting— look. One which wouldn’t be convinced by anything I said.

“Before I enrolled into Mavos Academy, they made me take a vow. The Headmaster himself carried out this ritual. And I had to swear that I am not an agent for any Species or organization that threatens to undermine Humankind. I passed the test. I am standing here right now, a student of Mavos Academy.”

I tapped a finger on my badge. The proof that I was in the School of Aspiring Elites.

“If you don’t believe me, will you not believe the facts? The truth? Use your logic, Saffron. Don’t you Humans pride yourself in being rational creatures?”

I could see the tension gripping Saffron abating— albeit only slightly. She hesitated, and I continued.

“I was the one who killed Lucerna, that Greater Demon rampaging through Falisfield. I was the one who first reported about Belzu to the Adventurers Guild. I have killed over a hundred [Cultists], and I have saved your life once before. I know you perceive the Netherworld as a monolith— every Demon there bow down and worship this… dumb Demon King. But that can’t be further from the truth!”

I remembered all the wild Demons— and not just them, but the others. Those who had been with Haec. Even that horned Demon that tried to disguise itself in a veil of intelligence, but was no less wild than the other wild Demons.

None of them had served Regnorex. I only encountered a handful of Demons who did. Those who didn’t far outnumbered the ones who were under the Demon King. It was not what Humans thought of it at all.

“I do not serve anyone but myself, Saffron. And I hold no ill will to Humankind, nor do I wish to harm you. Just think about it for a moment, alright?”

Saffron shifted as I finished. She averted her gaze, staying silent for a few moments. I waited for what she had to say— I hoped it wasn’t some stupid indictment against me because of my Species. Thankfully, her rational side won out.

I cocked my head. Then I beamed.

“You mean you believe me?”

“I… believe the facts of the situation. Is that enough for you to free me?”

I crossed my arms, stepping back.

“I need you to promise me you won’t tell anyone.”

Saffron still avoided my gaze, but she mumbled something.

“I can’t hear you, Saffron. Promise me you won’t tell anyone!”

The noble woman looked up. She spoke through gritted teeth.

“I swear, by the honor of the Merryster family and my lineage as a Vampire, that I will not tell anyone that you are a Demon.”

I raised a brow. I wasn’t sure if I believed that. But it’d have to do for now. I couldn’t keep her chained up forever, and I especially didn’t want to kill her.

I let the chains dissipate as Saffron made her demand. She sprawled on the ground, groaning. She rubbed her shoulders, sore from being tightly chained up. I wasn’t able to treat her with the utmost care earlier, considering I was in a panic.

She drew herself to her feet, and I tilted my head.

“Where are you going?”

She harrumphed as she spoke. I stood to the side, letting her march off back to her bedchamber.

The pink-haired woman paused at the doorway. She glanced back at me, then she scowled.

And she slammed it shut.