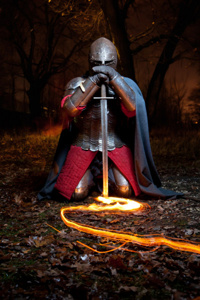 Secrets once thought lost are coming to light...

Orin, a young thief turned mercenary, is returning to his home for the first time in four years. Orin wants nothing more than to reconnect with his family and settle down in the city he loves, but fate is fickle and has another destiny in mind for the swordsman.

Now bound to the Princess of the Realm in ways he doesn't fully understand, Orin finds himself thrust into the world of Nobility, where no one can be truly trusted and his friends are few and far between.

To ensure his survival, and that of the entire Kingdom, Orin must learn to harness the power of a Knight and work with the Princess Elora to protect those they both love, all while dealing with psychotic Knights, a mad King and Elora's own protectors.

Well, if nothing else, I'm sure it will be an adventure.

The Sword of Stars: Book one of the Knight and Smith Saga is now available on Amazon!

This is one of the ideas I've been working on for a while and wanted to see how far I can go with it.

There's nothing really original here, just something fun I wanted to explore a bit more.

Chapters will be posted once a week on Friday at five pm GMT.

Thank you for reading and I hope that you enjoy Knight and Smith!

I read at least a book a day plus web novels. This is as well written as almost anything I've read in the last year including professionally published authors. Solid characters, an interesting "magic" system and a world that doesn't feel like it would fit in my backyard. Highly recommended.

Best story In a while.

One of the best storys I read all year. Amazing writing, character, style everything. Unique story with non repetitive themes. IRL I've been on a creative slump. Nothing I read watched or played could get me out of it. And this did. It is worth the time to read and it is making out to be a book I actually remember months from now.

Good if you like drama, and a hero planned to save the day.

This review was simply inteded to like-minded people, hence please keep that in mind that this is subjective.

If you want to know the reason

In chapter 6, the MC and the princess managed to accomplish to what was unheard of even by masters, and managed to beat a trained knight after harnessing knight's power in mere seconds.. great.

Stupid and reckless decision made over and over again by the MC and the princess, and something always came up to save them.

So, if you come here to get a reasonable and thrilling storyline, this is might not be for you.

However, overall this story is still good if it suits your tastes.

Poor use of voice and sentence structure. A real struggle to read. My biggest problems were the inconsistent tone of the main character (how is the main character a grizzled world worn mercenary and expert swordsman at 18), the lack of focus/rambling in the paragraphs, and how the sentence structure was almost never varied. Just not very enjoyable.

Edit: dropped. I can't turn off my brain anymore, it just hurts too much.

The story is nice and captivating, at least. Despite the abundant flaws in other areas, it was what kept me attached. As chapters flowed, though, they were no longer enough. I found myself skimming through long, overly descriptive sections with no substance, and those made up over half of the latter chapters.

The style of writing is... Inconsistent. It is easygoing and to the point sometimes, while smothering, clunky and roundabout at others. There are also many repetitions in phrasing that make for poor composing. It shows the author's inexperience, though that is not a flaw in itself. Also, expect lots and lots of details. More is told about the scenery than about what's going on.

Characters are fine, but not great. Writing is, again, slightly inconsistent. While there is reason for character change in some cases, we might as well call the others bipolar. There is little fidelity to some character descriptions, and it feels like they're homonym, but completely different entities.

Now, for grammar... This story needs very heavy editing, if it is ever to be published outside of RR -- it has really, really bad grammar. I'm talking more than just misspelling. The author struggles constantly with homophones, with conjugation, plurals, apostrophes... Run-on sentences seem to be the norm, and the exceptions are paragraphs where the author throws punctuation around when they want dramatic pauses, as if someone wrote like Cristopher Walken talked. There is no definite tense. I'm not talking between paragraphs -- sentences will very often switch tense in the middle, sometimes with three or four switches from beginning to end. Some sentences are filled with redundancies, as if the author left placeholders and forgot to go back and delete... How does this pass as "perfect grammar" for so many people?

It could have been a good read, but it feels like a workout, and is just as strenuous as one.

Reviewed at: Book Two Synopsis, Poll Results and the Chapters are back up!

I picked this story up early on and haven't been able to stop reading! Great pacing, enjoyed the knight and Smith concept, and I am looking forward to learning more about the world and bonds.

The large chapter size made it easy to sink into the story. Really looking forward to book 2!

Stayed Up All Night Reading This

I'm a mainstream Fantasy reader that was introduced to this Royal Road after reading "Mother of Learning". "Knight and Smith" is the second webnovel I've finished (or fully caught up to), and it makes me very excited about what's to come if there are more gems like this. I was up all night reading this, and was caught up in one sitting.

So I've checked out a few other webnovels so far, and despite their interesting premises, I could not get past the amateurish writing. That was not a problem with "Knight and Smith". The prose was suprisingly prolific, and the writing sensible and clean. The POV switches are well done, and another another layer of complexity to the story. The swearing felt a little off at points, but overall, the writing is leaps and bounds beyond what I expected of a webnovel, and extremely immersive.

The basic premise is very appealing for me. I have a fondness for the orphan-with-dark-past-meets-princess trope, and the magic system caught my eye as well. Many aspects of "Knight and Smith" are built upon these enjoyable cliches, yet they're approached organically, and with the author's own twist. Yet by no means is this story an empty and hollow shell of tropes. The characters and worldbuilding is well developed, and just when you think you know what will happen next, the author will subvert all your expectations.

I've caught quite a few grammatical errors over the course of reading the series. They were mostly small things, such as using 'it's' instead of 'its'. However, they weren't so abundant that they impeded readability, and by no means do they suggest anything about the quality of the writing. Rather I was puzzled that there were these common mistakes, when the quality of the writing was so exemplary.

Now you may be curious at the 5/5. It's because the chapters are absolutely huge. I cannot believe the sheer amount of writing that the author churns out every week while maintaining great quality. I will not fault them for the occassional gramatical error as they've essentially written a short book in two months, and likely without an editor at that.

The characters are intelligent, capable, and surprisingly well developed for the fast pace of the story. They have believeable motives, and even the side characters feel like they have agency. Not much more to say here.

This has been a very enjoyable and satisfying read. The writing is vivid, the plot gripping and the worldbuilding intricate and enticing. I'm excited to see where this series goes.

Book1 is finished, I can stockpile chapters till the next one

The idea of merging two people for magical powers kinda cringe in my opinion. And the joining of Princess and Commoner is kinda cliche. And troubles that it causes.

Yet, I cannot say this was bad in any way, I've started with the hope of something interesting, by chapter 4 I was terrified of finishing on a cliffhanger.

The only problem I could notice is too many descriptions, it could've been reduced by 20% and would've done wonders for the pacing. Though it felt better after 15 or so chapters

Also, there are some pov switches, they are unexpectedly fell important, most time I'll want to skip them, but here I was glad for some of them.

More than Meets the Eye

This is one of a select few novels I truly enjoy and look forward to reading the next chapter of, namely because of It's style (a style I've seen other comments disproving of). I find myself intregued and drwn deeper into the wonderously crafted world through the verbose and rich sentences of the author. There are a ton of wonderful themes (themes? What are those?) in this book, namely the definition of good and evil, civilization vs. savagery, and commentary on social status (as well as a brilliant, brilliant, subversion of the princess and knight stereotype). This may not be the novel for you if you're in the market for wish fulfillment or quick and easy action, but if you want something more philisophical and deep, I could not recomend anything better.

Its awesome when you come accross a story, thats book quality - whats more when its engaging and twisting , the characters evolving and maturing, the chapters full long and satisfying.
If you are looking for one of thisquick power up - easy to follow stories, where you can guess then next hundret chapters, thats not for you.
But for intrigue and worldbuilding and the satisfaction of reading, its the story you are looking for.
Sorry thats not a story its a great quality book, one i would buy in a heartbeat.

Long story short -
An orphan, tunred mercenary, comes back home to settle down. Unbeknownst to him, a scheme starts to play out and finds himself in the midst of it. Slowly the dots connect, and we see our hero, is more than just a mercenary, a knight, a protector or a friend, but something more.

What more to say?
The plot is actually simple, guy save princess themed, but with a decent amount of twists and turns, that keeps you guessing - the characters are reflectant, and you can see visible growth and maturity.
There is a decent worldbulidng surrounding the myths and legends of the said world.
And i personaly love the commoner vs Nobility attitude the character has.