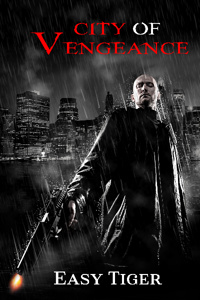 Sierra Rico is a legendary killer, trained from childhood to become the perfect assassin for South America's most ruthless drug lord. But after having his whole world ripped apart by a vengeful rival, Sierra is desperately trying to escape with his life. Now he is relentlessly being hunted by the drug cartel that raised him, as well as past adversaries, professional hitmen and an old nemesis who refuses to die until Sierra has suffered up to his last breath.

Kenji Kojima is a spoilt young heir to a worldwide Yakuza criminal empire, betrayed by his own jealous brother in a bloody rebellion to seize power. On the run and cast aside by the very men he was meant to one day lead, Kenji must shed his lazy playboy persona and become the warrior he needs to be in order to slay his traitorous brother and take back what was stolen from him.

Fido is a mysterious vigilante without a past or a home he remembers as his own. He has dedicated all facets of his life into hunting down a psychotic posse of killers who left him for dead. He kills without mercy, seeking not only vengeance, but also the answers as to why he was targeted.

In Panama City, Panama, a thriving metropolis brimming with corruption and on the brink of a massive international gang war, the fates of these three men will crash together in an epic tale of redemption, bloodshed and bullet-riddled vengeance.

Something special is brewing with this one

I stumbled across this last week while I was searching for a new action story to satisfy my cravings. I must say, this is quite a hidden gem. The concept is an interesting one and I look forward to seeing how the writer ties the various plot threads together.

The setting and diverse multicultural cast of characters is another strong point. Here we have a near-future city run on a drug economy. South American drug cartels, Japanese Yakuza, Russian gangsters, Haitian killers, an Irish mob, a Jamaican drug gang, and an Italian Mafia group all seem to be vying for control (Did I miss anyone?), and all of them are getting blown away left and right.

And then you have these interesting Guerrero characters, of whom the main character was forced to be one but now wants out. They are basically a group of warrior/mercenary types from the war-torn South American continent and each on of these guys seems like a one-man army. The first battle between two of them in chapter 2 was insane. I can only imagine what the rest will be like later on in the story.

The action is gloriously over-the-top, bloody and well-written. Plenty of gun-fu at play, and there's been a very high body-count already. Speaking of the body-count, the ways in which various thugs, killers and lowlives have already been dispatched are all quite creative and there is some great traces of humour littered throughout to break up all the carnage.

The characters are all colourful and carry distinctive quirks. The gang of Haitian killers are particularly hateful and menancing, and I very much look forward to seeing every last one of them meeting their end.

The pace starts out frantic, with multiple time jumps and action sequences but then quickly finds it's groove, introduces the relevant characters and goes about setting up what I can only assume will be a long-running and action-packed story to very the finish.

So far I am just enjoying the ride. I hope the writer keeps up the good work.

If you have not already started reading, get on it!