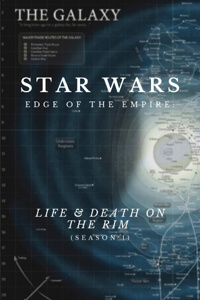 STAR WARS Edge of the Empire: Life & Death on the Rim (Season 1) 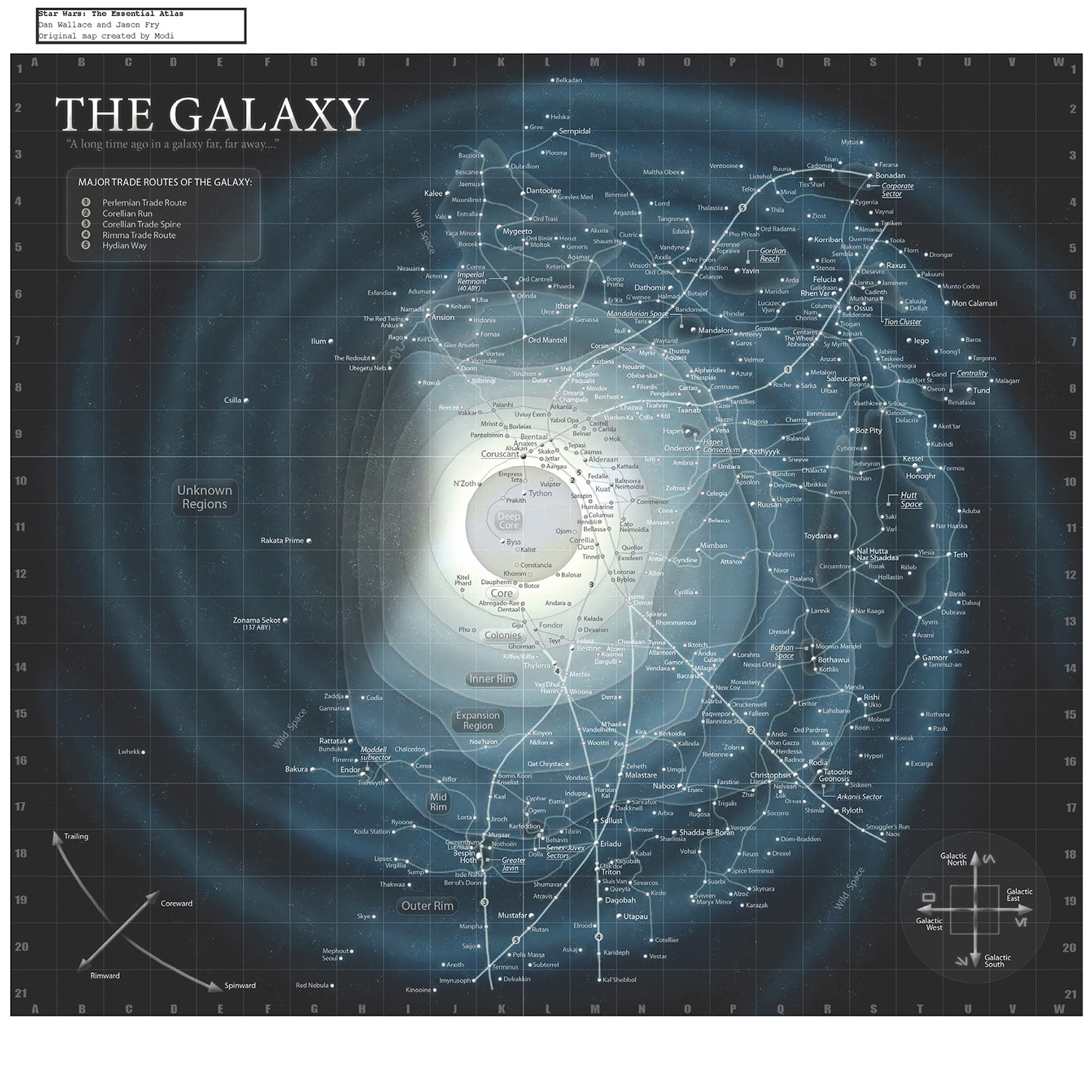 IN a few days we had made it to Rishi, a tropical blue world located in the Abrion sector, and the location where our mystery client was to be found. As we dropped out of hyperspace we noticed a speck in the distance that looked like a space station of some sort, orbiting the planet.

“What is that..” I wondered aloud.

Zeb, behind me, was fumbling with some sort of cube-like puzzle he’d picked up in a system previously to our acquaintance. “Not our mission,” he said, barely taking his attention away from it.

I nodded, hesitating for a moment, then pulled my attention back to the planet now filling most of the Scarlet’s forward viewport. It was time to make contact with the client.

I used the information given, and made a transmission.

Sighing, I prepared to repeat the message once more, hoping this wasn’t some sort of-

“Scarlet, please proceed to Craig’s Valley. It’s an alcove in the lowlands used mainly for pirates. There you will dock. Sending coordinates now. You will need to use the cover of being traders to go unnoticed. A contact in the area will inform you of my location."

After relaying the info to the ship's onboard speakers, Zeb plugging coordinates simultaneously, we began our descent from orbit.

We entered atmosphere shortly after and saw before us Craig's Valley, a pirate alcove built mostly of ship wreckage. As discomforting as the situation seemed, it wasn't too far from the ordinary when dealing with these types of things..

We set down, and decided to split up in an attempt in having an advantageous position should things go south. Aegeon and I left the Scarlet, closing and locking the bay doors behind us. Zeb, his three ‘droids, and Hector stayed aboard the Scarlet, ready to fly in guns blazing if and when we needed them. This way, the Scarlet wouldn't be boarded by potentially greedy pirates, and in the event we were double-crossed, backup would be on the way.

I told one of the leaders at the docking bay my companion Aegeon and I were looking to make a trade, and was directed inland to the Northeast to find a Troydarian male named Cug Lim. These docking bay thugs happened to be just that, the hired help, loading and unloading ships as traders came and went. We began hiking inland and came across a group of Mandalorians, one of them harassing a nearby merchant selling wares. My companion Aegeon yelled at them, threatening to teach them a lesson if they didn't stop, while I attempted to pacify the situation. Thankfully I was able to do so, then asking politely to be directed towards Cug Lim. Reluctantly, the apparent leader of the group said they happened to be on the way to see him themselves and offered to lead us there. We agreed. However, as we began following, one of their members walking nearby discreetly handed me a data chip, then hurrying to rejoin his group.

We found Cug in a somewhat abandoned area (selling weapons, wares, and many other things) and told him we wished to make trade. After a brief negotiation, he agreed to give us 40,000 credits for our Karrak Spice, as well as some assorted weapons requested by Hector for a negotiated 6,000 credits. I asked for a contact to purchase false credentials for the Estoc from and was told a man by the name of Gresk Linaz was the man for the job, and that he'd be available in a few days' time. Cug told me he’d contact me by comlink when Gresk was available.

We then made our way back to the alcove to open up the bay door and help unload the spice but were approached by a group of bounty hunters. They began asking about the Scarlet, eventually telling us they knew we had stolen it off Tatooine and that they had been paid to bring it back as well as kill us. I tried to tell them they were obviously mistaking our ship for another, but given the rarity of the ship, its ID number, and the fact that I may have slipped up about us having bacta which they knew was stolen, we quickly realized trying to charm our way out of the situation was futile. Signaling to our friends aboard the Estoc, who pointed the ventral-mounted Light-Ion Cannon directly at our aggressors, we then told the bounty hunters they'd be better off escaping while they still could. However, the group nearby, hired by Cug to help offload the spice, had managed to hear the conflict brewing and began shouting “Bounty Hunters!” and within moments, the group sent from Tatooine to hunt us was shot down where they stood. Apparently, bounty hunters were not very welcome on Rishi..

Relieved, we then continued to the Estoc where we loudly mentioned that our “droid” on board was thankfully there to use the onboard gun to intimidate our foe. The pirate thugs didn't seem to care much, assisting us in offloading the spice with no questions asked. After receiving payment, we went back aboard the ship, closing the boarding ramp behind us. I handed the data chip off to Zeb, who plugged it into a datapad and a message was played, telling us that Mr. G was waiting for us at the Drunken Orobird, just near where we'd met Cug moments ago. Aegeon and I made our way there, meeting him in the otherwise-empty cantina.

After making it clear he wasn't interested in any of the extra data we'd found on Hypori, this Mr. G and I agreed that we'd upload half the information upfront for half the payment, the remaining half when we knew he was good for it. He politely led us to a back room where he contacted his superior, a cloaked man who appeared by holo. We gave them the schematics of the ‘droid factory, and 250,000cr was transferred successfully to our account. The datapad’s screen shimmered, cutting out directly after completion. We were unable to complete the second half of the transaction. The signal had been hacked. We were force lead Mr. G to the Estoc. With the push of a button, the self-destruct mechanism was triggered.

We ran southwest from the Drunken Orobird, making our way back to the Scarlet, and as we did a small group of Mandalorians ambushed us from the North. I laid down suppressive fire as I took cover and commed the group members aboard the ship, telling them of the situation. Zeb fired up the Scarlet immediately and lifted off. Aegeon activated his Cortosis Shield and began walking boldly towards the three Mandalorians, taking the majority of the fire and giving me chance to take an aimed shot, dealing damage to one of the Mandos before Aegeon went in with his vibro-glaive, dodging and slashing strategically. Before we knew it, the Scarlet was screaming in, Hector firing the Light Ion Cannon and taking out one of the enemies. As Aegeon and I worked on handling the others, we saw one of the Mandos light up his jetpack and fly towards our ship, making it onto the opened boarding ramp, but before he could successfully attack with his flamethrower, Hector quickly gunned him down, and he fell backwards, flipping head over heels as he harmlessly fell towards the ground. I aimed my heavily-modded energy pistol at the last of the Mandalorians, and as Zeb began maneuvering the Estoc into a nearby clearing, I pulled the trigger; the energy bolt seared straight through the Mando's blaster rifle, rendering it useless and hitting him directly in the helmet.

As the stunned Mando began his retreat, Zeb set the Estoc down in a nearby clearing and we sprinted up the entry ramp, Mr. G with us. Zeb fired the ion thrusters, and the Scarlet Estoc rose quickly as we took a moment to take in the dangerously beautiful tropical world of Rishi, the sun just beginning to set as the Estoc raced into the clouds above.

Safe once more, we headed inside, closing the boarding ramp as we headed for atmosphere. It was time for a chat with the so-called Mr. G…

Bio: Creator of the written series and upcoming podcast:
"STAR WARS Edge of the Empire: Life and Death on the Rim"

Experience the galaxy of STAR WARS in a whole new way..
Jump into the shoes of Killik Faz as he navigates the galaxy as part of a mercenary crew..

Author of the upcoming novel "Tales of Shady Grove Episode I: A Wolf in Sheep's Clothing"