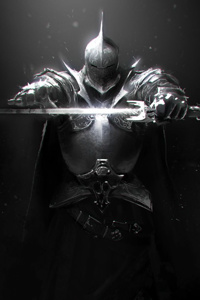 Screams of humans and the roars of beast can be heard everwhere around the city as the beast destroyed building after building revealing the humans hidden inside. The Defense wall was completly obliterated with corspses of Warriors and Magicians strewn all over the ground. The Noble Beast looked at the destruction with an uninterested expression as he slowly devoured The Master Warriors and Magicians corpses from the pile in front of him.

Meanwhile on the other gate, Edgar was charging at Joseph with a blade he had gotten from George, swinging the blade towards Josephs chest who managed to evade easily, grabbing Edgars wrist he gave the boy a hard punch to the face with the blade falling out of his hand.

Causing Edgar to fly back rolling on the ground, Edgar looked up towards Joseph with eyes filled with Malic as blood dripped down his nose, then before he knew it he passed out. George ran up to the fallen Edgar as he checked if he was alright.

Joseph looking down on the young boy yet again, snorted at his attempt for revenge.

"Is this all you got, boy" Joseph mocked as he walked over to the fallen blade, picking it up with his left hand, he assessed the jewels that were carved on to its hilt along with its intricate golden lines design. Looking closer Joseph seem to realize something.

"This is an Elfen Blade" Joseph said with shock looking towards the old man whos long hair covered his ears from sight.

"Are You Perhaps an Elf, Old Man?" Joseph asked menacingly.

George having heard Joseph statement froze momentarily before turning towards Joseph and denying any connection to the blade.

"I'ts just a blade I manage to come across on my voyages" George Explained whilst not forgetting to tend to the fallen Edgar, wiping away the blood dripping down his nose.

"Show me your ears then" Joseph demanded, gripping the blade in his hand strongly.

"I am but an old man please don't mind me" George suggested.

"Doesn't matter, If you tell me the location of the Elfen Treasury hidden in the Ortus, then I might let you go" Joseph declared.

"You Humans never seem to change, always wanting something that is not yours" George said coldly as his expression changed to one of ruthlessness.

Sensing this change, Joseph quickly drew his sword with his right hand, not forgetting to unleash the aura inside of him outwards. But before Joseph could make a move, the old man appeared right in front of his face like a ghost, grabbing the blade in his left hand and looking straight into his eyes causing fear to well up inside of him. Panicking Joseph quickly cut his swords horizontally towards the old man, but ended up hitting nothing. George reappeared behind Joseph with the blade in his hand as if it was childs play and proceeded to lightly kick him from the back which ended up thrusting Joseph towards a nearby building, destroying its outer walls.

George walked through the broken walls as he spotted Joseph laying on the ground of the rubble coughing up blood. He slowly walked towards him as Joseph began to push himself up and away from this demon that was after him.

"P-Please I..I.. didn't mean to offend you" Joseph pleaded with the Old Man that was making his way towards him menacingly.

"Did you know why you are still alive?" George asked. Joseph being caught off guard by this sudden question trembled.

"It's because I am not the one who should kill you" George said, answering his own question. Joseph seeing a ray of hope for his survival quickly kowtowed to show his thanks.

"Thank You For Your Mercy Great One" Joseph Bowed, making sure to show a face of adoration towards George.

"You are a Disgrace to the Great Protectors of your race" George Mocked.

George disgusted by Josephs behavior to save his own life quickly appeared before him, chopping his hands down on his neck and knocking him out. He then proceeded to pick up Edgars unconcious body and hid it inside one of the rooms of the broken house. He then casted a strange Cloaking Technique that hid Edgars prescense from other people and with that he went back outside knowing the loud sound would end up attracting the attention of some nearby Beast..

All the beast ravenously lunged towards the old man as soon as they spotted him, but he easily evaded each of their strikes with a lifeless expression on his face. George gently swiped the blade towards the relentless beast attacks as they were all easily split apart into many sections with their guts spilling out. A beast General on one of the houses witnessed the old man's actions and retreated towards where the Noble Beast was at, not noticing the spectre of death that followed him.

The Noble Beast continued to eat the corpses as his subordinates stacked them up in front of him, but quickly froze and turn his attention when he sensed the aura of a strong practioner getting near. Smiling the Noble Beast stood and awaited the arrival of this being with excitment as he was feeling bored by all the weaklings around him.

In just a couple of minutes the Beast General from the rooftop quickly made his way towards the noble where he then bowed and gave an account of what he had witnessed. Smiling the Noble Beasat ignored the General walking towards to the the area in which the spectre was hidden.

"Come Out, I know you are there" the noble beast spoke. Out of thin air the George appeared, suprising all the other beast as they did not sense his prescense.

"You should leave this place" George suggested towards the Noble Beast,

"Why is that Elf?" the beast questioned.

"Or else you will die" George asnwered without emotion.

The Beast walked towards George as its humanoid figure towered above him by two feet. Looking down on George the beast spoke.

"A mere Elf dares threaten this Noble One" the beast asked menacingly. As if replying to the beasts taunt, George raised his leg and gave the beast a straight kick that blasted him flying backwards towards his horde landing hard.

The sorrouding beast roared in rage as they all swamped the lonesome George from all sides. George gripped his dagger and made his way through the horde slashing, stabbing and slicing apart anything that stood in his path.

A Beast Heir crossed his path as he clawed towards Georges neck with haste, George easily dodged the claws, ducking down he sliced towards the Heir arm fully cutting it off as the Heir roared and backed away. Not missing the chance, he pursued the Heir and lodged the dagger through the left side of his neck, pushing it right and lifting the Heirs head of its body.

The Nobled Beast getting back up from the kick witnessed the death of one of his Beast Heir as he went mad with rage. He quickly dashed towards George who was single-handedly cutting up members of his Horde. He quickly reached George, using all his strength he clawed at the George's blade, pushing him back. George jumped back while doing some backflips for a couple yards negating the force behind the Beast Nobles attack and grinding his legs to a full stop.

"YOU ARE DEAD, ELF!!!" the noble beast shouted with fury.

So Now we have Elfs