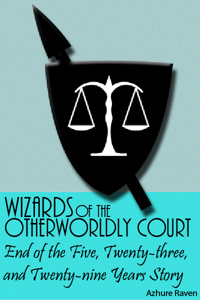 End of the Five, Twenty-three, and Twenty-nine Years Story - Wizards of the Otherworldly Court

"Dad? I think I got a really bad fever, why do I still feel fine?"

Five years ago, Owen lost his father to the unknown. But that wasn't the beginning of the story.

Maybe it began twenty-three years ago when Ronald Bell and Joshua Ruze saved the Illyer family.

Or perhaps, it all started twenty-nine years ago, when Ronald, the son of the wealthiest merchant, became a Court Wizard.

Well, it doesn't matter anymore, for the story five, twenty-three, and twenty-nine years ago shall now meet its end.

2nd book written in the Wizards of the Otherworldly series.

This story is split into two 'Collections,' Ronald's Collection and Owen's Collection, each centering around those Court Wizards.

This is an original novel that I wrote and not some WN translation although it took inspirations from Japanese Light Novels.

Wizards of the Otherworldly Court is a story about the Otherworldly Court, an inter-dimensional (or world-hopping, you get the idea) organization made up of people of all ages, gender, race from many parallel or different worlds. They are granted magical powers (though they did not call it magic) and called themselves 'Court Wizards'.

They are tasked to watch over the many worlds they come across (though most primarily dealt with their homeworld) and stepping into these worlds on 'missions' to preserve the 'life' of said worlds in the shadows.

However, these missions partially or even fully oppose their nature, personal interests, and ideals. Yet, most of the Court Wizards are aware and willing to complete even the most depraved missions that would shatter their reality regardless, either growing or regressing because of it.