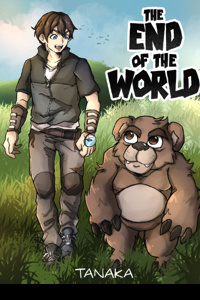 The End of the World

A tree topples amid the densely packed woods as the usual tranquillity on Stonehaven Island is broken with a thud. In one corner, an intimidating monkey-like creature towering above the shrubbery and debris surrounding him; the beast’s maw slobbering and ivory teeth clenched. The beast is known to the locals as ‘The Island King’ and has made the grove known simply as Stonehaven Forest its home for decades. The beast slams its gargantuan fists on its furry, raven chest and lets out a blood-curdling yell.

The beast’s opponent steps forth; a young man barely reaching the height of the monster’s waist. The challenger’s dark auburn hair flutters as a gust of wind blows across the clearing; his bright, sapphire eyes fixed upon his foe. Although well built for a human, the boy's physical size is dwarfed by his monstrosity of an opponent; making the boys well-toned arms look like matchsticks. The two stare at each other for a moment that must have felt like an eternity with the atmosphere as thick as honey; the anticipation building as the seconds passed. The intimidating roar of the bloodthirsty creature had not had the desired effect with the boy unflinching in the face of his monstrous foe.

The boy lifts his hand and beckons the beast to approach; taunting the simple creature into breaking the deadlock. Enraged, the chimp duly obliges and charges towards his pint-sized opponent; his fists beating the floor as he gallops on. The Island King leans back onto its hind legs and launches a vicious flurry of fists towards the brave warrior. The underdog jumps backwards dodging multiple blows before being forced to block a ferociously powerful straight punch. The blow sends the warrior flying backwards with bushes and trees crumbling through the weight of the resulting shockwave. The arrogant beast begins beating his chest in celebration; believing himself to be victorious.

Suddenly, the young man emerges from the overgrown shrubbery and darts towards the oversized antagonist. The beast throws a desperate fist at the fast-moving threat but it is swiftly avoided and countered with an overwhelming kick to the chest; stunning the enemy and leaving him open. The young man grabs the giant beast’s tree trunk-like arm and spins the beast with an overwhelming show of strength before launching the startled creature high into the air, amongst the branches that previously quivered at the beast’s roar. The force imparted onto the beast sends him into a seemingly endless spin-cycle resulting in the beast becoming disoriented and inactive. The beast reaches the arc of his flight and begins tumbling towards the ground. Would the fall end the beast or would it again rise to strike down its worthy foe?

The Island King falls towards the ground and inches before impact the open palm of the young man thrusts forward rapidly; striking the monkey in the chest and propelling the beast through multiple trees and into the rocky cave the beast calls home. The creature is motionless; the young challenger victorious. With a smirk and a wink, the young hero bows towards his defeated opponent; thanking it for the fair bout they had fought. This young man is Hiro and it is from here, that his story begins.

Support "The End of the World"

Bio: I am a student at a bad university wasting the government's money studying Japanese. I have always wanted to write novels and believe this is the perfect place to start. Currently lamenting my lack of success with The End of the World Series.