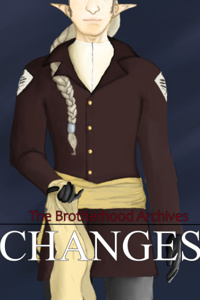 Changes is a collection of three stories that take place after the events of Edict. It would benefit the reader to read both Hy'Ruh-ha and Edict.

Story one: The Monk and The Princess

After a several months break from duty, Soletus, is asked to serve by the Patriarch as an escort to a conference the Brotherhood is attending. The only catch is he's acting as a second warden because someone wants him promoted. All he has to do is be at his best. However, his best is put to the test as he led surly men and then get whisked off to solve a disturbing plot with a determined and bored princess.

Notice: Please note, that Soletus, aka main character is asexual. That is part of being a neth elf. This story delves into information about it neth and gets into the neth elf experience a few times in this story. You've been warned.

Also note: As much as I didn't want to put it in this story, avoiding it was a futile effort on my part. There were things I needed to explain about Soletus and it's hard to write personal tales about character when avoiding talking about certain personal aspects of them.

Story Two:  The Sun and Stars - Summary and Date TBA