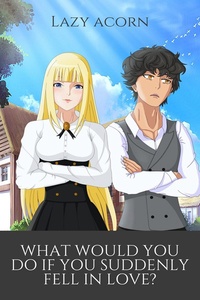 Positioning herself over Sian, Milka placed her hands on his chest and lifted her hips. With no hesitation at all, she used her fingers to drive his cock into her soaking wet pussy.

“This is good...” Sian moaned as Milka’s hot, tight pussy engulfed the tip of his cock.

While he was still in delight, she released her full weight. Like a hot knife stuck in butter, Sian penetrated her to the base.

Wasting no time, Milka began to move her hips back and forth while whimpering with pleasure.

Not containing himself, Sian stretched out his arms and grabbed the huge breasts that swayed in front of him and pulled them out. Following his hands, Milka leaned forward and rested her hands in the bed, on the sides of his head.

Close enough, Sian took both of her nipples into his mouth and used his tongue to play with them.

Even though Milka's moans made it apparent that she was feeling pleasure, it still seemed not enough for her.

Her moans increased as her hips slammed harder and faster against Sian's groin.

Sharing the same feeling, Sian matched his movements with hers and began hammering her from bottom to top.

As Milka's whimpers became more audible and her pussy tighter and hotter, Sian stopped her hips with his hands.

Before she could react, he spun them around, making her lie on her back on the bed as he stood over her.

Grabbing her ankles, he looked at the view before her eyes. For a moment, Sian stood in awe.

It was hard to choose which place to look, whether it was her wheezing chest with drops of sweat or her soaked pussy that was swallowing the entire length of his cock.

"Mastan~~ Please move. Give pleasure to this indecent slave."

Coming out of his trance due to Milka's whimpering, Sian moved his hips slowly.

As Sian escalated his speed, he pushed Milka’s legs apart until they reached over her head. This caused her ass to be lifted off the mattress, enabling Sian to go deeper inside her.

As Milka screamed and squeezed Sian harder and harder, the more excited and aroused he became. As a result of his movements, her big sweaty breasts were dancing wildly as wet sounds came out of the junction of their genitals.

"You look better than last time," Sian mumbled between strokes.

"I learned, some, techniques in, the, sacred treasure." She said as she moaned.

Continuing like this for quite a while, Milka shouted, "I'm almost there, mastan, I will-"

With a sudden movement, Sian pulled away and spun her around by her ankles, making her face down on the mattress. Since the force he used was considerable, this was not something he would do to Ophi, but since it was Milka, she would endure even if he was more rough.

"Why torture me? I was almost there." Milka pouted as she faced Sian. "To torture a poor slave in need, master is such a bully."

Giving her a big slap on her ass, Sian said, "A slave has no right to complain."

"Ahnn, that's right mastan~~ I was a bad girl." Lifting her ass and keeping her face to the bed, Milka said, "Please punish this indecent slave."

Grabbing her tail with one hand, Sian slapped her soft ass several times. Although it was not as big as Ophilia's, with each slap he gave, several ripples formed.

Even though her ass had turned red, given Milka's personality, instead of punishment, the slaps gave her more pleasure.

The more she got, the more of her natural lubricant oozed from her slit onto her thighs or dripped onto the bed.

Sian pulled her tail, bringing her ass closer to his cock and said, "Get on all fours."

Once Milka had positioned herself in front of him, Sian took his cock and rubbed the tip a few times at her entrance before accommodating it at her entrance.

Grabbing her hips, Sian sunk inside her and immediately began hammering her ass.

Proving the effectiveness of the slaps, her moist interior was burning.

"Yeah, mastan~~ rape this poor slave as you wish."

Ignoring her cries, Sian contemplated at the sight of his shiny cock slipping in and out of her pink slit.

As Milka's screams became louder and louder, she seemed to be at her limit. Realizing this, Sian grabbed her horns and pulled them back as he began to strike her ass with short, quick strokes.

When Sian was also reaching his limit, Milka shouted.

Dropping her face down onto the mattress, Sian mounted over her soft ass and continued impaling her. Because of the way she squirmed and moaned beneath him, it was obvious that her pleasure had intensified, driving her to extreme ecstasy.

With each stroke of her ass, the mattress sank and rose with her hips. Taking advantage of the reaction, Sian drove deeper and harder.

At this rate, it was only a matter of seconds before Sian felt his charge coming.

Pressing his crotch against her ass, he began to release everything while moaning contently.

Milka screamed as semen overflowed from her tight pussy.

Finishing releasing his entire load, Sian let his body fall onto her back.

After recovering his breath, Sian rolled to the side and looked at Milka, who was still reveling in the result of her climax.

Lying on her back, she looked up at him. Her face was red as a beet and full of sweat. But above all, she had a huge smile of conquest on her face.

"I fell for your provocation..." Sian lamented.

I tried to do an S&M scene, but ended up failing miserably. I felt it ended up not being as aggressive as I wanted it to be.

Anyway, living and learning. This serves as experience for the next one.