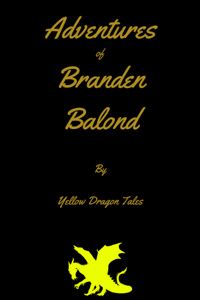 Young Branden Balond believes he understands the world. Unexpectedly, he finds himself journeying thousands of miles to find every kind of adventure imaginable. Meeting Dwarves, Elves, Halflings, Goblins, and many creatures even stranger, Branden soon comes to question everything he thought he knew about himself and the wide, wonderful world.

This gave me strong vibes from a blast from the past. The imagery is flowery and clear. Worth a read but there are a few gotchas.

YellowDragonTales's style is solid. He paints a vibrant world and gives a clear recollection of how the main character lives through his experiences. To the point that I'm jealous.

The story itself is a mixed bag, but that's probably because I'm reviewing it so early. I think once the full story is posed it may do well with a developmental edit to improve the hooks chapter to chapter. There were a few points where it dragged some, but I lack the editing chops to pinpoint exactly where those issues are, or how to fix them.

As with the style, the grammar is solid. There's not much to say here because it's always clear who is speaking, thinking or acting.

In the few short chapters on Royal Road, Branden has already showed measured growth; however, I beleive its impact is diminished by the experience being as early in the story as it was. It's difficult to tell how impactful the change was for Branden since we didn't know much about him before it reformed his views.

The side characters all leave their own mark and have personality. Even if they're quickly dismissed, you'll remember them.

An Intriguing Blend Of Styles

Describing the prose of Adventures of Brenden Balond poses a bit of a puzzle for the reviewer. The descriptions of scenery are not the most luxurious; the world-building is promising but not transcendent; the dialogue is not the snappiest one can find on Royal Road. But what the writing does possess is that elusive quality for which many an author strains in vain—that of immersiveness, of causing the reader to lose track of time and the world around himself as he discovers a new universe. This quality is made manifest as soon as the story’s introductory chapters, when the protagonist, thanks to the powers of a mysterious beast known as an “Olonto”, undergoes two out of body experiences—body-swaps of sorts with two animals. Though writing from an animal’s perspective is not all that uncommon in the genre, rarely is it handled as successfully as it is here, particularly in chapter four, and we encourage all prospective readers to at least persevere that far.

It must be admitted that to some extent, this success proves to be a double-edged sword, since the animal sequences and dialogue with the Olonto stand, if not head over shoulders, then at least a good couple of inches over the following chapters, which are satisfactory but have more in common with standard fantasy fare, featuring gruff dwarves, a bustling town, a tavern scene, and so on. For that reason we must confess our mild apprehension that the aforementioned scenes were merely one-offs. But this is a preliminary review for a reason, and it would be unjust to project too far into the future. We certainly hope the author will revisit the body-swapping idea, or will find another original means of impressing us. As for the half-star removed from the final score, we attribute that to a tone that is occasionally a tad too colloquial and modern for a medieval-inspired fantasy setting.

Having read through the available chapters once, then again for the purpose of this review, no grammatical flaws came to our attention. So far as titles on Royal Road go, this one ranks very highly in terms of grammar.

Here we encounter the work’s major drawback. While we have no complaints regarding the general premise adopted by the author—a young man leaves his backwater village or town, goes out in the wide world, sees his horizons expand, etc.; a difficulty arises when this classic formula is marred by plot holes from the onset. In the first chapter, Branden and his companions are attacked; he is the only survivor. The protagonist’s response after his recovery is somewhat baffling, as he grieves but categorically rules out a return to his hometown. Didn’t his comrades have family? Shouldn’t it cross Branden’s mind to return home to avert them to the deaths of their loved ones? Instead, before his comrades have even finished decomposing, Branden quite blithely decides to abandon his profession as a trapper in favor of gallivanting off to a new city where he has no apparent prospects at earning a living. Also of no concern to the protagonist are the possessions and property he is leaving behind in his current home, Burgeford—to say nothing of his own family. Even if we grant that he has no family and isn’t well off, it is still scarcely credible that he would uproot his life at the drop of a hat, and we would have much preferred a return trip to his hometown before commencing the adventure proper.

Additionally, this would have given us the opportunity to learn more about Branden’s backstory, which at present is very vague, as well as mitigated other inconsistencies, such as his paying a bridge toll with money he evidently had on him all throughout the hunting trip. Do trappers typically try to stealthily pursue prey while carrying jangling coin pouches? Probably not, but because there was no return trip, yet Branden needs to be able to secure lodging, it was therefore necessary to outfit him with the means necessary to start his life anew—as though he never intended on returning home prior to setting out. All this is quite contrived, and it is here that the author’s inexperience is most on display. We are interested in seeing where the story will go, and given the promising nature of his writing in every other aspect, we have confidence that he will soon improve in this area as well, but in the meantime these issues compel us to remove a full star.

The author’s dialogue rivals his powers of description, and we are most impressed by his ability to give his characters idiosyncratic speaking styles. From the Olonto to a hapless gambler in a tavern, there is a variety on display that most authors will envy. Though early in the story, the side characters introduced are already memorable, and this is an astonishing feat. The only weak link is the protagonist, who comes across as just a little too overweening. We have little doubt that there is a character arc planned, and that Branden will grow throughout the story and differ significantly by its conclusion, but even with that consideration in mind he comes across rather more as a young adolescent than the man we are told he is. Sometimes he is unrealistically flippant or immature; for instance, it’s scarcely credible that while at the mercy of a roaring Olonto that had slaughtered his comrades little more than a week beforehand, Branden would yawn in its presence and dismissively call it “Furry”. After a longer period of companionship, perhaps, but not this early. We are not fundamentally in disagreement with the idea of having a brash protagonist who needs to mature; care must be taken, however, to make this progression feel organic.

An intriguing start, and a world we look forward to discovering. That the author is serious about honing his craft bodes well for the story’s continuation.