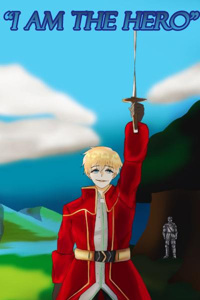 As the night takes over the skies, the two moon and stars shines down the city of Eyinas. There’s one place that seems like where most of the light from the skies shines down the most. It is as if spotlights were directed towards it, the place was none other than the adventurer’s guild building. A phenomenon that can’t be explain, it’s as if a powerful and beautiful being were behind this strange phenomenon. Well I will answer who’s the being in question here. The being that so beautiful and powerful to do this phenomenon is none other than… me!! AQUA!! I really should stop talking to myself. Well what I just said is what I usually do when I will show myself to these lowly humans.

As of now it is the perfect time to do it, for the night has already taken the skies. All I need to do is to shine some of the moonlights towards the adventurer’s building to show that I can control the night skies (well I usually control the clouds that is filled with water to cover the skies from giving off light to other areas, so that the light that the moons and stars shines can focus on the one area I want the it to be at). By doing so these lowly humans will think of me as the being who created this world, for they thought I can control the moons and stars, for I can shines its light to one specific area. I already did this a lot of times all of the humans that I’ve shows this trick were in awe. To be honest I did it because it was so dark the first time, I was trying to show myself to the first human I encounter, that I remove the clouds that were obstructing the moonlight that that lowly human thinks of me as I were the creator of the world. I felt such bliss from being thought of the being who created this world, even though my power is nowhere close to the superior being powers.

I have finally arrived on the adventurer’s guild building. I look around to find that human and finally saw him sleeping. Time to set the plan in motion.

The clouds block the moonlight, darkening the whole area of Eyinas, but the light was shining down on the adventurer’s guild. The bright light that came from the window of Francis that wakes him up.

Good he’s awake alright I just need him to stand in front of the window. Then I will make it look like that I came descending from the skies and enters his window and there I will talk to him. I will talk to him that will make the bastard meet his demise.

Francis stands up and went in front to the window.

Alright time to do it!

As Aqua went up the skies and went down towards the window with speed. Francis covers his window with curtain to block off the bright moonlight.

Aqua manage to slow down with just a few distance between her and the window.

THAT FUCKING MOLE MAN CLOSED THE WINDOW ON ME!!!

EVEN THOUGH I CAN PASS THROUGH THE CLOSED WINDOW, BECAUSE I AM A GREAT SPIRIT. BUT STILL BLOCKING THE WINDOW ALL OF A SUDDEN, WILL MESS UP ANYONE!! ESPECIALLY WHEN THERE GOING IN SUCH SPEED!!

Calm down me I guess he didn’t notice me cause of the bright light. Yeah that probably it. Guess I need to lower the brightness a bit and a way to open that curtain without me doing it, perhaps I can use the skies as my advantage by using the water on the clouds to push away the curtains.

Alright that’s the plan. First, I need to go above the skies once more for the descending from the skies act, then use the water on the clouds to push the curtains so that it won’t obstruct my way and then enters his room in such elegant that he will be in awe, lastly get his help to meet the bastard’s end. Time to do it.

Aqua went above the skies extends her arm then points at the curtains with her index finger. As she pointed at the curtain an amount of water quickly descends from the clouds straight to the curtains making it flutter around. Francis went in front of the window once more.

Alright the curtains are out of the way I need to enter it in such a way that will leave him in awe.

Aqua descend from the skies towards the window with such an elegant pose its as if a true Goddess was descending with such a godly smile. As she almost enters the window. Francis shut the window close. Aqua stops in her tracks still smiling, but it seems like veins popping out above her eye.

A sudden destruction on the front of the window. Tossing Francis from the other side of the room. Water covers the entire room of Francis. Aqua enters the room.

“Ara-ara seems like I just stop someone from dying from the hands of a demon” Aqua said with a smile on her face.

“Godd-goddess?!” Francis said and grovel in front of Aqua.

“What is a Goddess?”

“Ah yes, I am Aqua the Great Goddess Ahahaha”

Good he knows how to act in front of me and to think that this idiotic creature really believed that I am the one who created not just the world but the cosmos itself. Guess this mole man can still live to see the day and here I was planning to kill him and just ask help to another human like the human named Ash. Afterall I believe that the children will inherit things from their parent just like from one of the stories the bastard always read where one of the party member of the hero inherit the title of the chieftain of the elves when her father died it is from his story books he reads out loud whenever he can’t sleep or something. After hearing the story of that human named Ash, I believe he will inherit the title of Guild master from this mole man. I thought he won’t survive the blast from the first place that’s why I came up with an excuse by blaming It on demons, of course I need to come up with a story either way because Ash might come rushing in this room from the sound of the destruction, but it seem like he won’t I can hear a loud snoring next door probably that’s Ash . Now that I see some light in this mole man, by him groveling in front of me and calling me the Great Goddess Aqua. Perhaps I can still make use of him.

I already have a make up a story to make him join my cause I just need to tell him that. “Ah, yes I came here to save you from the demon that cause the destruction that you have witness”

“to think that the Great Goddess Aqua still remembers the name of this lowly huma- wait did you just called me mole man??”

“Oh, my greatest apologies Great Goddess Aqua it seems that old age is still a problem even though you have blessed this old body of mine to once again feel like in his prime”

“No need for apologies mole man”

“Uh…never mind. You have mention demons have attacked me causing this mass destruction of my room, but aren’t demon supposed to be a myth”

“I see, humans are indeed living in such peaceful life after the Great Demonic War, a war where demons once roam these lands destroying everything in their path. A war where Gods and mortals have to work together to defeat them and lock them away. “

“Yes, I was part of the Great Demonic War I used all my strength and remaining mana to lock up the demons, but it seems that the demons have destroyed the lock and now roams these lands, for the mana has become unstable for I have regain my mana. it’s only a matter of time for these vile creatures to mass up and continue their destruction.”

“To tell me all of this, what does that mean”

“You mole man the guild master of this city need to accept up all the people you can and remove the restriction on the quest for these are part of the plan to save the world from the demons. There may be casualty in doing so but it is part of the plan their sacrifice will not send to waste for their death contribute in saving this world from the hands of this vile demons”

“Now I shall take my leave for I need to stop the approaching end of the world; I trust everything in your hands”

Bio: I write trash novels in my free time :D. ( which I don't have that much )

I am bad at grammar that I know for sure.